The turmoil in Egypt has made many worry about our oil supply, seeing prices rise due to the conflict. The issue raises the question of where we should be getting oil to ensure the security of its supply. Obviously the first place is at home. But with the Obama Administration placing a moratorium on offshore drilling in the Gulf followed by a de facto ban, withholding the final stages of a permit from Shell to drill offshore in Arctic waters of the Beaufort Sea in Alaska[i], and withdrawing leases on Federal lands that contain vast resources of shale oil[ii], the only choice for the United States is to turn to oil imports for its supply.

Our neighbor to the north, Canada, provides the largest amount of our oil imports, followed by our southern neighbor, Mexico. But, here again, the Obama administration is holding the country hostage by withholding a permit for a pipeline to carry oil from Canada to the United States. The Keystone XL pipeline is in the hands of the U.S. State Department, who still has not determined its fate. A recent study commissioned by the U.S. Department of Energy (DOE) indicates that the pipeline coupled with a demand reduction could eventually eliminate oil imports from the Middle East. The study was released for Canadian Prime Minister Stephen Harper’s recent visit to the White House. But even the voice and encouragement of the Canadian Prime Minister could not get President Obama to endorse the pipeline.[iii] 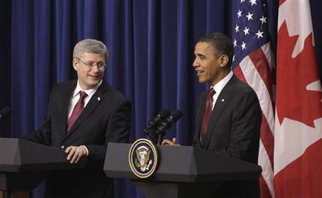 Why? Because most of the oil carried from the pipeline would be produced from oil sands that environmentalists say emit more greenhouse gases than conventional crude in its production. They also see the pipeline increasing the chances of an oil spill.[iv] Along with that, the Environmental Protection Agency is worried that these secure supplies would put a damper on increasing automobile efficiency and producing electric vehicles.[v] The agency believes that these secure oil supplies would lead to lower gasoline prices for consumers and reduce the incentive to buy more fuel efficient vehicles or electric cars. Instead, the Obama Administration is spending its energy trying to permit offshore wind power and issuing grants for solar power for electricity generation that are expensive technologies and do not directly substitute for oil.[vi]

The pipeline, if built, would carry oil from Alberta, Canada through Montana, South Dakota, Nebraska, Kansas and Oklahoma to Texas. The first phases of the 1,900-mile pipeline would double the capacity of an existing pipeline from Canada, carrying more than 500,000 barrels a day of crude oil. The following phases would add another 700,000 barrels per day for a total capacity of 1.29 million barrels a day. Increasing pump capability would increase capacity to 1.5 million barrels per day.[vii]

The project is estimated to cost $7 billion, employ 20,000 Americans, and add $20 billion to the U.S. economy.[viii] TransCanada, a Canadian firm, must obtain a permit from the U.S. State Department allowing the pipeline to cross the U.S.-Canadian border before construction can proceed. At one point last year, Secretary of State Hillary Rodham Clinton indicated that she was “inclined” to approve the project, but her department is now obtaining input on the project from government agencies and the public.[ix]

The U.S. Department of Energy commissioned a study conducted by EnSys that evaluated several scenarios using the WORLD model, World Oil Refining & Logistics Demand, to determine the impact of the pipeline. [x] Two demand scenarios were represented: one from the Energy Information Administration’s Annual Energy Outlook 2010 reference case and the other from the Environmental Protection Agency representing a lower oil demand outlook where the demand for petroleum products is 4 million barrels per day lower by 2030. The study used the Canadian Association of Petroleum Producers’ 2010 Growth Outlook to determine oil supply for market from the Western Canadian Sedimentary Basin. Between 2009 and 2030, the supply of oil from this area almost doubles from 2.49 million barrels per day to 4.85 million barrels per day. Over that time period, the fraction of crude that comes from oil sands increases from 65 percent to 91 percent.

Given that Asia, and particularly China, is a growing market for Canadian crude, the greenhouse gas emissions from oil sands production in Canada will still be emitted regardless if the U.S. buys the oil sands from Canada or not. Plus, additional emissions will be released through transporting it to Asian markets.

According to a study by the Cambridge Energy Research Associates, on a well-to-wheel basis, total greenhouse gas emissions from oil sands are only 5 to 15 percent higher than the average crude oil consumed in the United States. The calculation is based on the total life cycle that includes oil extraction, processing, distribution, and combustion of the gasoline through the tailpipe (hence, well to wheel).[xi] According to the Environmental Protection Agency, the amount of carbon dioxide emitted from the tailpipe per mile traveled is constant—19.4 pounds of carbon dioxide per mile regardless of the origin of the oil. The Canadian arm of Statoil has pledged to decrease the carbon dioxide emissions from their production of Canadian oil sands by 20 percent by 2020, and 40 percent by 2025, with the help of technologies that should be on line by 2015 or 2016.[xii] 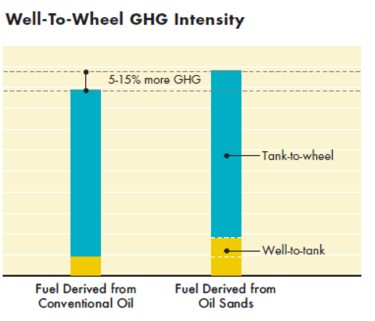 Our federal government is restricting oil drilling in this country by withholding permits on offshore U.S. areas under their control or withdrawing leases on federal lands. Now, they want to restrict the crude we get from a friendly neighbor, Canada, by withholding a permit on a pipeline that can bring secure supplies of oil to U.S. refineries. Instead, they want to push offshore wind and solar technologies by providing grants and subsidies to hopefully make them competitive some day. Europe has tried that and not succeeded. Decades of promises have been made by those industries that they can become cost competitive with fossil fuels, with costs still 50 to 400 percent higher.[xiii] When will our government learn from history and the experiences of others?

EPA Will Destroy Jobs, Not Create Them