The major integrated oil companies are expected to soon start releasing their interim third quarter earnings reports. Analysts expect the reports to show large—perhaps record-breaking—profits. With a sputtering economy and an election right around the corner, we can be sure some lawmakers will excoriate “Big Oil” for kicking the consumer when he’s down. Indeed, some policymakers will no doubt renew calls for windfall profits taxes on oil companies. Using history as a guide, such punitive tax increases are harmful to consumers, as profitable oil companies are a source of strength to the U.S. economy, especially in these dire times.

High profits are the market’s signal that a company is efficient, that it is taking resources and transforming them into products that consumers value.  In contrast, a company suffering losses is wasting scarce resources, and needs to get its act together or else go out of business.  If the major oil companies report large earnings as expected, this will demonstrate that their shareholders and management made wise decisions in the preceding years, as they built and maintained the infrastructure needed to bring vital product to market.

The wise decisions of the oil industry stand in sharp contrast to the investments made by the banking and real estate sectors during the last few years.  Academics and pundits will no doubt argue about the exact causes for decades to come, but the fact remains that too many mortgages were given to unqualified applicants, and too many financial institutions bought the derivative assets tied to these risky loans.  Because of these errors, the American financial sector has suffered billions in losses, and the S&P 500 is down more than 30% year-to-date.

Profitable companies are always a sign of economic strength, but they are especially welcome during a general downturn.  Oil industry earnings show that not every corporation was asleep at the switch during the last few years.

Who Owns Big Oil? You Do!

Populist pledges to stick it to “Big Oil” conjure up images of Texas tycoons in back rooms, puffing on cigars while stuffing piles of money into their pockets. In reality, more than 70% of the shares of large oil companies are owned by mutual funds, IRAs, pensions, and other such institutional investors. Solid earnings reports by the oil industry translate into more money for retirement. 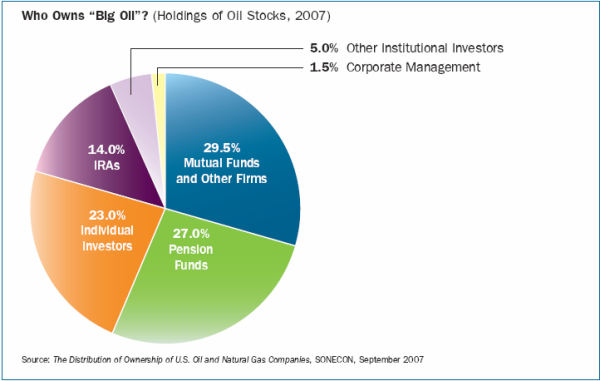 As noted earlier, some lawmakers have proposed a windfall profits tax as a way to being relief to motorists.  They see large profits and high oil prices, and assume that the greedy oil companies are successful only because they gouge their customers.  But this mentality gets things exactly backwards.  Large industry profits aren’t causing high oil prices; rather, it is the high price of oil—set in the world market by supply and demand—that is partly responsible for the large earnings in the oil industry.

Slapping producers with a windfall profits tax won’t bring relief at the pump.  On the contrary, new taxes will increase oil and gasoline prices, by reducing the incentives for producers to supply oil.  This is Economics 101:  When the government wants less of an activity, it taxes it.  (For example, to discourage people from smoking, the government slaps a hefty tax on cigarettes.)  So if the government wants oil companies to bring fewer barrels to market, reducing supply and raising the price of oil, then by all means, it should follow politicians’ plans to raise taxes on oil production.

We have been down this road before.  As part of a compromise to phase-out price controls, President Carter enacted a windfall profits tax on oil companies in 1980.  From 1981-1983, the count of rotary rigs (used to drill the vast majority of wells) in the U.S. fell in half. A Congressional Research Service report found that the 1980s windfall profits tax reduced domestic output between 1.2 and 4.8 percent, and increased American reliance on foreign oil imports. This time around, the effects could be even worse, because the new windfall tax would not be coupled with a lifting of price controls.

As the following chart illustrates, the oil industry is already paying many billions of dollars into the Treasury.  Even without tinkering with the tax code, higher earnings lead to larger payments.  It is bad policy for the IRS to target the most successful companies and slap them with punitive taxes, simply because they have deep pockets.

For FRS Oil and Gas Companies 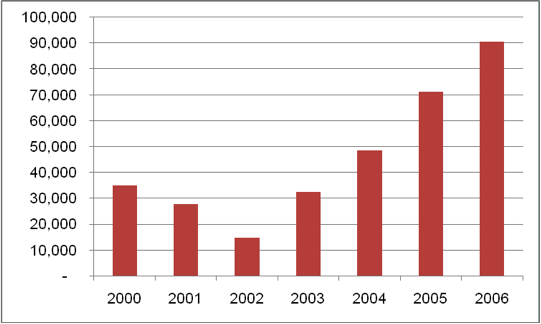 More Supply Is a Realistic Solution

Although more taxes and regulations aren’t the answer, there are steps the federal government can take to help.  Specifically, the government can give its permission for American energy companies to develop American resources.  The federal government recently let expire the decades-long moratorium on offshore drilling and oil shale development, but there still remain significant regulatory and legal hurdles to actual production, and naturally the politicians are looking to renew the ban after the elections.  Policymakers must realize that encouraging new domestic energy production will help on several fronts.

A recent Congressional Research Service (CRS) report [pdf] estimates that by lifting the embargo on Outer Continental Shelf (OCS) production, the federal government would generate almost $615 billion in royalties and corporate income taxes.  However, the results would actually mean even more, since the Department of Interior admits readily that its estimates of embargoed oil and gas resources are conservative, and the CRS report assumes the coastal states adjacent to the OCS areas would receive an additional $260 billion in royalties (is California listening?).

In addition to offshore resources, ANWR, oil shale and other domestic energy resources have been systematically put off limits through outright statutory ban and through crippling legal action by environmental groups.  Legalizing and then streamlining the development process on these sources of domestic energy would yield still more in royalties, direct and indirect jobs, and corporate taxes receipts.  Note that the extra revenues flowing to the government from these sources would not constitute a new drain on the American economy, as would the tax hikes proposed by some politicians.  If it is illegal to produce a valuable product for consumers, and then the government changes the rules and says it is now legal but the producer must give a cut to the Treasury, on net that is a boon to production.

Besides creating thousands of new jobs and easing the government’s budget deficit, opening up American resources to development would bring immediate price relief, even though the new production might take several years to reach full capacity.  This is because the promise of more barrels of oil in the future will cause current producers to ramp up their output in the present, while the new competing American sources are still in their infancy.  The chart below illustrates just how much policy changes can influence prices today. 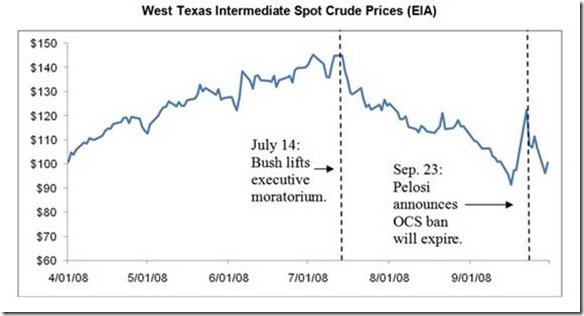 American citizens should welcome reports of profitable companies. The news signifies the efficient use of resources, but it also helps to offset the tremendous losses being incurred in other sectors. Rather than punishing success with higher taxes, the government should instead pursue policies that speed the development of American energy resources. Such development will create jobs, strengthen the US dollar (through reduced oil imports), help defray the costs of the Wall Street bailout, and reduce oil prices even further.