The builders of the Keystone XL pipeline have waited over 5 years for an answer from the Obama Administration regarding whether or not a pipeline from Canada to the United States is in the “national interest.” That Presidential determination is required to build the northern leg of the pipeline from Canada to Nebraska, where it will meet up with other pipelines that will bring it to the southern leg that has already been built. Presidential approval is needed because the pipeline will cross an international border. The U.S. State Department has performed a number of reviews, but President Obama is still delaying the decision waiting for still another review. Meanwhile, he stated last year that he will only approve the pipeline if it would not lead to a significant increase in carbon-dioxide emissions. What that exactly means is unknown since the ‘measure’ and definition of ‘significant’ were not provided. It is expected that the State Department’s current environmental impact analysis, which could be released in the next few weeks, will include whether the pipeline would lead to more carbon-dioxide emissions. 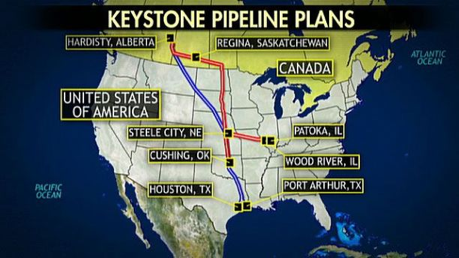 The State Department’s past analyses have made it clear that Canada will produce oil sands and will export it to someone–if not the United States, then Asia, and most likely China. Under those circumstances, the issue becomes whether more carbon dioxide is released by shipping the oil sands to Asia or by piping it to the United States. Also of interest would be the carbon dioxide emissions associated with obtaining the heavy oil that U.S. Gulf Coast refiners would use in lieu of the Canadian oil sands. A Consumer Energy Alliance analysis provides some insight into these issues.

The analysis found that shipping oil to China via tanker would be 97 percent more carbon intensive per barrel than shipping the oil sands to the United States via the Keystone XL pipeline. Further, the study found that U.S. refiners would import heavier crude from the Middle East to replace the Canadian crude, and that shipping transaction would be almost 50 percent more carbon intensive per barrel than transporting the oil via the Keystone XL pipeline. Clearly, not only will more carbon dioxide emissions result, but sending oil longer distances will cost more, which consumers will have to pay.

Although a presidential permit is not needed for the southern leg of Keystone from Cushing, Oklahoma to Texas refineries on the Gulf Coast, President Obama announced his support and the southern leg has been completed and will begin moving crude this month. Oil stored at Cushing hit record levels as the infrastructure to move it to processing centers is insufficient to handle the production renaissance that hydraulic fracturing and horizontal drilling unleashed in the United States. The limited infrastructure growth to carry the crude to the refineries along the Gulf Coast forced the build-up of stocks at Cushing and kept U.S. oil prices low.[i]

Alternatives to the Northern Leg of Keystone

Canada plans to produce its oil sands and to export what it does not need domestically. So, if the oil is not headed for the United States, it will be shipped elsewhere. Two pipelines from Alberta to the Pacific Coast have been proposed–the 530,000 barrels per day Northern Gateway line to Kitimat, British Columbia and the expansion, from 300,000 barrels per day to 890,000 barrels per day, of Kinder Morgan’s Trans Mountain line to Vancouver, which the company wants completed by 2017. Last month, Canadian energy regulators recommended approval but with 209 conditions for Enbridge, Inc.’s Northern Gateway pipeline, leaving the final decision up to the federal government.[ii]

TransCanada Corp. also plans to convert a gas line to oil so it could transport as much as 1.1 million barrels a day of crude to refineries in eastern Canada.

Rail is also an alternative for transporting the oil to the United States or to the western coast of Canada. Imperial Oil Ltd., an oil-sands producer, and Kinder Morgan are planning a 100,000 barrel-a-day loading terminal in Edmonton to accommodate three trains a day with more capacity expansion in the future.  Investments in rail cars that carry crude have also increased. The capacity of rail terminals to load crude oil in Alberta and Saskatchewan is expected to quadruple by the end of this year to 905,000 barrels a day from 224,000 barrels per day, according to a report by Calgary investment bank Peters & Co. According to the Canadian Association of Petroleum Producers, an average of 175,000 barrels of oil were shipped by rail to the United States each day this year (about 75,000 barrels of it heavy oil), compared to about 45,000 barrels of oil per day shipped on average in 2012. Thus, Canadian crude is finding its way to markets without the Keystone XL.

A few derailments in moving oil, the most recent in North Dakota, have renewed the debate over whether it is safer to ship oil by rail or pipeline. The North Dakota accident is the fourth major North American derailment in six months by trains transporting oil. Record volumes of oil are moving by rail as production from mainly North Dakota and Texas has pushed domestic oil production to the highest level since 1988.[iii] 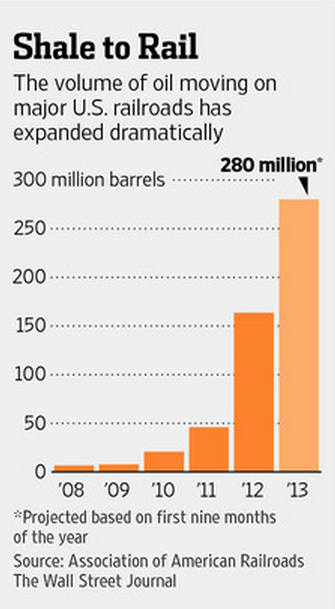 If the Keystone pipeline does not get approved, the Consumer Energy Alliance assumed that Canadian producers will transport their oil by pipeline from Alberta to British Columbia and then ship it by tanker to Asia.  They assumed that 730,000 barrels of Canadian crude would be shipped to Asia since the Keystone pipeline is to ship 100,000 barrels of U.S. oil besides the 730,000 barrels of Canadian oil. Based on an estimate by Barr Engineering, the Council found the carbon intensity to be 97 percent greater to ship their oil to Asia than to move it by pipeline to the United States. An oil tanker traveling the 5,673 miles between Kitimat, British Columbia to Ningbo, China would generate 20.76 kilograms of carbon dioxide equivalent per barrel compared to the 10.529 kilograms carbon dioxide equivalent per barrel generated by the Keystone XL Pipeline moving oil to the United States.[iv]

If oil-sands production is shut down or headed to Asia, the United States will import oil from other places such as Venezuela or the Middle East, and carbon dioxide emissions associated with its production, consumption and transport will be higher on average than with oil sands.

The Consumer Energy Alliance assumed that if the United States cannot import crude oil from Canada via pipeline then Gulf Coast refiners will import oil from the Middle East, particularly Kuwait, Iraq, and Saudi Arabia, rather than Venezuela and Mexico where there are declines in oil exported to the United States. The carbon impact of seaborne versus pipeline transport of crude oil is significant—imported heavy oil by sea from the Middle East would produce almost 50 percent more carbon dioxide emissions per barrel than Canadian oil via the Keystone XL Pipeline.

Americans are In Favor of Keystone

A recent national poll by Bloomberg shows strong support for the northern leg of Keystone with 56 percent of respondents viewing it as a chance to reduce dependence on oil imports from less reliable trading partners, compared to 35 percent who do not support it. The poll also quizzed respondents on the delay by the Obama Administration in making a decision on the pipeline where 61 percent believe the delay in approving the pipeline is due to the potential political problems it would create with environmental groups rather than on “legitimate concerns” regarding an increase in carbon dioxide emissions.[v]

TransCanada has waited patiently for over 5 years for the President to decide if the northern route of the Keystone XL pipeline is in the “national interest.” According to Jack Gerard, president of the American Petroleum Institute, “It’s taken longer to approve the Keystone XL pipeline than it did to win World War II, longer than it took us to put a man in space, and almost as long as it took to build the Trans-Continental railroad 155 years ago.”[vi]

Regardless of where one stands on the issue of whether carbon dioxide emissions pose a significant threat to the environment, it is clear that this is not a substantial issue in the matter of the Keystone XL since not building it may result in even more worldwide carbon dioxide emissions.  The argument is quite simply, a red herring.

Americans favor construction of the Keystone pipeline, so why can’t the President?