Would you like to live in a state with low unemployment and low energy prices? If so, Oklahoma may be the state for you. Oklahoma’s unemployment rate is less than 5 percent, while the nation’s is at 8.2 percent. Oklahoma’s average gasoline price is the12th lowest in the United States, 4 percent less than the nation’s average gasoline price, and its electricity prices are the 10th lowest, 22 percent lower than the average electricity price in the nation.

Oklahoma is rich in oil and natural gas resources. Many of the largest oil and gas fields in the country are found in the geologic basins within the state.  The state’s economy is heavily dependent on the oil and natural gas industry. Oklahoma is the 5th largest oil producing state, producing more than 3 percent of U.S. crude oil production. Oklahoma has more than 125,000 producing oil and natural gas wells, producing more than 74 million barrels of oil the United States would otherwise have to import each year. Crude oil wells and gathering pipeline systems are concentrated in central Oklahoma, although drilling activity also takes place in the panhandle. Two of the 100 largest oil fields in the United States are found in Oklahoma.

The city of Cushing, in central Oklahoma, is a major crude oil trading hub connecting Gulf Coast producers to Midwest refining markets. In addition to crude oil produced in Oklahoma, the Cushing hub receives oil supplies from several major pipelines in Texas. Traditionally, the Cushing Hub has supplied crude oil from the Gulf Coast and Mid-Continent areas to Midwest refining markets. However, because production from those regions had been in decline, the crude oil pipeline system was reversed to deliver crude oil produced in Alberta, Canada, to Cushing, from which it can access Gulf Coast refining markets.  More recently, due to the boom in shale oil production, the pipeline is again being reversed to deal with the oil glut that has built up around Cushing.  Cushing is also the designated delivery point for NYMEX crude oil futures contracts.

Crude oil supplies from Cushing are also delivered to Oklahoma’s five refineries, which have a combined distillation capacity of over 500 thousand barrels per day, about 3 percent of the total U.S. refining capacity. Several petroleum product pipelines (e.g. the Explorer pipeline) connect those refineries to consumption markets in Oklahoma and nearby States.

Beginning in the mid-1980s, Oklahoma oil and gas production had begun a steady decline, but it still remained a considerable source of employment and revenue. In 1992, the Oklahoma State Legislature created the Commission on Marginally Producing Oil and Gas Wells to keep the decline in production to a minimum. The Commission was organized to help oil and gas operators to sustain production from marginally producing wells. In recent years, they have accounted for over three-fourths of Oklahoma oil production and about one-tenth of the State’s natural gas production.

Oklahoma ranks 22nd in coal production with small coal deposits located in Eastern Oklahoma.  But, most of its coal comes from Wyoming via rail. Coal- and natural gas-fired power plants dominate electric power production in Oklahoma, producing almost equal amounts of electricity. Oklahoma also has hydroelectric potential in several river basins, as well as wind and solar potential, primarily in the western portion of the State. Oklahoma produces almost 10 percent of its electricity from renewable sources, mostly wind and hydropower with some minor production from biomass. About one-fourth of Oklahoma households use electricity as their primary energy source for home heating. 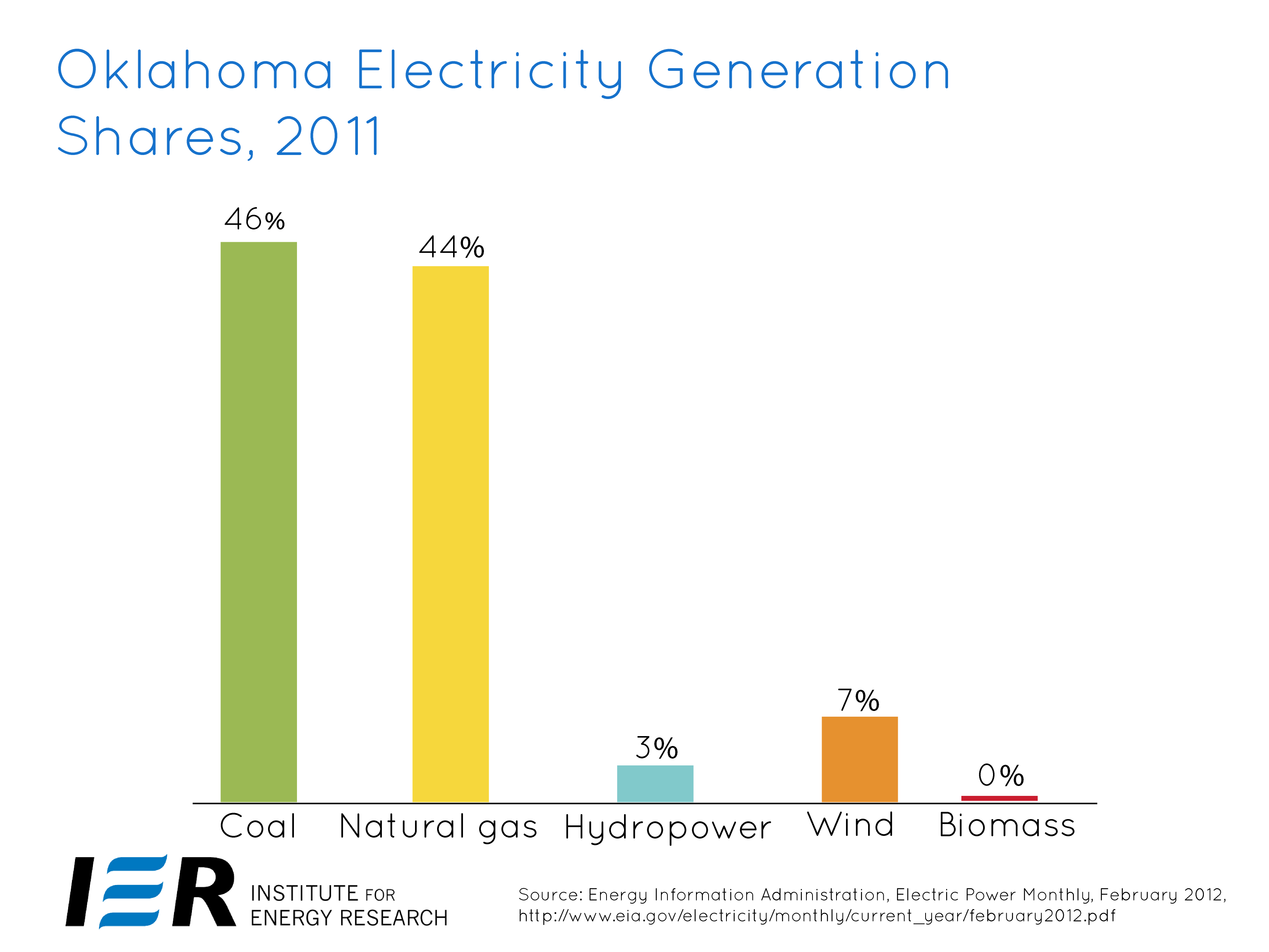 Affordable energy is a vital component of a productive economy. Because regulations tend to increase the cost of energy making it less affordable, Oklahoma has chosen to limit regulations within the state, abiding by those set by the federal government, but not implementing many of the regulations and mandates that other states have imposed.  For instance, 30 states have a renewable portfolio standard (RPS) that mandates that a specified share of electricity be produced by renewable fuels in the future.  Oklahoma does not have an RPS. But states that do tend to have higher electricity prices because renewable sources of energy are more expensive than their fossil fuel counterparts.

Oklahoma does have a net metering policy, which has been in effect since 1988, to allow the connection of small renewable energy generation. Net metering allows consumers who own renewable energy facilities to receive retail credit for electricity that is in excess of their own use and that is provided for sale to the electricity grid.

Because of its favorable regulatory environment, Oklahoma has the 10th lowest electricity prices in the country, more than 20 percent below the national average.

Oklahoma has provided favorable policies and few regulations, making energy affordable for its residents. The state ranks in the top five for the production of oil and natural gas, from which it obtains revenues through production taxes and royalties for state projects, and provides high-paying jobs, keeping the state’s unemployment rate below 5 percent.

One Born Every Minute: A Primer on Carbon Taxes