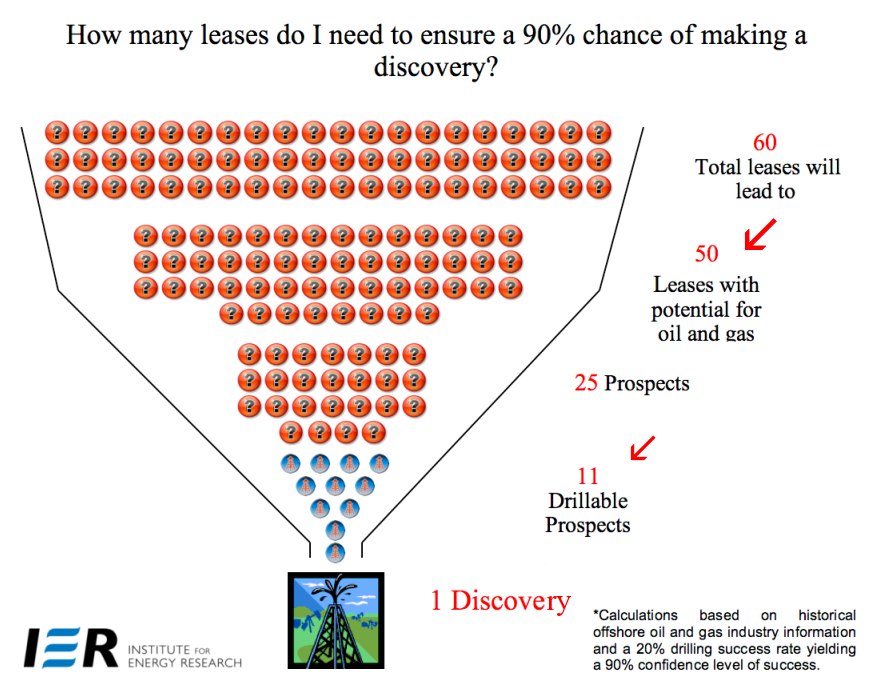 Washington politicians are accusing oil companies of “stockpiling” federal energy leases to keep supplies low and prices high. They claim “Big Oil” holds leases for 68 million of acres of federal leases that are not currently producing energy.  The following will help separate fact from fiction in the “68 million acres” sound bite.

The Claim: “Energy companies are not using 68 million acres of federal lands already open to energy development.  If we extrapolate from today’s production rates on federal land and waters, this means that Big Oil is stockpiling an additional 4.8 million barrels of oil and 44.7 billion cubic feet of natural gas each day.” – The Truth About America’s Energy: Big Oil Stockpiles Supplies and Pockets Profits , page 2.

The Extrapolation: To arrive at the production numbers above, it appears as though the authors of the report “extrapolated” as follows:

• Roughly 3 times as many onshore and offshore federal acres – or about 68 million – are leased to oil companies, but not currently producing oil or gas.

Therefore, the authors conclude, the United States could be producing 3 times as much oil – or an additional 4.8 million barrels per day – if the lease holders for the non-producing federal lands started producing oil today.

The Reality: America Cannot ‘Extrapolate Its Way Out of an Energy Crisis

Using the very same extrapolation, the Institute for Energy Research has calculated that the United States could produce an additional 160 million barrels of oil per day if the government leased all 2.46 billion onshore and offshore acres in the federal estate. That’s almost double the amount that is produced on a daily basis in the entire world.

Using the very same extrapolation, the Institute for Energy Research has calculated that 9.4 billion non-produing acres of the moon could produce an additional 654 million barrels of oil each day. 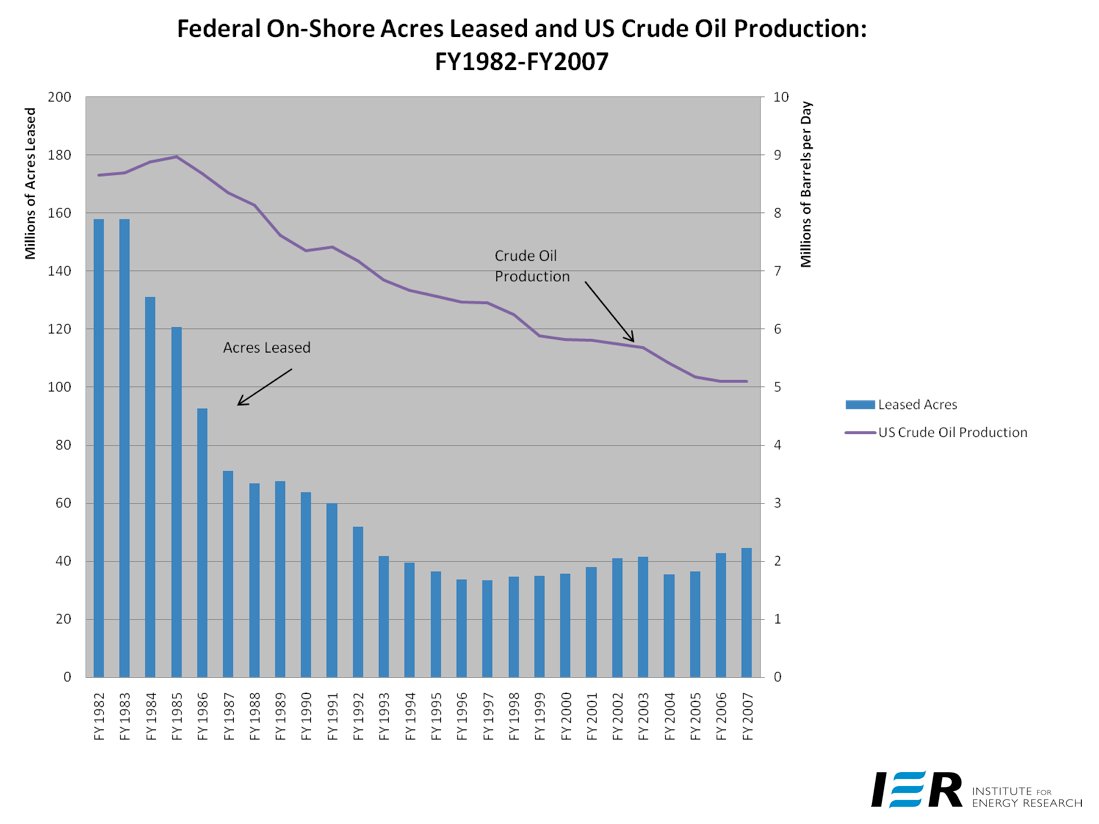 It seems the lawmakers would have us believe that obtaining a lease was a virtual guarantee that the lease holder would strike oil and gas, or both. In reality, not every acre of federal land contains oil and gas. If it were true, who wouldn’t be on line at the Department of Interior trying to buy an acre or two for themselves?

The chart to the right illustrates the correlation between the acreage of federal lands leased and the amount of crude produced over the past 25 years.

Unfortunately, there are no guarantees. Oil and gas might be found during the exploration phase of the lease, or it might not. This process, and those that involve satisfying all of the government requirements, defending against frivolous environmental lawsuits, and preparing to drill if energy is found can take a long as a decade.

The Truth & The Laws

Energy companies cannot “stockpile” leases (even the ones that are found to contain no oil or gas) in order to drive up prices: 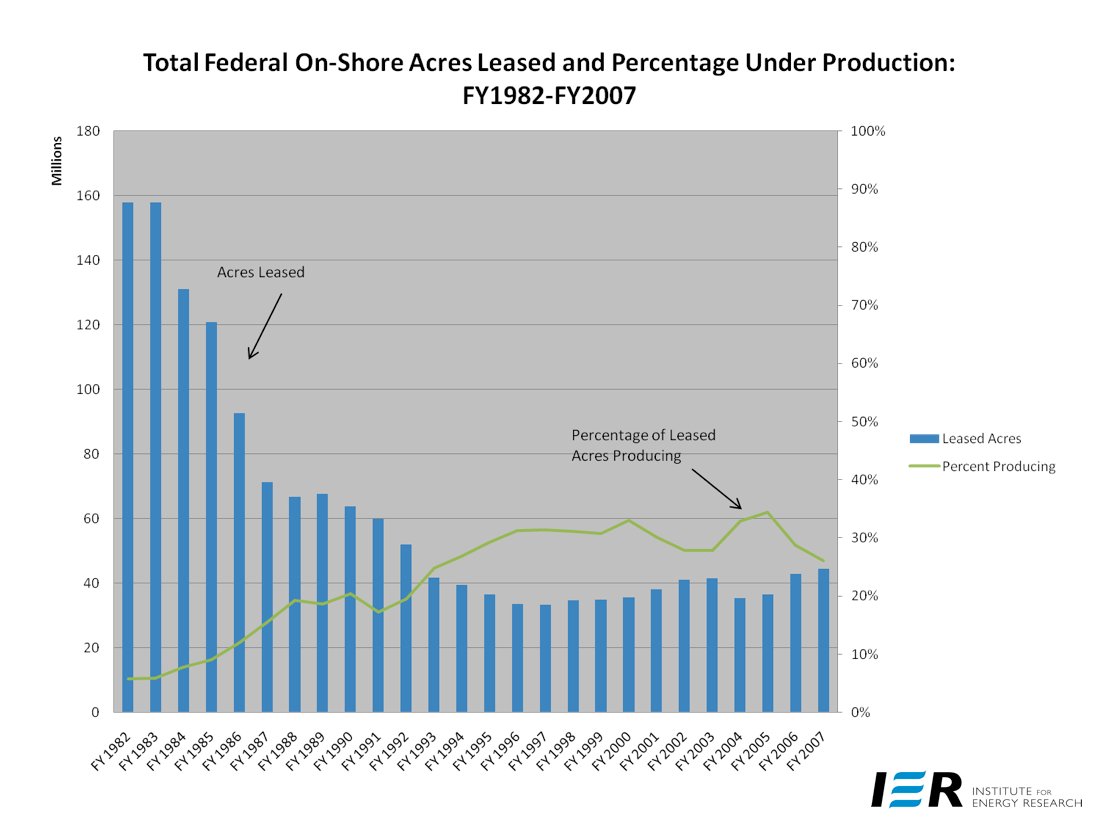 In fact technology has improved over time, allowing companies to increase their production on leased acreage. The chart at right demonstrates that oil companies are using more of their land, not stockpiling leases.

Getting Blood From a Turnip

After the offshore drilling moratorium was implemented in 1982 the Department of Interior could only issue leases for areas that had already been offered/leased before, or those areas with little or no economic energy potential. The exception was when Congress provided incentives to invest in Ultra Deep Waters in 1995 to stimulate production in areas that were previously too deep for our technology to reach.

As the charts above illustrate, interest in American energy leasing declined after the moratorium. It remains low for the same reasons. If Congress were to open new areas to production, leasing would increase and so would domestic supplies of energy. Until then, the U.S. will simply be continuing its attempt to squeeze blood from a turnip.

Can America "Extrapolate" Its Way to Energy Security?