On January 5, 2017, the Energy Information Administration (EIA) released its Annual Energy Outlook 2017, which provides annual forecasts of energy supply and demand.[i] This year’s outlook has projections through 2050—33 years into the future, though the agency’s documents describe the forecast only through 2040. Despite the Supreme Court placing a hold on the Clean Power Plan (CPP), the agency chose to include it in all of its forecast cases, except a case labelled the No Clean Power Plan Case.

Some of the reference case forecast highlights are:

Despite the additional renewable energy capacity, fossil fuels continue to provide the United States with the majority of its energy needs through 2040. Oil and natural gas supply 67 percent of U.S. energy needs in 2040, while coal supplies another 10 percent for a total fossil fuel contribution of 77 percent.

U.S. as a Net Exporter of Energy

According to the Energy Information Administration (EIA), natural gas exports are expected to surge and the trade balance of petroleum products is expected to improve making the United States a net energy exporter by 2026. It would be the first time the nation exported more energy than it imported since 1953. EIA also expects domestic energy production to rebound as energy prices improve and demand at home remains fairly flat.

The large increase in natural gas exports is due to pipeline exports to Mexico and shipments of liquefied natural gas (LNG) to foreign markets. In May, low-cost shale gas began moving via the Petroleos Mexicanos’s Los Ramones Phase II pipeline and is projected to boost U.S. gas deliveries to Mexico by 22 percent. A new LNG export terminal at Cheniere Energy’s Sabine Pass began shipping natural gas overseas in 2016. Additional LNG terminals are planned within the next several years, including the Cove Point facility in Lusby, Maryland, which will be converting Marcellus Shale gas to LNG for export. It is scheduled to open at the end of 2017. Over half of the U.S. LNG export capacity scheduled to be online by 2020 has been contracted to Asia as the expansion of the Panama Canal cuts travel time to the region.[ii]

The United States is expected to remain a slight net importer of oil and petroleum products through 2040. However, if technology keeps improving, the United States could become a net oil exporter before then. The current oil and natural gas renaissance is due to horizontal drilling used in conjunction with hydraulic fracturing–breaking shale rock by pumping water and sand into the rock to obtain the oil and gas. EIA believes the United States will remain a net exporter of coal though it does not expect U.S. coal exports to increase.[iii]

The primary driver for new electricity generation capacity is the premature retirement of fossil fuel units (primarily coal), largely due to the assumed implementation of the Clean Power Plan (CPP) and the near-term availability of renewable tax credits. Nuclear units are also retired due to assumptions that EIA is making about license renewals. Low natural gas prices, the renewable tax credits, and assumer lower costs for renewable capacity result in natural gas and renewable energy being the primary sources of new generation capacity. 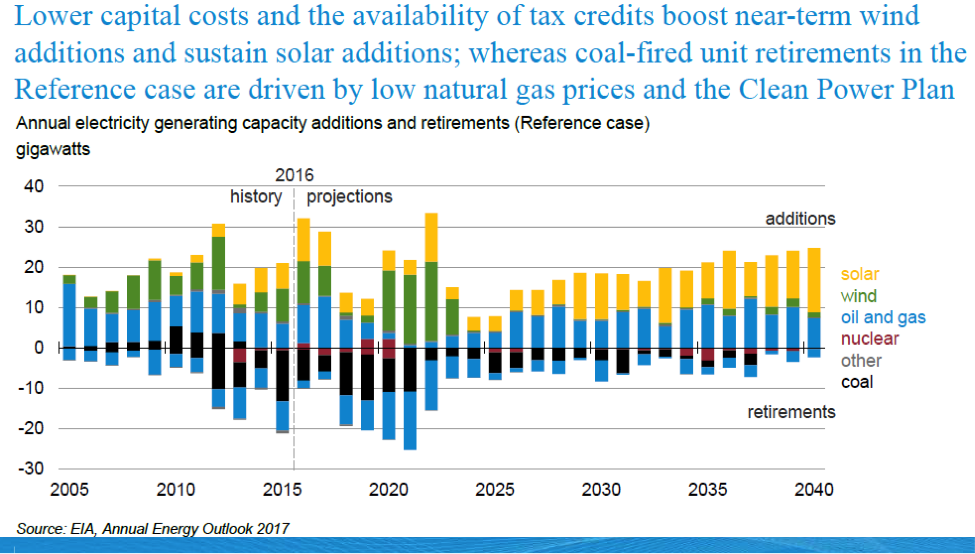 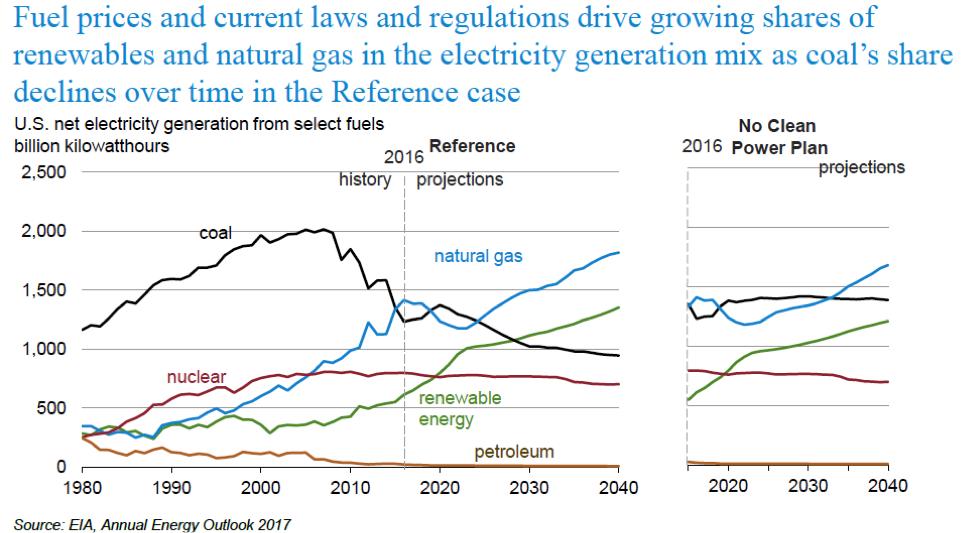 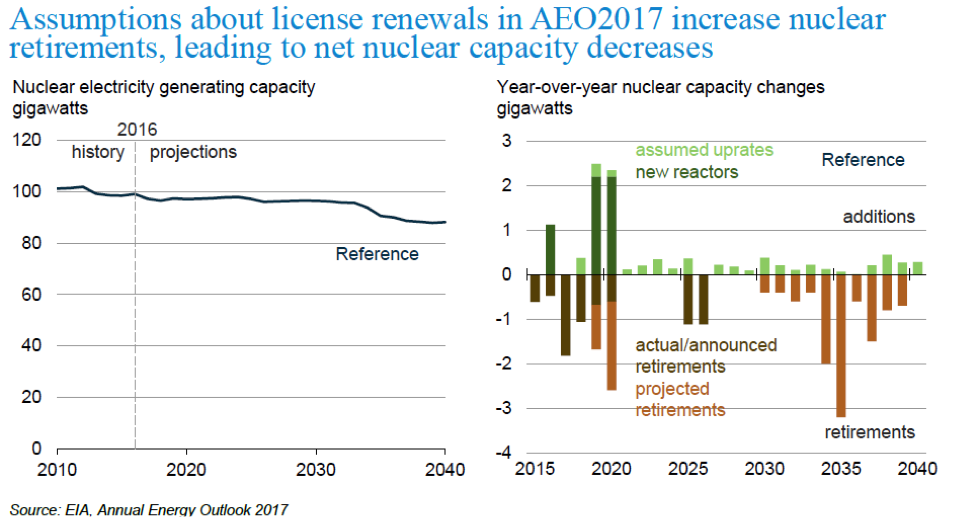 Energy-related carbon dioxide (CO2) emissions are expected to continue to decrease, but at a smaller rate than in the recent past. Between 2016 and 2040, reductions in CO2 emissions are expected to be 0.2 percent annually as compared to an average of 1.4 percent annually between 2005 and 2016.[iv] While electricity plants are expected to emit less carbon dioxide as they continue to switch from coal to natural gas and renewable energy, the EIA expects some of the decrease in carbon dioxide emissions from power plants to be made up by growth in the chemical industry. New plants are being built along the Gulf Coast that produce fertilizer and methanol, used to make plastics and other chemical products, increasing natural gas consumption.

Despite an increase in renewable energy in the generating sector, fossil fuels supply 77 percent of U.S. energy needs in 2040—slightly less than the 81 percent they supplied in 2015. The U.S. becomes a net energy exporter in 2026 as natural gas exports to Mexico and overseas surge. Coal units are prematurely retired due to the Clean Power Plan that has been stayed by the Supreme Court as it works its way through the lower courts where over half the states have filed suit. It is likely that the Trump Administration will quickly end the Clean Power Plan when President-Elect Trump takes office. The premature retirement of coal and nuclear plants makes room for additions of wind, solar, and natural gas units. Renewables’ share of U.S. energy needs in 2040 is 14 percent—slightly higher than its 10 percent share in 2015.

Explaining IER’s Position on the “Social Cost of Carbon”