Oil reserves in 2010 increased because sustained higher oil prices made it profitable to do more types of drilling and hydraulic fracturing technology provided access to oil trapped in shale formations (principally in North Dakota and Texas). Texas and North Dakota together accounted for almost 60 percent of the increase in oil reserves. Hydraulic fracturing technology also helped to boost natural gas reserves, allowing natural gas supplies locked in shale-rock formations to be accessed.[ii]

Proved reserves of natural gas began increasing moderately in the late 1990s and grew dramatically after the mid-2000s, along with intensified horizontal drilling programs. Recently, tight oil developments such as those in shale have contributed to the reversal of more than two decades of generally declining U.S. proved oil reserves.

Oil reserves at the end of 2010 were 25.2 billion barrels.  Proved reserves increased in each of the five largest crude oil and lease condensate areas–Texas, the Gulf of Mexico Federal Offshore, Alaska, California, and North Dakota. Texas had the largest increase, 860 million barrels (16 percent higher than reserves in 2009), primarily from ongoing development in the Permian and Western Gulf Basins in the western and south-central portions of the state. North Dakota reported the second largest increase, 829 million barrels (78 percent higher than in 2009), due to development activity in the Williston Basin (commonly referred to as “the Bakken.”) 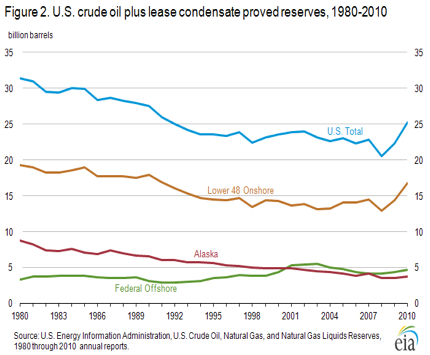 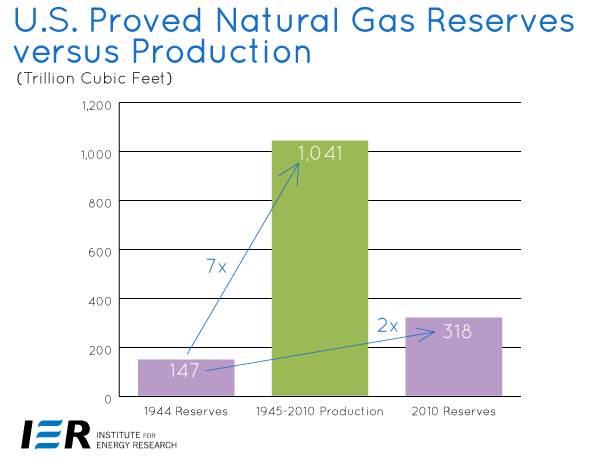 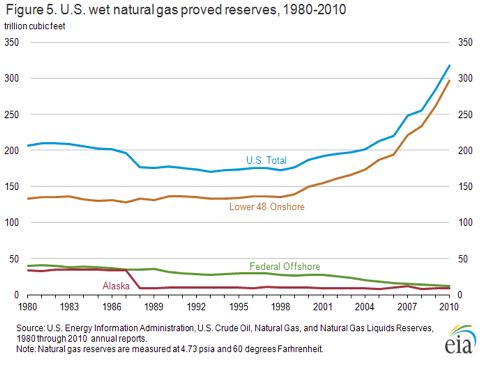 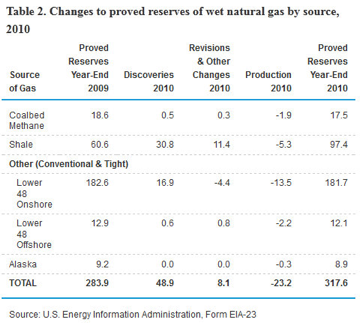 The significance of shale developments can be seen by calculating the share of shale gas relative to total U.S. natural gas proved reserves. The share has increased steadily, from less than 10 percent in 2007 to over 30 percent in 2010. 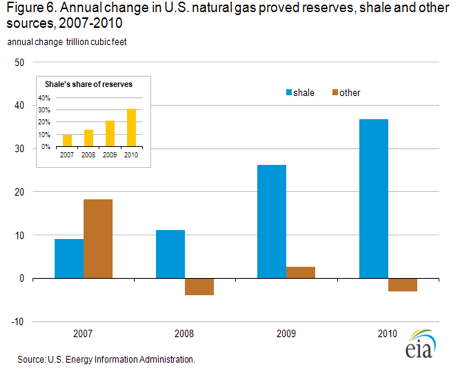 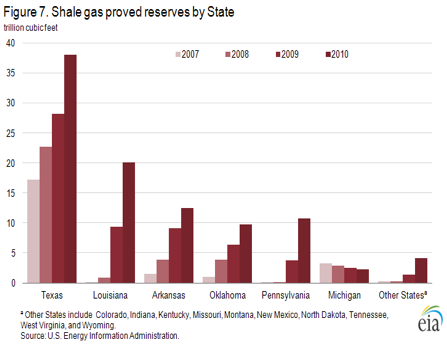 The United States has vast amounts of oil and gas resources, many of which are on federal lands owned by the U.S. taxpayer. Studies have shown that development of these resources along with importing oil and natural gas from our NAFTA partners can make us independent of overseas oil and gas within 15 years.[iv] Of course, access to the resources and a favorable leasing and permitting environment are needed. As these EIA reserve numbers show, the United States can increase its oil and gas reserves, and with it the jobs and economic growth that accompany more energy production.  As EIA Administrator Adam Sieminski said in testimony prepared for a House of Representatives hearing, “These reserves increases underscore the potential of a growing role for domestically produced hydrocarbons in meeting both current and projected U.S. energy demands.”