The Obama Administration is touting that our “dependence on foreign oil has gone down every year during the Obama Administration, including a reduction in net oil imports by ten percent—or one million barrels a day—in the last year alone.”[i]  While good news, this trend is happening not because of policies or actions taken by the Obama administration, but because of 1) a poor economy and high oil prices resulting in a lower demand for oil, 2) an increase in oil production on private and state lands (not federal lands) due to less bureaucratic red tape in leasing and permitting on private and state lands, and 3) an increase in biofuel (mainly ethanol) production due to the mandates from the Energy Independence and Security Act of 2007.

The increase in oil exports from Saudi Arabia to the United States began slowly last summer and has increased this year. Even though domestic oil production is increasing, the Obama administration is finding it difficult to lower its dependence on Persian Gulf oil, especially the heavy grades of crude oil that Saudi Arabia exports and that our refineries in the Gulf of Mexico use.  Some oil analysts indicate that this increasing dependency may only last a few years—until more Canadian and Gulf of Mexico production comes on line.  These are issues that have been caused by the Obama administration.  First, their moratorium and “permitorium” on offshore drilling after the Macondo accident resulted in 17 percent less oil production in offshore federal waters in fiscal year 2011 than the year before.  Then, their failure to permit the Keystone XL pipeline that would bring heavy crude oil from Canada postponed new supplies from our Northern Ally. 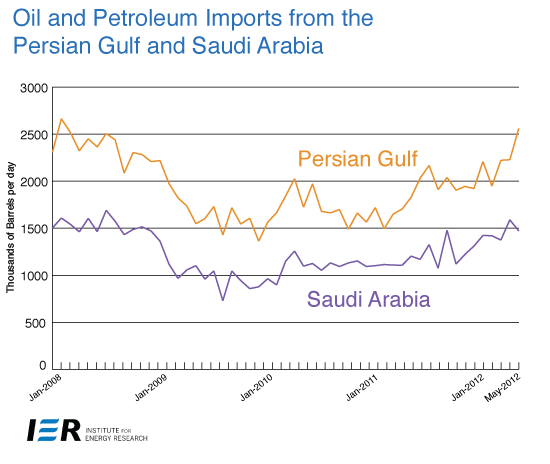 David L. Goldwyn, former State Department coordinator for international energy affairs in the Obama administration, stated “Until we have the ability to access more Canadian heavy oil through improved infrastructure, the vulnerability will remain.”[iii] But, the Obama Administration is not worried because it can tap into the Strategic Petroleum Reserve in the event of a self-defined crisis, it sees domestic oil production continuing to grow, and it believes Gulf area refineries can adjust their equipment to use sweeter crude oil if need be. Most of our new domestic production comes from shale oil fields in North Dakota and Texas that produce high-quality sweet grades of oil while refineries on the Gulf of Mexico coast are designed to refine the heavier oils that the United States traditionally imports from Canada, Mexico and Venezuela.

Refiners are importing more oil from the Persian Gulf to replace the declining production and imports from Mexico and Venezuela and the reduced production output from the Gulf of Mexico due to the moratorium and de facto moratorium on drilling. There is also insufficient pipeline capacity from Canada to replace those losses with Canadian crude, accentuating the need for the Keystone XL pipeline.

In recent years, U.S. oil imports have been declining due to increased domestic production on private and state lands, production of shale oil using hydraulic fracturing and horizontal drilling technology, increased production of corn-based ethanol and government mandates requiring its increased usage by refineries, and lower oil demand due to high oil prices and a poor economy.

Actions the Obama Administration Can Take

Approve the Keystone Pipeline.  Four years ago, TransCanada proposed the $7 billion Keystone XL pipeline to bring more oil from Canada to the United States. After years of study, the State Department has yet to decide whether or not to approve the pipeline. Because the pipeline crosses the U.S.-Canadian border, the State Department must decide whether the pipeline is in the “national interest.” Reducing our overseas imports of oil should be in our national interest as should be the pipeline’s economic benefits on both sides of the border. For example, its construction is expected create 20,000 jobs and states along the route are projected to receive an additional $5.2 billion in property tax revenue.  U.S. companies are invested in Canadian oil sands and many of our businesses supply goods and services for the oil sands projects in Canada.

Canada has 175 billion barrels of proved oil reserves that can be produced now and moved to U.S. refineries via the Keystone pipeline. If the pipeline had been approved when submitted, more oil could be flowing into this country in the very near future. Canadian oil is a secure oil supply, as Canada is our friend and ally, and largest trading partner.

And, as staggering as those numbers are, the truth is that unless we are allowed to look for energy, we will not know the full extent of our resources.

While the Obama Administration recently announced the “opening” of half of the National Petroleum Reserve in Alaska (NPR-A) to drilling, its plan leaves a broad area off limits to new oil development that had been set aside for the purpose of oil development in the 1920’s by President Warren Harding.[iv]  In a strange play on words, the Obama Administration in reality closed one-half of the National Petroleum Reserve – all of which was open – and then declared that it had “opened half.”

Continue with the Current Tax and Regulatory Structure. The Obama Administration wants to remove tax deductions that oil companies receive, many of which benefit the small independent oil and natural gas producers—not the big oil companies.  This simply results in the big oil companies going abroad to make their investments, and puts small producers out of business, while also reducing U.S. oil production and tax revenues.

The Administration has also proposed new regulations on hydraulic fracturing used to drill for shale oil and gas, which are currently being regulated by the states. There is fear among many in energy-producing states that the federal government is seeking to impose a federal regime on the production of shale oil and natural gas.

What Can Be Gained By the Above?

A recent study found that the U.S. could come close to producing enough new oil and natural gas to displace all non-North American imports within 15 years. The study, by energy consultants Wood Mackenzie, assumed oil drilling would be allowed off the currently prohibited areas of the East and West Coasts, in waters off Florida’s Gulf Coast, in Alaska’s Arctic National Wildlife Refuge, and on most federal public land that is not set aside where oil and gas or any commercial activities are generally excluded, such as in national parks and wilderness areas. It also assumed that permits would be granted to build pipelines to accommodate a doubling of Canadian oil production and the continuation of current tax rates for U.S. industry.[v]

The study found that if the oil industry was allowed access to the resources and the pipelines, domestic liquids production could reach 15.4 million barrels per day, close to the 19 million barrels a day that we currently consume, creating 1 million new jobs over the next seven years and 1.4 million by 2030. More than $800 billion in cumulative new government revenue could be generated by 2030 and $127 billion by 2020. Most importantly, no new taxes or increased government spending is needed to accomplish these results, just the opposite of the conditions the Obama Administration is promoting for green energy.

Oil imports from the Persian Gulf have increased significantly this year due to decreased oil production from the federal waters off the Gulf of Mexico, declining production of crude oil in Mexico and Venezuela, lack of pipelines to import more Canadian oil, and the configuration of Gulf Coast refineries to process heavy crude oils. The Obama Administration seems to be untroubled by this direction since it feels it can use the Strategic Petroleum Reserve in the event of a crisis. However, the Obama Administration can take positive steps now by approving the Keystone Pipeline, opening more federal lands to oil production, and creating an environment that promotes oil and gas drilling. Taking those steps, the United States could be almost independent of overseas oil within 15 years.

ICYMI: Daily Oklahoman says Washington should "get out of the way"