Due to Canada’s vast oil reserves, Canadian oil imports have also increased. They are at one of their highest levels ever, totaling 3.5 million barrels per day in October 2014—0.8 million barrels per day higher than our imports from OPEC–based on the most recent data from the U.S. Energy Information Administration (EIA). Clearly, if the United States continues to need oil imports–which forecasters expect–it is much better to import from our friendly northern neighbor than from overseas.

President Obama is apparently not seeing this trade-off, as he intends to veto any bill from Congress approving the northern route of the Keystone XL pipeline.[ii] If approved now, the Keystone Pipeline would be able to bring 830,000 barrels of oil a day from Canada to the United States in just a few years, when U.S. consumers will most likely see oil prices going up. EIA is expecting oil prices to average $71 a barrel in 2016, up from a forecast of $55 a barrel in 2015.[iii] 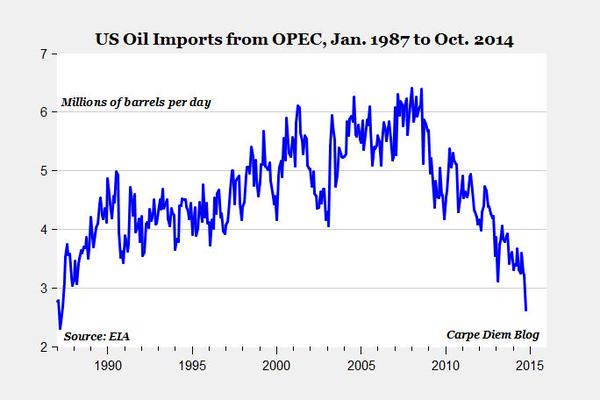 The U.S. shale oil explosion has resulted in a collapse in oil prices and, consequently, a huge decline in gasoline prices, which are now below $2 a gallon in some areas. That has put more money into consumers’ pocketbooks, aiding the U.S. economy.

U.S. net oil imports (imports minus exports) are now at their lowest level since 2005, and represent just 27 percent of U.S. petroleum demand—the lowest share since the mid-1980s.

Canada remains our largest non-domestic supplier of petroleum, providing 3.5 million barrels per day in October 2014 based on the latest data from EIA—0.8 million barrels a day more than OPEC. Canada has the oil reserves and the where-with-all to continue supplying oil to the United States, but infrastructure and political problems remain in the way.

President Obama has taken six years to determine that he cannot yet make a decision regarding the Keystone XL pipeline, which will be able to move 830,000 barrels of oil a day to the United States and further reduce our imports from overseas countries that are not always friendly to us. What’s more, President Obama has indicated that he will veto any bill that Congress sends to him approving the Keystone pipeline, despite all hurdles to its construction being removed. Last week, the Nebraska Supreme Court voted to allow the Governor’s decision to approve the proposed pipeline route through the state.

President Obama’s environmental issues with Canadian oil sands do not substantiate his numerous delays in making a decision on the Keystone Pipeline. Even if the pipeline is never built, Canada’s oil will still be produced and sold. Despite the 60-percent drop in oil prices, oil sands production has continued in Canada and production is expected to increase by 6 or 7 percent this year. Canadian oil sands are getting to market by existing pipelines, rail and ship, and Canada is considering new pipelines that would transport the oil to Canada’s east and west coasts.[v]

Hydraulic fracturing and U.S. oil production have reduced our need for oil imports. Oil imports from OPEC have dropped by almost 60 percent. Our net oil imports are now at just 27 percent of our petroleum demand. Due to American ingenuity, the United States has become more energy secure. Increasing our oil imports from Canada and decreasing them from overseas is another way for the United States to become even more energy secure. However, the President has indicated that he will veto any bill that Congress passes approving the Keystone XL Pipeline, despite pipelines being the safest means of moving oil. President Obama’s veto, were it to occur, would simply mean that the President is against making the United States less dependent on overseas oil.

Time to Turn the Page on Obama's Reckless Climate Agenda