In 2012, President Obama declared that “the problem is we use more than 20 percent of the world’s oil and we only have 2 percent of the world’s proven oil reserves.” And he also said, “Even if we drilled every square inch of this country right now, we’d still have to rely disproportionately on other countries for their oil.”[i]

According to the Energy Information Administration (EIA), U.S. oil production continues a steady upward climb despite lower oil prices and the president’s declarations just 2 short years ago. Increased domestic oil production has benefited this nation by increasing employment, increasing revenues of state and local governments, lowering oil imports, and reducing the trade deficit. This oil production renaissance is the result of hydraulic fracturing and directional drilling technology that has made it profitable to produce oil from shale formations. As oil prices have fallen, the question being asked by many is: “At what price does shale oil become uneconomic to produce?” Some believe it begins at $80 a barrel; others see it hitting as low as $50 per barrel. What is clear is that it depends on the shale formation and the difficulty of capturing oil from it. Therefore, a range of prices between $50 and $80 a barrel should not be surprising.

Domestic oil production increased by 71 percent between 2008 and July 2014–the latest data from EIA show it to be 14 percent higher in July 2014 than just one year earlier. This oil production renaissance is due to hydraulic fracturing and directional drilling technology applied to shale formations, and has made Texas and North Dakota the two largest oil producing states, supplying almost 50 percent of the nation’s oil. Oil production from North Dakota’s Bakken formation approached 1.1 million barrels a day as of August, compared with about 380,000 barrels per day three years earlier.[ii] 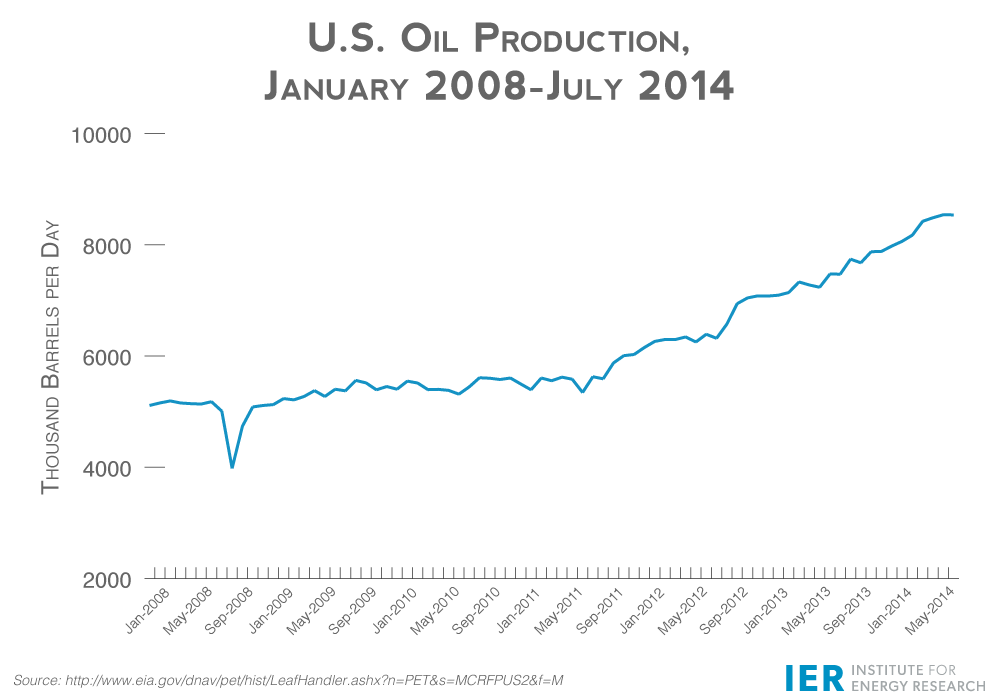 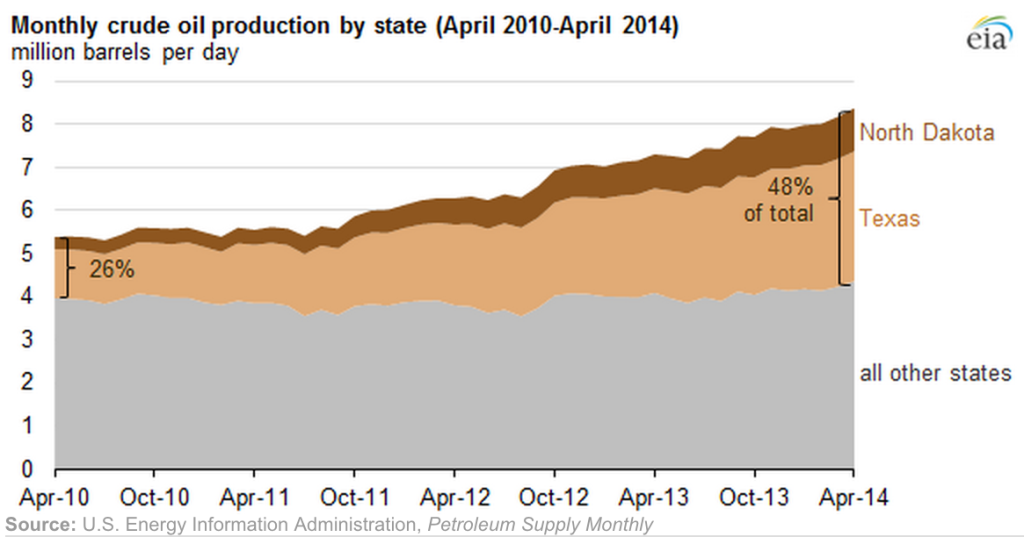 Clearly, the shale oil boom is the reason for oil’s renaissance in the United States. But, many question its longevity citing high decline rates in well productivity and the more costly extraction techniques needed to produce the oil, particularly in the light of declining oil prices. However, oil producers are continually improving drilling efficiency through the use of new recovery techniques. For example, horizontal drilling combined with an increasing number of hydraulic fracturing stages have enhanced production rates in shale formations.[vi]

The U.S. oil renaissance has helped to increase the supply of oil worldwide due to the nation’s lower import volumes. U.S. net oil imports dropped from 60 percent of U.S. oil consumption in 2005 to 33 percent in 2013. That percentage has declined further to 28 percent at the end of September 2014. And, forecasters believe that the percentage will decline to the low twenties as U.S. oil production continues to grow. The lower net export number is partly the result of increased exports of petroleum now totaling 4 million barrels per day, consisting mostly of petroleum products that do not have a limit on their export level. Net petroleum exports have increased by a factor of 3.4 compared to 2005 levels.

Since the mid-1970s, the United States has run a deficit in merchandise trade, i.e. payments for imports have exceeded receipts for exports. This deficit on the merchandise trade balance reached a maximum of $883 billion in the second quarter of 2008. Crude oil and petroleum products have played a significant role in the balance of U.S. trade accounts. Since 2009, exports of petroleum and petroleum products have reduced the trade deficit. The chart below shows the effects of petroleum imports and exports on the trade deficit.[vii] 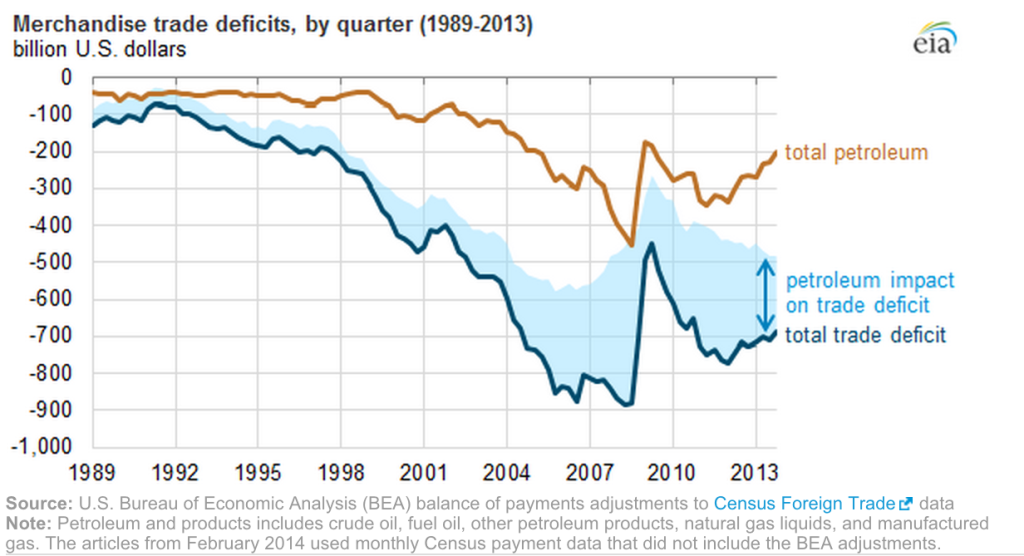 Stagnation in world economies has produced a slack in world oil demand and a supply glut in global oil markets has resulted in a drop in world oil prices of around 25 percent since June. This is largely due to global oil markets adjusting to surging production in the United States and to slower growth in China’s economy that has impacted its demand for oil.[viii]

Normally, the Organization for Petroleum Exporting Countries (OPEC) would cut production to keep prices high rather than let them dip to below the breakeven point where oil exporting countries can balance their national budgets. (See chart below.) However, Saudi Arabia, OPEC’s swing producer, has decided that it wants to maintain market share and therefore has not supported an oil production cut-back. Saudi Arabia produces about a third of OPEC’s oil—about 9.7 million barrels per day. Some believe that the Saudis are agreeing to lower oil prices now to curb new investment and further increases in global supply—particularly from U.S. shale formations and Canadian oil sands–thereby gaining higher revenue in the medium term.[ix] OPEC next meets on November 27, 2014, and will discuss oil production and price issues among its member countries. 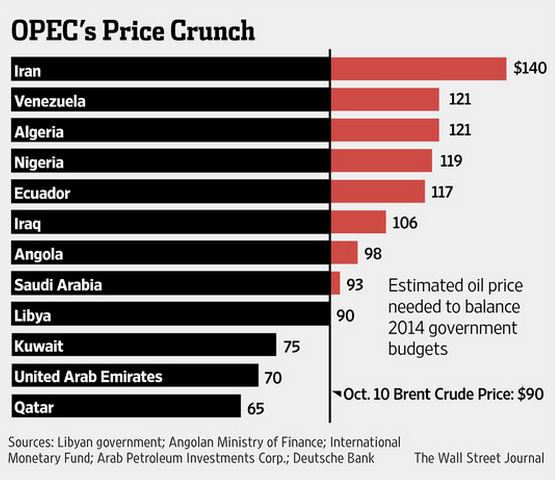 The Economics of Shale Oil

Will the Saudi strategy work? The question, of course, is at what price does shale oil production in the United States remain economic? According to Daniel Yergin, vice chairman of IHS CERA, oil prices in the United States at $75 to $80 a barrel will be sufficient to maintain “a pretty high momentum” of shale oil and gas production.[x] According to the International Energy Agency, only about 4 percent of U.S. shale oil projects have breakeven prices of more than $80 a barrel.[xi] And, about 98 percent of crude oil and condensates in the United States have a breakeven price of below $80 and 82 percent have a breakeven price of $60 or lower.[xii] According to Matthew Jurecky, head of oil and gas research for the London-based research company GlobalData Ltd., “The profit margin on most commercial unconventional oil plays will support prices as low as $50, many below that even.”[xiii]

Clearly, shale oil production is profitable at today’s lower world oil prices since U.S. prices were averaging around $85 to $90 a barrel through its boom, despite the world oil price measured by Brent crude being well over $100 a barrel. U.S. oil prices were lower than world oil prices due to the lack of storage and pipeline capacity to move it to processing centers. Yet in the past five years, more than $500 billion of private investment went into hydrocarbon infrastructure.[xiv]

As mentioned above, shale oil production is getting more efficient, which means that shale oil producers can accept a lower price and still make a profit. Drilling techniques today, including horizontal drilling, hydraulic fracturing and information technologies that accurately locate where to place rigs, are far more productive than when the shale oil boom started. According to the Energy Information Administration, the quantity of shale or natural gas produced per rig has increased by more than 300 percent over the past four years.

Further, the U.S.’s hydrocarbon infrastructure is enormous and diverse. As mentioned above, the United States has many world-class fields that are increasing production at double digit rates. If and when profit margins erode due to low oil prices, American entrepreneurship will most likely produce new shale oil production techniques.

For example, U.S. shale oil producers are putting more wells into the most productive areas of their oilfields to help keep the drilling boom going amidst lower prices. This technique, known as downspacing, produces more oil at less cost from each field, which will allow oil companies to increase profit and to invest in further drilling. Producers, however, need to ensure that crowded wells do not rob crude oil from each other without raising total production to make the extra drilling worthwhile.[xv]

Slow oil demand growth from stagnating economies; an oil supply glut, primarily from U.S. shale oil production; a slowing in China’s economic expansion; and continued OPEC production without cut-backs has resulted in a world oil price decline of around 25 percent. Some believe that the Saudis want to accept a lower oil price and to maintain market share in order to limit further oil shale development in the United States and oil sands expansion in Canada. Nevertheless, U.S. oil production keeps increasing despite lower oil prices. And the United States and North America have plenty of energy despite what President Obama told us. U.S. entrepreneurship most likely will continue to produce efficiency improvements in shale oil drilling so that oil producers can make a profit and continue the shale oil renaissance.