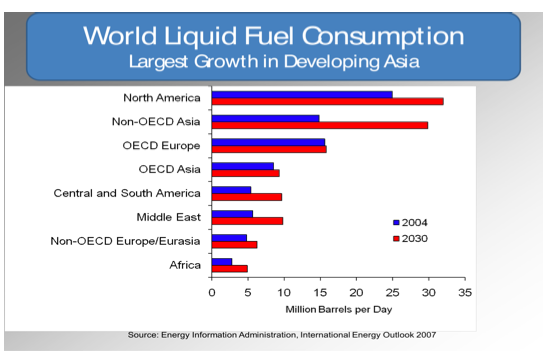 The answer is not the United States, as one might think.

Consumption of liquid fuels (both petroleum and bio) is forecast to increase by more than 40 percent from 2004 to 2030. Leading the increase will be Asian countries such as China and India, which are not members of the Organization of Economic Cooperation and Development (OECD). These non-OECD Asian nations are expected to nearly double their consumption, requiring an additional 15 million barrels a day. The North American countries of the United States, Mexico, and Canada, are expected to increase consumption almost 30 percent, or 7 million barrels a day.

The forecast envisions 2.7 percent annual growth in liquids consumption through the year 2030 in the non-OECD Asian countries. This forecast reflects anticipated robust economic growth, burgeoning industrial activity, and rapidly expanding transportation use. Indeed, transportation use generally accounts for two-thirds of the expected increase in consumption, followed by a 27 percent increase for the industrial sector, mostly for chemical and petrochemical processes.

Liquids consumption growth in China is forecast to be the highest among the non-OECD Asian countries, averaging 3.5 percent per year from 2004 to 2030. China’s growing consumption is followed by India’s liquids demand, which is forecast to grow 2.2 percent per year. In the rest of the world, Central and South America are expected to increase consumption of liquid fuels by 2.3 percent annually through 2030, Africa by 2.2 percent, the Middle East by 2.1 percent, and non-OECD Europe and Eurasia by 2.1 percent. North American growth is expected to average 1 percent a year. Only OECD Europe and OECD Asia are expected to have little growth in demand, mostly because of slow or declining population growth or because of lower economic growth.