“Motorists are paying more for gasoline at this time of year than they’ve ever paid,” according to AAA spokesman Michael Green

As of February 20, 2013, gasoline prices in the United States are averaging $3.78, 14 percent higher than a month ago and are the highest on record for this time of the year. The purpose of this post is to explain why this increase is occurring. 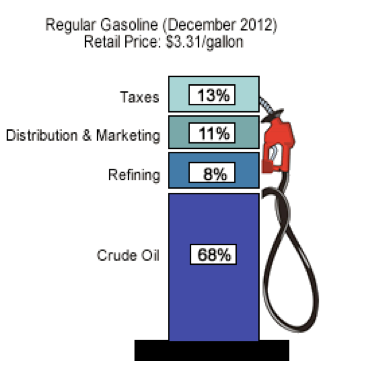 is followed by taxes that represent 13 percent of the price, distribution and marketing costs at 11 percent, and refining costs at 8 percent. The cost distribution varies with seasonal changes as refineries retool to switch from winter grade to summer grade gasoline, perform regular maintenance on their facilities, and fix any break-down of equipment.

Currently, several refineries are down for maintenance or equipment failure that is a result of normal operations. With limited refinery capacity in the United States, the removal of some refineries from the production of gasoline results in higher prices. Along with these refinery outages and associated gasoline price increases are higher prices for oil on world markets due to increasing world demand, production quotas by OPEC countries, an embargo on Iranian crude as a result of sanctions by the United States and the European Union to make Iran abandon nuclear weapons development and the dollar’s continuing devaluation.[1]  The result is the gasoline price increases we have seen over the past several weeks.

Lowering world oil demand or increasing world oil supplies would lower oil prices, but the United States can neither affect the oil demand of other countries nor can it increase the supply of oil from other oil producing countries.  Besides reducing oil demand or increasing oil supply, U.S. gasoline prices can be lowered by lowering refining costs, decreasing gasoline taxes, or decreasing marketing and distribution costs, but as the figure above shows, these components of the cost of gasoline are small compared to the price of oil.

a)     World Oil Demand Growth:  World crude oil and liquid fuels consumption grew to the highest level ever in 2012, with an estimated 89.2 million barrels per day (bpd) consumed in total.[2] The Energy Information Administration (EIA) projects that total world oil consumption will grow by 1.05 million bpd during 2013 and 1.4 million bpd in 2014 with countries outside the Organization for Economic Cooperation and Development (OECD) comprising most of the growth in consumption.[3] The largest increases in oil consumption will be non-OECD Asian countries, which are using increasing amounts of oil to pursue rapid economic growth.  By comparison, U.S. liquid fuels consumption has declined since 2010.

China, in particular, has a large role in the increased global demand for oil. China likely consumed nearly half of the global 2 million barrel per day increase in world oil consumption since 2010.[4] According to the Energy Information Administration, China increased its petroleum consumption by almost 500,000 barrels per day in 2011, and preliminary estimates are that China added another 420,000 barrels to its daily consumption in 2012. China is the second-largest consumer of oil behind the United States and as of 2009, China became the second-largest net importer of oil. In 2011, Chinese crude oil imports were 5.52 million bpd[5]—up 8.2 percent from 2010 levels.

If world demand for oil rises faster than oil companies can produce the crude, oil prices will go up, which is what is occurring now.

b)     Domestic Supply: According to the EIA, the U.S. produced 6.4 million bpd of crude oil in 2012,[6] up from 5.6 million bpd in 2011—the largest one year increase since the first oil well was drilled before the Civil War.   The EIA expects production from the Federal Gulf of Mexico (GOM)—which produced 28 percent of U.S. oil in 2010—to produce only 19 percent of U.S. oil production in 2013.[7] There are two reasons for this. First, hydraulic fracturing on private and state lands is rapidly increasing total domestic oil production. According to the Congressional Research Service, 96 percent of the increase in domestic oil production since 2007 has come from non-government lands.  Second, oil production in the Gulf of Mexico is predicted to fall by 10 percent from production levels in 2010 mainly due to government policies that restricted drilling in the Gulf.[8] Only 2 percent of offshore federal lands and 6 percent of onshore federal lands are leased to oil and gas drilling and permits for drilling in those areas where it is allowed have fallen dramatically. More domestic oil could be produced if the federal government permitted it and if their regulatory procedures were commensurate with state regulation that is more conducive to exploration and drilling.

c)     OPEC Production Restraints:   About 23 percent of our oil product supply in 2012 arrived from the twelve OPEC countries:[9] Algeria, Angola, Ecuador, Iran, Iraq, Kuwait, Libya, Nigeria, Qatar, Saudi Arabia, United Arab Emirates, and Venezuela. These twelve oil-exporting nations possess much of the world’s known conventional oil reserves, and as such, have excess production capacity. However, in order to maintain favorably high oil prices to fund their governments, these nations agree on production targets that curtail the supply of oil from member states.   For instance, in December 2008, the 11 members bound by quota restrictions, all but Iraqagreed to a 4.2 million bpd production cut to keep oil prices high. In December 2012, OPEC agreed to cut production by 465,000 bpd to maintain high oil prices.[10]

In addition, oil prices are buoyed due to unrest in the Middle East and the boycott of Iranian oil[11] in an attempt to make Iran abandon development of nuclear weapons. Recently, Iran agreed on “some points” in talks with U.N. experts. If an agreement is reached and sanctions are removed, the $10-$15 per barrel risk premium could lower oil prices very quickly.[12]

The mere potential of an outbreak of a major war in the Middle East keeps oil prices artificially high, as oil traders factor in the chance of a major disruption in exports from the region. Along with growing demand from China, lower oil production from Saudi Arabia and potential and real supply disruptions in Venezuela, Nigeria, North Africa and the Middle East have put markets on edge.[13]

d)     Expansionary U.S. Monetary Policy: Since 2009, commodity prices (like food and fuel) have risen with   Federal Reserve interest rate cuts and the various rounds of “quantitative easing.” This increase is precipitated by investors choosing to secure their finances with non-income generating real assets, like oil and precious metals, in the face of inflation and the threat of a devalued dollar. In particular, oil prices surged along with other commodity prices when the Federal Reserve Board revved up its second burst of quantitative easing in 2010-2011 and stabilized when QE2 ended.

In recent months, the Federal Reserve Board has again signaled its commitment to near-zero interest rates first through 2013, and then through 2014. Oil and other commodity prices have begun another surge and hedge funds are again betting on commodity plays.

Canada, our neighbor and ally to the North, has the third largest reserves of oil in the world at 175 billion barrels. It currently sells us almost 3 million barrels per day and could easily sell us more if the transportation infrastructure were in place to move it to U.S. refineries. However, with the federal government stalling on the Keystone pipeline, more expensive forms of transportation are moving some of this oil to U.S. markets, such as rail. Because Canadian crude is currently land-locked, its price is low, about half that of Brent crude, making more expensive rail transportation economic.

U.S. crude oil that is land-locked in North Dakota and at Cushing, Oklahoma storage terminals also is lower priced than foreign overseas oil. Ships could be used to move this lower priced oil to East Coast markets where overseas oil is used if the 1920 Jones Act were repealed. The Jones Act requires that shipments from one U.S. port to another be carried on vessels built in the United States, owned by U.S. citizens, and operated by a U.S. crew. [15]

The second main cost of the price of gasoline is federal and state taxes. In December 2012, federal, state and local taxes accounted for 13 percent of the price of gasoline.[16] The federal tax on gasoline accounts for 18.4 cents per gallon, while the volume-weighted average state and local tax is 30.4 cents per gallon as of January 2013. This amounts to a 48.8 cent nationwide average tax on gasoline.[17]

The third cost to factor into the price of gasoline is the refining process, where crude oil is “cracked” and formulated into its chemical components and made into gasoline. In December 2012, refinery costs comprised 8 percent of the retail price of gasoline.[18] This figure varies regionally because different parts of the country require different additives and processing steps in their gasoline formulations. The figure of 8 percent would also vary in other months, owing to seasonal changes in refinery operations. For example, in the spring when refineries need to retool to produce summer-blend gasoline and to meet summer gasoline demands, the cost of refinery operations is higher.

Currently, gasoline production is at a low because plants like Chevron’s El Segundo refinery near Los Angeles and LyondelBassell Industries NV’s Houston site in Texas are offline, undergoing routine maintenance[19], which points to the lack of excess refining capacity in this country.  Since the 1990s, 66 U.S. refineries have been shuttered due mainly to increasing regulatory costs. Since 1990, refineries have spent $128 billion to comply with federal environmental regulation.

The last component of the price of gasoline is the retail dealer’s costs and profits, which constituted a combined 11 percent of the cost of a gallon of gasoline in December 2012.[20] From the refinery, most gasoline is shipped first by pipeline to terminals near consuming areas and then loaded into trucks for delivery to individual stations. Ethanol must also be transported by truck or train since it cannot be transported by most pipelines prior to delivery.

The price at the pump reflects both the retailer’s purchase cost for the product and the other costs of operating the service station. It also reflects local market conditions and factors, such as the desirability of the location and the marketing strategy of the owner.

Gasoline prices are high and increasing because world oil demand growth is outpacing oil supply output, thereby increasing oil prices and gasoline prices. This is despite increasing U.S. production and decreasing U.S. consumption. Further exasperating world markets are the sanctions on Iran and unrest in other oil producing regions that have traders adding a risk premium to oil prices. Gasoline prices are further being boosted because of lack of refining capacity to compensate for outages due to equipment failure and routine maintenance, keeping supplies of gasoline low. Environmental regulations on refineries have shuttered plants over the last several decades and new regulations will be increasing the cost of refining crude which will be passed onto consumers of oil products in the future.

[1] Forbes, The Weak Dollar Is Getting Caught in a Currency War Pincer, February 19, 2013, http://www.forbes.com/sites/briandomitrovic/2013/02/19/the-weak-dollar-is-getting-caught-in-a-currency-war-pincer/

[14] On a gross basis 60 percent of U.S. oil demand is imported from foreign countries. There is a difference between the gross and net imports because the U.S. exports some oil and refined products.