Economist Paul Krugman has been running victory laps for years, claiming that fiscal conservatives made erroneous predictions about inflation and therefore should stop pontificating on economic policy. (I had the pleasure of being personally singled out by Krugman on this account.) To hear Krugman’s version of history, he and his allies have been “right about everything” (an actual quote) while his adversaries have been “wrong about everything” (again, an actual quote).

In this context, I was amused when I recently stumbled upon a Krugman column from 2008, in which he confidently predicted that oil—then trading at $137 a barrel—was on a permanently higher trajectory. Americans, Krugman told us, should get used to expensive oil, because “nothing” (his term) would bring back cheap oil. That prediction totally blew up in Krugman’s face; the price of oil collapsed mere months after his proclamation, and in the decade since hasn’t come close to the prices of summer 2008.

This isn’t mere mockery of a botched prediction. Krugman not only failed to see the coming financial crisis and Great Recession, but he also failed to see the impending surge in U.S. crude oil output. Per Krugman’s own standards, then, he should stop lecturing us on energy markets.

Remember that in the early summer of 2008, oil prices were on a tear. Certain people were calling for a crackdown on speculators, blaming them for the high prices.

In this context, Krugman wrote in a June 27, 2008 article that he did not think speculators were to blame. (I agreed with Krugman on that account.) For one thing, we didn’t see the “signature” of accumulating physical inventory that would go hand-in-hand with a speculation-driven price hike. But more generally, Krugman argued that it was basic supply and demand driving the price of oil.

So far, so good. Yet Krugman went on to say:

Regulating futures markets more tightly isn’t a bad idea, but it won’t bring back the days of cheap oil. Nothing will. Oil prices will fluctuate in the coming years — I wouldn’t be surprised if they slip for a while as consumers drive less, switch to more fuel-efficient cars, and so on — but the long-term trend is surely up.

Most of the adjustment to higher oil prices will take place through private initiative, but the government can help the private sector in a variety of ways, such as helping develop alternative-energy technologies and new methods of conservation and expanding the availability of public transit. [Krugman 2008, bold added.]

As usual, Krugman is able to lasso his positive views on economics in service to his normative policy prescriptions, namely for the government to encourage wind and solar. Notice the one strategy Krugman fails to mention is the federal government allowing for greater development of oil and natural gas held on federal land.

How Did Krugman’s Prediction Fare?

So how did things turn out? Was Krugman right that the price of oil in June of 2008 was the new normal, and in fact prices were “surely” headed higher? 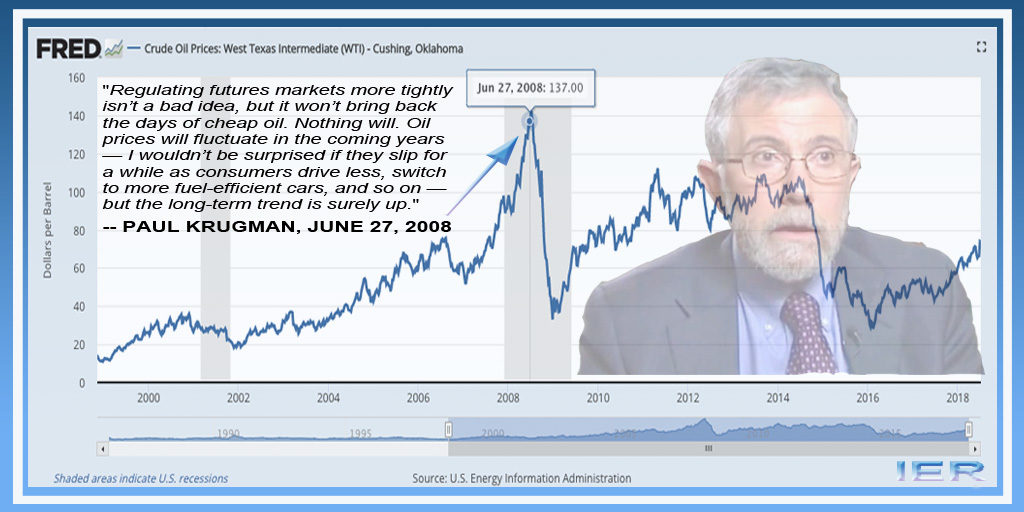 Now defenders of Krugman might say that the collapse was due to the financial crisis and Great Recession. OK, but even then, it is a strike against Krugman for not seeing that calamity coming, a mere three months before it hit. (To toot my own horn, I was warning a year before the crisis that we might be in store for the worst recession in 25 years.) After all, Krugman has not been shy since the fall of 2008 in pontificating on the correct policies to deal with the macroeconomy.

Yet the fall in oil prices isn’t merely about a collapse in demand. As I discussed for IER back in those days, the sharp turnaround in oil prices occurred when George W. Bush removed the Executive moratorium on offshore oil drilling in the summer of 2008 (shortly after Krugman’s column, in fact). Indeed, the price of oil fell $9 during Bush’s press conference.

In any event, world oil output (and consumption) is far higher now than when Krugman wrote. According to BP’s statistics, world consumption of crude oil averaged 86.5 million barrels/day in 2008. Yes, it fell somewhat in 2009 (because of the Great Recession), but by 2010 it hit new highs. In 2017, world consumption had climbed to 98.2 million barrels/day, about 14 percent higher than when Krugman wrote. And yet, despite this increase in consumption, the price of oil in 2017 was in the $50s per barrel, less than half the price when Krugman assured us the days of cheap oil were gone. (Note that currently, oil is trading in the $70s, but the BP consumption data referred to the annual average for 2017.)

The Surge in U.S. Output

People talk about the “fracking boom” but I think many Americans don’t realize just how amazing the surge in U.S. crude output has been:

Thus we see just how catastrophically wrong the energy pessimists have been. U.S. field production of crude has almost doubled in the last decade. Look at what Krugman wrote in April 2008 on this general theme:

OK, Athabasca tar sands have finally become a significant oil source, but even there it’s much more expensive — and environmentally destructive — than anyone seemed to envision in the early 70s.

You might say that this is my answer to those who cheerfully assert that human ingenuity and technological progress will solve all our problems. For the last 35 years, progress on energy technologies has consistently fallen below expectations. [Krugman April 2008, bold added.]

And so we see Krugman’s botched oil price prediction flowed out of his utterly wrong view on production possibilities.

Krugman was totally wrong on oil prices and the potential of oil output back in 2008. (He has been wrong about lots of other things, too.) Oil output, particularly in the U.S., is much higher now than Krugman thought possible, a decade ago. His warnings that we needed to switch to renewable energies were thus also wrong; oil is far cheaper today than it was in the summer of 2008, even though Krugman predicted the opposite.

On Krugman’s own grounds, therefore, he should stop pontificating on energy markets and policy. Krugman should defer to the scholars associated with IER and other free-market outlets, which have correctly told Americans that we have an abundance of fossil fuel energy if only governments would get out of the way.

The Population Bomb That Was A Dud