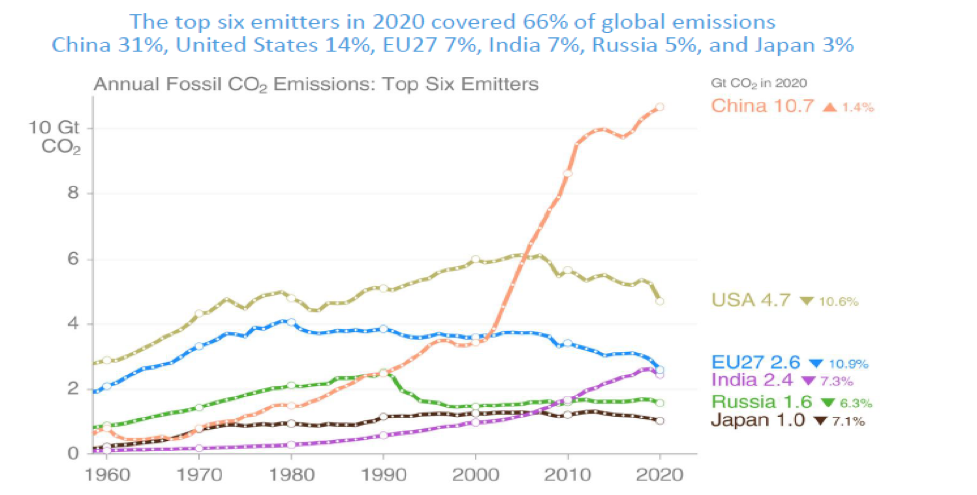 China’s carbon dioxide emissions come principally from coal, which is used extensively for electric generation and in industrial processes in China. China’s increased demand for electricity could bring development of up to 150 gigawatts of new generation coal capacity by year-end 2025, putting China’s known coal-fired generation capacity at 1,230 gigawatts—about 6 times the U.S. coal-fired generating capacity. China already accounts for over half of all global coal-fired electricity output. Coal consumption is expected to produce over 70 percent of China’s carbon dioxide emissions in 2021 (a growth rate of 2.5 percent from 2020), followed by oil consumption at a distant 16 percent. Coal consumption also is expected to produce over 70 percent of the carbon dioxide emissions in India, with oil consumption also coming in at a distant second.

The United States reduction in carbon dioxide emissions is exemplary because it has occurred without a carbon policy such as a cap and trade program or a carbon tax, unlike the European Union, which implemented a cap and trade program in 2005. The carbon price in the European Union has recently increased substantially to €96.28 per metric ton ($109.91 per metric ton). The EU Emissions Trading Scheme (ETS) is the world’s largest greenhouse gas trading program. By 2019, the system covered more than 15,000 factories, power stations and other installations in 31 countries, including EU members, the United Kingdom, Iceland, Norway and Liechtenstein. 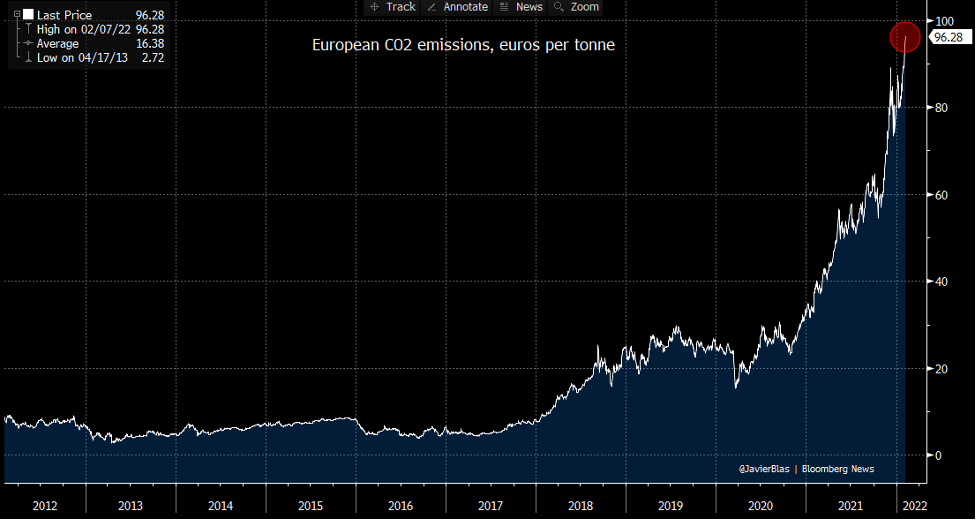 China is by far the largest emitter of carbon dioxide emissions in the world. Despite China’s commitment to the Paris Climate Accord, China’s Xi Jinping recently indicated that the country’s low-carbon goals should not come at the expense of energy and food security or the “normal life” of ordinary people. China sees pledges to reduce carbon dioxide emissions as a risk to jobs and economic growth, which they have prioritized. Xi was quoted as saying, “Reducing emissions is not about reducing productivity, and it is not about not emitting at all, either.” Xi also said, “We must stick to the overall planning and ensure energy security, industrial supply chain security and food security at the same time as cutting carbon emissions.” These are words that the Biden administration needs to consider, as its anti-oil and gas policies are rapidly escalating gasoline and heating costs for millions of Americans that can least afford those increases and his anti-coal stance is eliminating a possible avenue for lowering electricity prices as coal plants retire in the United States.