President Obama and our newly elected Congress should look at the most populated country in the world for lessons on how to grow an economy by using energy. Predictions by the Conference Board, a highly respected organization of economists, have China’s economy exceeding that of the United States within two short years. The International Energy Agency of the Organization for Cooperation and Development predicts that China’s energy consumption will grow by 75 percent in the next quarter century, fueling its economic growth. China plans to construct new clean technologies, including nuclear, hydropower, wind, and solar, but not to the exclusion of fossil fuels — particularly coal — where it is the world’s largest producer and consumer. It has made business partnerships around the world for oil resources and has just made one with France for nuclear development to support future needs in areas where it is low in resources. 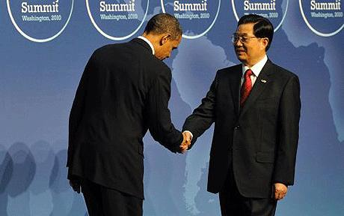 According to the Conference Board, China’s economy is expected to overtake the U.S. economy by 2012,[i] making it the largest economy in the world in just 2 short years. This is an event of historic proportions. The Conference Board is a non-advocacy, non-profit organization whose mission is to “provide the world’s leading organizations with the practical knowledge they need to improve their performance and better serve society”.[ii] Buoyed up by China’s phenomenal growth rate, the economists at the Conference Board are predicting that the global economy will grow faster in the next decade, averaging 4.4 percent between 2010 and 2020, compared to 3.7 percent between 2000 and 2010.[iii] Advanced economies are predicted to account for less than 1 percentage point of global growth from 2010 to 2020, while the remaining 3.4 percentage points are expected to come from emerging economies. Thus, growth in emerging and developing economies will be more than three times faster than growth in advanced economies over the next ten years.

The Conference Board measures Gross Domestic Product in terms of purchasing power parity, where the purchasing power of different currencies is equalized for a given set of products.[iv] Exchange rates between currencies are dealt with by finding goods available for purchase in both currencies and comparing the total cost for those goods in each currency. In purchasing power parity terms, China is projected to represent 24.1 percent of world output by 2020, while the United States is expected to represent only 14.8 percent.[v] This is an historic shift in fortunes, reversing a century of US dominance as the world’s largest economic power.

But one’s economy does not grow without the support of energy—lots of energy. The International Energy Agency (IEA) just released their World Energy Outlook 2010, and their prediction is that over the next quarter century, China’s energy demand will increase by 75 percent.[vi] According to the IEA, China’s energy growth will represent more than one-third of the total global increase in consumption, with the developing nations representing over 90 percent of the total growth in energy consumption. In their Outlook for 2009, IEA predicted that between 2007 and 2030, China’s energy growth would be 31 times higher than that of the United States.[vii]

Consumption of all fuels is expected to increase in the IEA 2010 forecast, with fossil fuels representing over 50 percent of the increase in global consumption through 2035. Electricity demand is expected to grow faster than any other form of energy, with developing countries representing 80 percent of the increase. Oil consumption is expected to grow by 18 percent and natural gas consumption by 44 percent. As a result of this growth in fossil energy, particularly coal, carbon dioxide emissions are expected to increase by 21 percent, regardless of the druthers of the industrialized world. China currently uses in excess of 3 times as much coal as the United States. [viii] 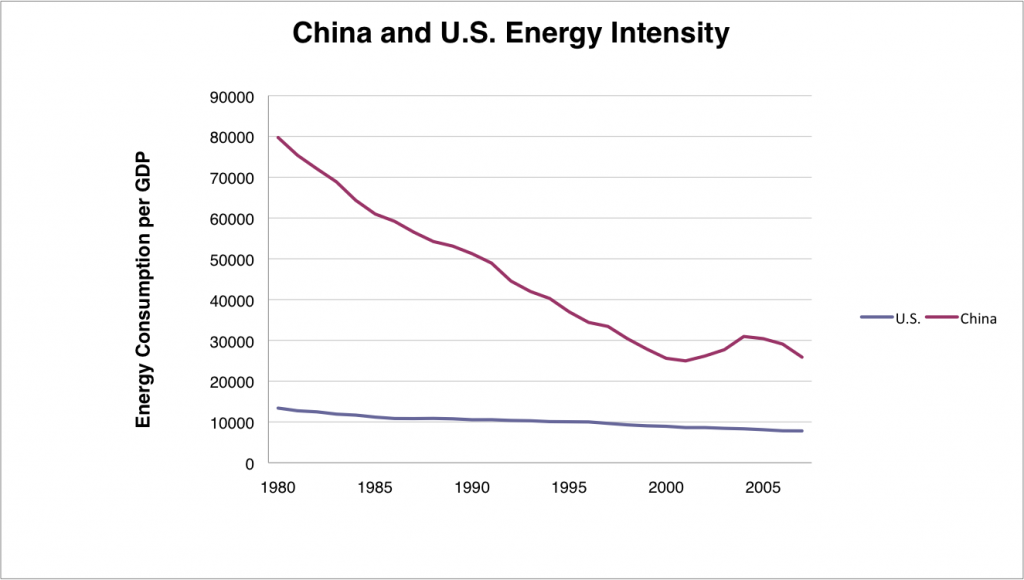 China’s quest to keep economic growth strong means that they will continue to build generating capacity—all forms of generating capacity, approaching or exceeding U.S. capacity levels. China’s electricity demand is expected to triple in the next 25 years, according to the IEA.[xi] By 2025, the IEA predicts that China will add about 1,000 gigawatts of generating capacity, which is equal to the current total generating capacity in the United States. Much of that capacity will be coal-fired. This year alone, China is importing 120 million metric tons of coal, 16 percent more than in 2009,[xii] to supplement its own coal production and consumption, the largest in the world.

Part of China’s plan in the generating sector is to build nuclear units, and it currently has more nuclear units under construction than any other country.[xiii] Those units will supplement the 10.8 gigawatts that it currently has, representing 1 percent of its total electricity capacity. According to the National Development and Reform Commission, China’s goal is to have 112 gigawatts of nuclear power by 2020, making up 7 percent of the expected 1,600 gigawatts of capacity to be built by then.[xiv] That amount of nuclear capacity will exceed the total nuclear capacity in the United States, which is currently the largest in the world.[xv]

Carrying on with its strategy to form business partnerships with countries around the world to secure future energy supplies, China has entered into a strategic partnership with France, the world’s second largest generator of nuclear power, to build reactors and exploit uranium mines to the tune of $20 billion of business contracts, including a $3.5 billion deal for 20,000 metric tons of uranium. The two countries plan to work on nuclear reactors, fuel recycling and uranium extraction and may sell the products of their collaboration to third parties.[xvi]

The country is also expected to accelerate hydropower capacity over the next 5 years towards its move to clean technologies, according to the Energy Research Institute under the National Development and Reform Commission,[xvii] even though it already has the largest hydroelectric power capacity in the world.[xviii] It will also increase its capacity of wind and solar energy,[xix] but because of the low capacity factors of these generating technologies relative to those of fossil fuels, nuclear, and hydropower, and their need for back-up power when the wind doesn’t blow and the sun doesn’t shine, they will contribute little towards reducing China’s coal consumption.

According to the China Electricity Council, China’s coal dominance in the electric generating sector will not change and coal consumption will continue to increase each year,[xx] even though coal’s share of total energy consumption is expected to drop from 70 percent in 2009 to 63 percent in 2015, according to China’s National Energy Administration.[xxi] 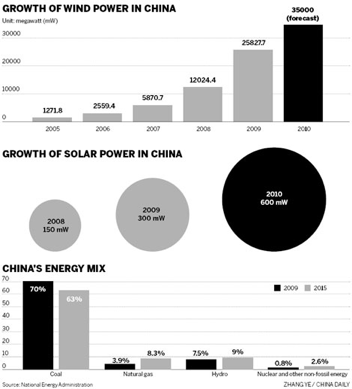 China expects its economy to continue to grow and knows that it needs energy to fuel that growth. Forecasts by respected organizations have its economy exceeding ours shortly, whether 2 years or a decade is still unknown, but the direction is clear. China is pursuing business partnerships around the world to ensure that it has needed supplies of energy, first with oil and now with nuclear power. It is continuing to support its coal consumption and hydroelectric power sectors, the largest in the world. Obama and Congress should take lessons from the most populated country soon or the United States will become a second rate power, with only ourselves to blame.

[i] The Telegraph, China may be bigger economy than the US within two years, November 10, 2010, http://blogs.telegraph.co.uk/finance/jeremywarner/100008581/china-may-be-bigger-economy-than-us-within-two-years/

[v] The Telegraph, China may be bigger economy than the US within two years, November 10, 2010, http://blogs.telegraph.co.uk/finance/jeremywarner/100008581/china-may-be-bigger-economy-than-us-within-two-years/

Daylight Saving Time: Yet Another Failed Government Program to Save Energy