China plans to build over 100 nuclear reactors in the next decade, according to the country’s latest five year plan. The government will invest over $100 billion to construct six to eight nuclear reactors annually between now and 2030. By 2020, China should have 58 gigawatts of nuclear capacity.[i] By 2050, China’s nuclear power should exceed 350 gigawatts, having spent over a trillion dollars in nuclear investment.[ii] In just ten years, China’s nuclear capacity will likely exceed our own, which is slowly being shuttered. At the beginning of 2013, the United States had 104 nuclear reactors. By the end of 2014, there were 99. Earlier this week, Entergy indicated another fatality—the company will shutter the James A. FitzPatrick nuclear plant, outside of Syracuse, New York, by early 2017.[iii] While the United States has a handful of reactors under construction, these few reactors fall far short of China’s massive building program, as well as China’s desire to have the most advanced nuclear fleet technologically.

China has 29 nuclear power reactors in operation, 22 under construction, and more will break ground soon.[iv] The country plans to install about 150 gigawatts of nuclear power by 2030. To ensure that it has the most technologically advanced nuclear fleet in the world, the China National Nuclear Corporation signed an agreement with TerraPower, which is affiliated with Bill Gates, to construct the world’s most advanced nuclear reactor by 2030. 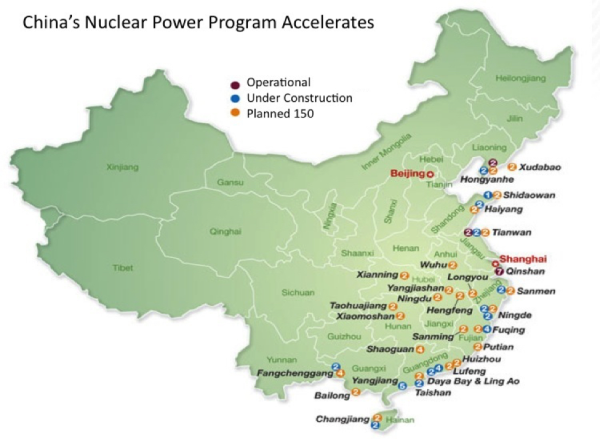 China is building nuclear reactors quickly and cheaply—about 5 years per reactor and $2000 to $2500 per kilowatt. China’s Yangjiang Unit 3 in western Guangdong province went on line this year after less than five years of construction. Yangjiang Unit 2 is in commercial cooperation, having been in low power operation earlier this year. The six Chinese-designed reactors at Yangjiang of 1,000 megawatts each will cost $11.5 billion or just under $2000 per kilowatt—about a third of the cost in most western countries.

Changjang Unit 1, on Hainan Island, is expected to be delivering power by December—just five years after construction began.  A second unit will be completed next year and 2 more units will begin construction in 2018. The cost of the first two 600-megawatt units is about $3.15 billion, or about $2,600 per kilowatt—again much cheaper than U.S. construction.

Fangchenggang Unit 1 came on line five years after construction began in Guangxi province, which is close to the Vietnam border. It is the first nuclear reactor in that province and will be joined by 5 other reactors for a total cost of about $12 billion.

Similar to other energy areas (e.g. solar panels), China wants to become the leading exporter of nuclear technology. China has become practically self-sufficient in the design and construction of nuclear reactors by adapting and improving upon Western technology.

Nuclear Power in the United States

A few years ago, it was assumed that most existing U.S. nuclear plants would easily obtain 20- or 30-year license extensions from the Nuclear Regulatory Commission (NRC), which would carry the bulk of the U.S. nuclear fleet into the 2040s and beyond. However, extremely long and uncertain reviews by the NRC have resulted in early retirements rather than life extensions. Two units at the San Onofre Nuclear plant in California were shuttered because of the NRC not granting life extensions after extensive work had been done on the units. The NRC reviews were taking so long that the plant operators had to close the plants due to the expense of keeping them in operating condition and purchasing power to replace their output.[v]

Merchant power plants, whose rates cannot be recovered through regulated cost-of-service rates, have found it difficult to compete with low natural gas prices and increasing regulations. The Kewaunee Power Station in Wisconsin, about 35 miles southeast of Green Bay on Lake Michigan, was retired. The Vermont Yankee nuclear power plant, which supplied 75 percent of Vermont’s power, also closed. In retiring Vermont Yankee, Entergy cited a number of financial factors, including: low wholesale electricity prices—driven in part by lower natural gas prices, which have reduced the profitability of the plant— increasing capital costs for maintaining the unit, low prices in the regional market for electric generating capacity, and increased costs to comply with new federal and regional regulations. The latest casualty is the James A. FitzPatrick plant in New York, which is closing because of wholesale power price declines and other unfavorable market conditions.

Furthermore, the market for new nuclear power in the United States is not good. While there are a few plants currently under construction, there is no plan to continue building them. The Tennessee Valley Authority recently completed and upgraded Watts Bar Unit 2, which is the first site in the United States to comply with NRC’s new Fukushima-related Orders on Mitigation Strategies and Spent Fuel Pools. NRC provided Watts Bar Unit 2 with the first 40-year operating license to be issued since 1996, when Watts Bar Unit 1 received its operating license.[vi]

There are 4 other nuclear units currently under construction in the United States. In February 2012, the NRC approved a license allowing for the construction and conditional operation of two new nuclear reactors at the Vogtle nuclear power plant in Georgia, marking the first time the commission green-lighted construction for a new reactor since 1978.[vii] Then, in March 2012, the NRC approved a second license allowing construction and conditional operation of two new reactors at Scana Corp.’s Virgil C. Summer nuclear power plant in South Carolina. [viii]

The United States is no longer the world’s leader in nuclear technology, as China is building state-of-the-art nuclear units galore and will surpass the United States in nuclear capacity in the next decade. The Chinese are poised to have the most advanced nuclear fleet in the world and are building nuclear reactors quickly and cheaply. Their construction is completed in half the time it will take in the United States and their cost is about one-third less, because China does not have the extensive red tape that the United States has. Their predominance in constructing them in China will enable them to develop export markets for their technology, as well, which will benefit their economy long into the future. China sees energy development as good for their economy, and good for their export markets in the future.

[i] Asia One, China Poised to Speed Up Nuclear Power Investment, October 16, 2015, http://news.asiaone.com/news/asia/china-poised-speed-nuclear-power-investment

Lame Duck President Rejects Will of the American People