Only in Washington D.C. would a program that costs hundreds of billions of dollars and perhaps over one trillion dollars, be called “comparatively modest.” But that’s what Congressional Budget Office (CBO) director Douglas Elmendorf said about the costs of cap-and-trade in his recent testifimony [.pdf] before the Senate Committee on Energy and Natural Resources.

Elmendorf’s testimony was in response to a revision of CBO’s original report on the cost of the Waxman-Markey bill. When the original report came out, IER showed that CBO’s own numbers demonstrated that the economic costs of Waxman-Markey’s cap-and-trade scheme far outweighed its benefits to American citizens, and arguably even to the world as a whole. In the present post, we explain why Elmendorf’s three key points are misleading. Elmendorf calls hundreds of billions of dollars in lost future economic growth a “modest” reduction, he obfuscates by focusing on purchasing power instead of on the reduction in total income, and contrary to economic theory, assumes that low- and middle-income families will benefit from free allowances handed out to utilities. By simply stressing different aspects of the same underlying CBO analysis, one could have painted a much bleaker picture of the costs of cap-and-trade than Elmendorf chose to convey.

The first trick Elmendorf deploys is to dismiss reductions in GDP as “modest” because they won’t occur until Americans are wealthier than they are today:

Reducing the risk of climate change would come at some cost to the economy. For example, the Congressional Budget Office…concludes that the cap-and-trade provisions of H.R. 2454…would reduce gross domestic product (GDP) below what it would otherwise have been—by roughly ¼ percent to ¾ percent in 2020 and by between 1 percent and 3½ percent in 2050. By way of comparison, CBO projects that real (inflation-adjusted) GDP will be roughly two and a half times as large in 2050 as it is today, so those changes would be comparatively modest.

Although the CBO director brushes it off, a potential cost of 3.5 percent of total economic output is enormous. In 2008, US GDP was $14.4 trillion. The high-end cost estimate of 3.5 percent works out to $504 billion. Yes, it’s certainly true that if you asked people back in 1970 if 3.5 percent of GDP forty years in their future was a big deal, they probably would have said “Not really.” Yet the people in 2008 would certainly have been upset if $504 billion were sucked out of the economy because of a program implemented forty years earlier.

While CBO calls a 1 percent to 3.5 percent reduction in GDP by 2050 a “modest” cost, what about the benefits? The true irony here is that Elmendorf’s testimony provides an estimate of the cost of global warming. CBO argues that “a relatively pessimistic estimate for the loss in projected real gross domestic product [GDP] is about 3 percent…by [the year] 2100”. So if Elmendorf is allowed to blow off 1 percent to 3.5 percent in GDP because people will be so much richer by 2050, why are we rushing through legislation to avert potential climate change that the same CBO predicts might cost 3 percent of GDP at the end of the century? Won’t Americans be really wealthy by 2100?

Focusing on Consumption Purchasing Power Rather Than Total Income

After assuring the senators that reductions in GDP were modest, Elmendorf then changed the measuring rod:

In the models that CBO reviewed, the long-run cost to households would be smaller than the changes in GDP. Projected GDP impacts include declines in investment, which only gradually translate into reduced household consumption.

This statement is technically true but it is very misleading. Suppose a household currently enjoys a take-home income of $100,000, out of which they put $10,000 into funding retirement and the kids’ college tuition, while the other $90,000 they spend on the mortgage, dining out, clothes, gasoline, and other household necessities. The politicians come along and propose a new tax that will grab an extra $5,000 a year, leaving the family with a new after-tax income of $95,000.

Now most people would think, “Wow, I’m $5,000 a year poorer.” But the apologists for the tax hike could argue, “Actually you’re not really $5,000 poorer, in terms of your lifestyle. You won’t cut out your spending on groceries and food by the full $5,000. Because of your lower income, you will reduce your savings to $9,000 a year, and your other spending down to $86,000 a year. So really the hit to your household’s consumption is only $4,000 per year.”

Would anybody buy that argument? Of course not. Income is income. The “long-run cost to households” will certainly be affected by declines in investment spending, which is counted in GDP. By focusing on a decline in “purchasing power” of 1.2 percent for households by 2050—rather than their estimate of 1.1 percent to 3.5 percent of lost GDP—the CBO is effectively sweeping half the impact under the rug.

The last trick we’ll note is that the CBO analysis simply takes the government at its word that low-and middle-income families will benefit from the free allowances that will be handed to utilities under the provisions of Waxman-Markey, even though this flies in the face of standard economic theory. As a recent IER study showed, Congress plans on using allowance handouts in order to transfer money from consumers (through higher prices) into the pockets of special interests.

The reader may be interested to see the CBO’s estimates of the actual hike in household costs from Waxman-Markey’s cap-and-trade scheme, before adding in the free allowance handouts: 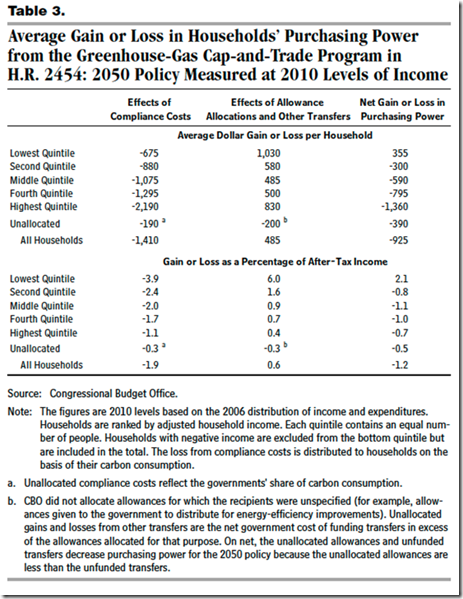 As the first column makes clear, middle class families are expected to suffer a hit of more than $1,000 per year in higher prices. (And remember, this figure is the one that has already been cut in half using the total output vs. consumption trick explained above.) Whatever happened to “a postage stamp a day”? Does the CBO know something about the Postal Service’s intentions that we don’t?

During a recent hearing, Elmendorf made clear there were substantial costs to cap-and-trade. According to the Washington Post he said:

“The shifts will be significant,” the CBO director said. “We want to leave no misunderstanding that aggregate performance—the fact that jobs turn up somewhere else for some people—does not mean that there are not substantial costs borne by people, communities, firms in affected industries and affected areas. You saw that in manufacturing, and we would see that in response to changes that this legislation would produce.”

Even Elmendorf agrees there are substantial costs to cap-and-trade. And as we have shown, he and the CBO are still underestimating the costs.

Wind Lobby Huffs and Puffs, But Can’t Blow the Facts Away