Many states have or are considering raising their gasoline taxes, in most cases to pay for rehabilitating their roads and bridges. About 20 states have increased their gasoline taxes or recalculated their gasoline-tax formulas recently to generate funds for maintaining roads and bridges, and at least a dozen more are considering such changes. A poll shows most U.S. residents are in agreement with gasoline tax increases, but only if they are used to pay for infrastructure improvements. The federal government’s gasoline tax is part of the U.S. Highway Trust Fund and Congress has used that money for both infrastructure and other transportation projects, including mass transit. Former President Obama tried a $10-tax on a barrel of oil for green transportation projects that failed in Congress. It would have increased the gasoline tax about 25 cents a gallon.

The Highway Trust Fund was established by The Highway Revenue Act of 1956 with the intent of paying for the construction of the interstate highway system by linking the users of roads and bridges to the costs of building and maintaining them. However, in 1983, Congress diverted one-ninth of the then nine-cent-per-gallon gasoline tax to a new account covering mass transit. In 1993, the motor fuels tax rates were increased to their current levels of 18.4 cents per gallon for gasoline and 24.4 cents per gallon for diesel with the highway account receiving 84 percent of the gasoline tax revenue and the mass transit account receiving 16 percent.

Thus, gasoline and diesel consumers throughout the country are paying to subsidize mass transit. Transit ridership throughout the United States is relatively small–about two percent of all trips and five percent of work trips. Mass transit’s strength is located in the large central business districts where employment densities are 100 times the urban average, and which are served by rapid transit. In New York, Chicago, Boston and San Francisco, for example, more than half the workers use mass transit.

Besides transit, the transportation alternatives program also receives highway trust fund revenues. That program funds pedestrian and bicycle paths and facilities, recreation trails, landscaping, environmental mitigation, and transportation museums. From FY 2009 to FY 2011, the Federal Highway Administration obligated over $3.1 billion for these activities. The surface transportation law, Moving Ahead for Progress in the 21st Century, eliminated some of the previously eligible activities but required a 2 percent set-aside of total highway funding to fund the activities that remained.

According to a survey conducted by the San Jose, California-based Mineta Transportation Institute, 71 percent of U.S. residents would support a 10-cent increase in the 18.4 cents-per-gallon gasoline tax that is used to pay for federal transportation projects. However, the survey found that support for increasing the gasoline tax to 28 cents-per-gallon dropped to 31 percent if the money is used to “maintain and improve the transportation system” instead of “improve road maintenance.”[i]  Clearly, U.S. residents want their roads and bridges maintained, but are less interested in funding arbitrary transportation projects.

Another example of a tax that did not fly is President Obama’s $10 a barrel tax on oil to pay for green energy transportation projects.[ii] A $10 a barrel tax on oil would mean about a 25 cent increase in the cost of a gallon of gasoline. This regressive tax proposal that then-President Obama submitted as part of his 2017 budget plan, however, was a non-starter with Congress.[iii]

About 20 states have increased their gasoline taxes or recalculated their gasoline-tax formulas recently to generate funds for maintaining roads and bridges. And, according to Kevin Pula, a transportation policy specialist at the National Conference of State Legislatures, at least a dozen more are considering such changes. States are taking such actions because of increasing construction costs and lower tax receipts from declining pump sales due to more fuel-efficient vehicles and a slow economic recovery.

In New Jersey, the state’s gasoline tax was raised by 23 cents a gallon, up from 14.5 cents per gallon, on November 1, 2016. The 23-cent increase was the first increase in New Jersey’s gasoline tax since 1988. New Jersey had the second lowest fuel tax in the nation after Alaska, but it now ranks in the top 10 highest. State lawmakers voted for the tax increase to help pay for an eight-year, $16 billion transportation trust fund. The state’s transportation trust fund had expired last year and the governor had to order a halt to transportation projects. The gasoline tax increase was offset by the elimination of estate taxes and a cut in sales taxes.[iv]

Alaska, which has the lowest gasoline tax in the country, has not increased its tax since 1970. On December 15, 2016, Governor Bill Walker proposed tripling the state’s gasoline tax over the next two years as part of the state’s budget. If approved, the current tax of 8 cents per gallon will double July 1, 2017, and add another 8 cents per gallon on July 1, 2018. Alaska has been funding its budget by taxing the state’s oil and gas production; but, lower oil prices and declining production has drained the state’s coffers. Alaska is trying to deal with a $3 billion fiscal gap, after state revenues collapsed by more than 80 percent from four years ago due mainly to the drop in oil and natural-gas prices.

Tennessee’s Governor proposes to add 7 cents to the state’s 21-cents-a-gallon tax for regular gasoline, and 12 cents to the 18-cents-a-gallon diesel tax. Tennessee needs more than $10 billion over the next 10 to 12 years to fund road and bridge repairs. The proposed tax hike would be offset by a reduction in the state sales tax on food and ingredients and tax cuts for manufacturers to lure more businesses to the state.[vi] 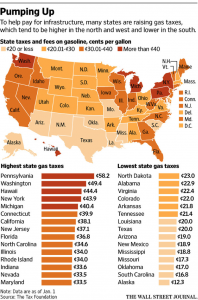 Components of the Gasoline Price

The retail price of gasoline includes four main components: the cost of crude oil, refining costs, distribution and marketing costs, and taxes. As the chart below shows, the cost of crude oil is the largest component. The federal gasoline tax is 18.4 cents per gallon, and there is an additional Leaking Underground Storage Tank fee of 1 cent per gallon. As of July 1, 2015, state taxes on gasoline, including state and local government taxes and fees averaged 26.49 cents per gallon. Combined, federal, state, and local taxes represented 19 percent of the cost of regular grade gasoline.[vii] 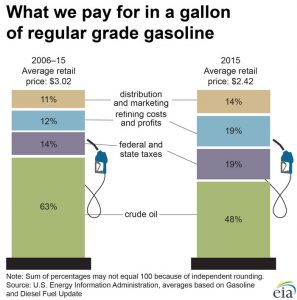 States are either raising or looking to raise their gasoline taxes either to fund their state’s budgets or to maintain and improve their roads and bridges. It seems that U.S. residents are willing to pay higher gasoline taxes for road maintenance, but are less interested in supporting general transportation projects.