On August 12 the American Council for Capital Formation (ACCF) and National Association of Manufacturers (NAM) released their study of the economic impacts of the pending Waxman-Markey bill. Proponents of Waxman-Markey hailed the study as showing the economic benefits of the bill. However, in actuality the ACCF/NAM study shows the opposite: Waxman-Markey will destroy American jobs and make the United States materially poorer.

The self-described progressives at the “Wonk Room” were quite pleased with the ACCF/NAM verdict on Waxman-Markey, coming from what they viewed as such an odious organization:

A new analysis of the economic impact of clean energy legislation forecasts powerful job and economic growth through 2030. The analysis of the Waxman-Markey American Clean Energy and Security Act (ACES), commissioned by the right-wing National Association of Manufacturers and the American Council for Capital Formation (ACCF), finds that 20 million new jobs will be created in the United States by 2030, even under high-cost assumptions…

The Wonk Room blog post then offered the following graph: 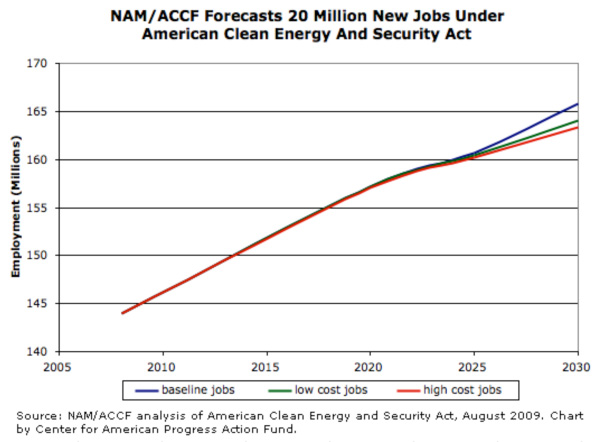 The Wonk Roomer’s point was that even the red line grows over time. In other words, the United States in the year 2030 will have more total jobs than in 2009, even with the passage of Waxman-Markey into law.

But the relevant point, of course, is that the red line is lower than the blue line, which is the status quo baseline. Far from praising the Waxman-Markey cap & tax (and related, inefficient measures), the ACCF/NAM study estimates that the U.S. economy will have lost anywhere from 1.8 to 2.4 million jobs because of government meddling in energy markets. In addition, real GDP will be anywhere from $419 – $571 billion lower in 2030 if Waxman-Markey takes effect.

A healthy economy will naturally see its output grow over time, because of population growth, rising worker productivity, capital investment, and technological breakthroughs. Over the course of twenty-one years, a normal economy will grow, despite occasional troughs in the business cycle. For example, the U.S. economy was much wealthier in 2001 than in 1980, and in 1980 it was much wealthier as compared to 1959.

Because of this natural trend for secular growth, it would be quite shocking if U.S. GDP actually fell from the year 2009 through 2030. Maybe a return of the bubonic plague, or an attack on California’s fault line by Lex Luthor, could yield such utter devastation as to keep total output stagnant over such a long period. To give some historical context, recall that the great stock market crash occurred in 1929, after which followed a decade of Depression. Yet real GDP in 1950 was more than double what it had been twenty-one years earlier, in 1929. So the fact that real GDP will continue to grow despite the imposition of Waxman-Markey is hardly reassuring; such logic would have “proved” the harmlessness of the Great Depression.

If their assessment of the economic costs of Waxman-Markey is overly optimistic, the Wonk Room’s expectations of a more stable climate are even more wrongheaded. In criticizing the alleged sins of omission of the ACCF/NAM study, the Wonk Room writer claims:

Essentially, NAM is assuming that American companies will be unable to deploy clean energy and energy efficiency technologies in a timely fashion. It’s odd that the National Association of Manufacturers is so gloomy about its members’ ability to build the clean energy economy. Even so, its analysis finds vibrant economic growth while global warming pollution is kept under control. [Emphasis added.]

This is a typical misconception that needs correction. By itself, passage of Waxman-Markey will do almost nothing to halt climate change, according to the standard models used by the IPCC. This is not a “right-wing” talking point. Even pro-interventionist climate scientists agree that India, China, and Russia will have to impose their analogous cap and tax programs on their own economies, in order for Waxman-Markey’s targets to have any impact on the global growth in emissions. But the inconvenient truth for the bill’s proponents is that officials from India, China, and Russia have made it crystal clear that they are not going to follow the Americans off the cliff of inefficient energy.

The ACCF/NAM analysis is another in a long line of studies which shows that cap and trade and “green jobs” subsidies result in a net job losses and increased energy prices. In fact, no analysis or credible person has suggested that the legislation would not increase energy costs. And while the figures of lost jobs vary, they all reach the same conclusion: cap and trade kills jobs and increases energy prices.

ICYMI: Cold in the dark prospects