The Congressional Budget Office (CBO) at the request of the Senate Energy and Natural Resources Committee evaluated federal subsidies received by the various energy industries for fiscal year 2011.[i] The agency found that energy-related subsidies totaled $24 billion, of which $16 billion were spent on renewable energy and energy efficiency and $2.5 billion on fossil fuels in fiscal year 2011. In other words, renewable energy technologies and energy efficiency programs received 6.4 times more subsidies than fossil fuels received. The ethanol industry, which received over $6 billion, was the single largest renewable energy recipient and the wind industry was the second largest renewable energy recipient, according to CBO.[ii]

The Energy Information Administration (EIA) evaluated federal subsidies for fiscal year 2010 using a broader definition and found that federal energy-related subsidies and financial interventions totaled $37.2 billion, of which $21.3 billion was for renewable energy and energy efficiency (57 percent) and $4.2 billion was for fossil fuels (11 percent). They were in agreement with the CBO on biofuels and wind being the largest renewable recipients of subsidies. But, EIA also found that the largest recipients of subsidies also produced the smallest amounts of energy for the nation. (IER’s write-up of the EIA study is here.)

Energy-related tax preferences were initiated almost 100 years ago, in 1916, but had dwindled to a very small amount by the late 1980s and did not grow substantially again until the Energy Policy Act of 2005 was enacted.  That act was followed by the Emergency Economic Stabilization Act of 2008 and the American Recovery and Reinvestment Act of 2009, which expanded and extended the provisions related to energy efficiency and renewable energy. By fiscal year 2011, energy efficiency and renewable energy accounted for 78 percent of the estimated budgetary cost of federal energy-related tax preferences. The breakdown of tax preferences for fiscal year 2011 was: renewable energy (68 percent), fossil fuels (15 percent), energy efficiency (10 percent), nuclear energy (4 percent), and other (2 percent).[iii]

About half of the total subsidies were from four tax provisions that expired at the end of December 2011 (a credit for energy efficiency improvements in existing homes, an excise tax credit for alcohol fuels, an excise tax credit for biodiesel except for cellulosic biodiesel which expires at the end of 2012, and the section 1603 grants). They totaled just over $12 billion, accounting for about 60 percent of the budgetary impact in 2011 of the energy-related tax preferences. The expired tax provision for the use of alcohol fuels totaled over $6 billion. 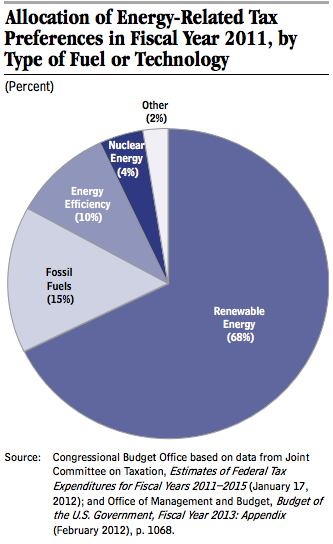 The EIA’s study of energy subsidies used a broader definition of subsidies, but arrived at similar conclusions about the relative magnitudes of the subsidies for different energy sources. The EIA study covered the following categories in its analysis of energy-related federal financial interventions and subsidies in fiscal year 2010: direct expenditures to consumers and producers, tax expenditures, research and development expenditures, loan and loan guarantees, and electricity programs serving targeted consumers. The boarder definition mainly accounts for the higher level of federal subsidies ($37 billion) in fiscal year 2010 than the CBO found a year later ($24 billion), even though the American Reinvestment and Recovery Act had been in effect for a year longer in the CBO study. Both studies are in agreement that biofuels are the largest renewable fuel subsidy recipient, followed by wind.[iv] A complete summary of the EIA report can be found here.[v] 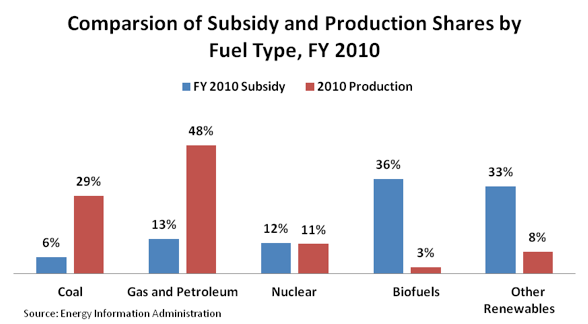 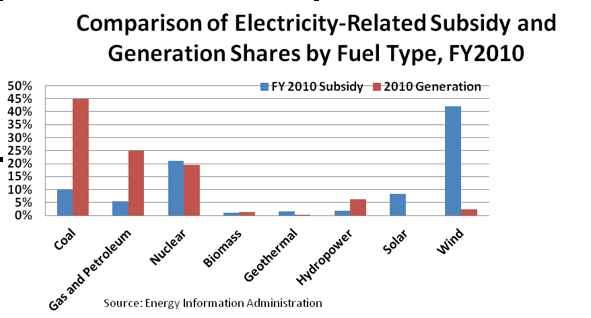 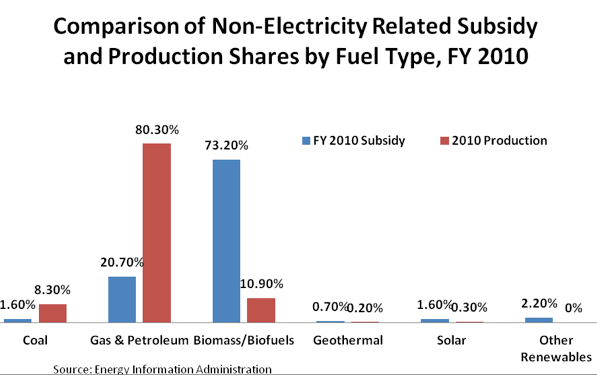 Subsidies are not just taxpayer handouts. They have other ramifications in the economy. One of which is that they destroy jobs elsewhere. Instead of creating jobs, they shift jobs from one sector of the economy to another. A study analyzing Spain’s experience with renewable energy and job shifting found that for every renewable job, 2.2 jobs were lost elsewhere in the economy.[vi]   Spain is now experiencing the exodus of its renewable energy industries because its financially strapped government and 20+ percent unemployment means neither the government nor consumers can afford to pay for the more expensive energy renewable sources provide.[vii]

Subsidies also create industry dependence on the government because they remove the incentive for companies to make their technologies cost-competitive from the onset. They also tend to offset financing from the private sector—a sector that has a much better track record for picking winners and losers than does the government. Often, subsidies provide financing to companies that would have undertaken the investment without the subsidy support. It has also been found that industries that benefit from subsidies will spend more money lobbying for continued government handouts.[viii] Clearly, the American Wind Energy Association and the Renewable Fuels Association have continued to lobby for renewable subsidy extensions when they have already received them for decades without making their technologies cost-competitive.

From the EIA study, we see that those energy fuels/technologies receiving the largest subsidies are producing the least amount of energy for the nation. And those technologies, some of which have been subsidized for decades, are still a long way from being cost-competitive given the lobbying that their industry associations are doing to continue their subsidization. As the CBO report points out, some subsidies expired last year and more will expire this year if not renewed by Congress.

Clearly, there are issues with subsidies. Wise investments would most likely have been undertaken anyway even without the expenditure of government funds. The shifting of jobs from one economic sector to another can actually result in more job losses than gains as Spain found out.  Furthermore, governments do not have a good track record for picking winners and losers as we are finding out with providing loan guarantees to companies like Solyndra. Even the CBO is critical regarding government tax breaks, stating that, “they are generally an inefficient way to reduce environmental and other external costs of energy. They often reward businesses for investments and actions they intended to take anyway.”[ix]

When the government provides subsidies for industries, these subsidies come at a cost. We should have learned from the expierence of Spain that subsidies come at a high price. The question for policymakers is whether the United States can afford to continue heavily subsidizing sources of energy that cost more and cannot make it in the market.

[i] Congressional Budget Office, How Much Does the Federal Government Support the Development and Production of Fuels and Energy Technologies?, March 6, 2012, http://www.cbo.gov/publication/43040