Last week, President Biden invoked the Defense Production Act to increase domestic production of minerals used in making electric vehicles, such as nickel, lithium and cobalt. The president said that the country depended on unreliable foreign sources for many materials necessary for transitioning to the use of renewable energy and reports have stressed this for years. The irony of the situation is that in January, the Biden administration revoked the federal leases for the Twin Metals mine in Minnesota that contains copper, nickel, cobalt, and platinum-group elements. Instead of producing these metals domestically, last June, President Biden indicated that he wants to import them. Yet, now he supposedly changed course, claiming he wants to produce them in the United States.

Twin Metals is not the only mine where conflicts to development and production exist. The PolyMet copper and nickel mine is located within Minnesota’s Mesabi Iron Range and would be the first copper-nickel open-pit mine in Minnesota. Besides holding significant deposits, the project has existing rail, roads, utilities and an established supplier network in a traditional mining area but is being held up by court and regulatory action despite having undergone more than a decade of thorough, public environmental reviews.

Ioneer Ltd.’s lithium mine in Nevada, which could supply 22,000 metric tons of lithium annually—enough for about 400,000 electric cars, is being held captive by environmentalists, who claim the mine threatens Tiehm’s buckwheat, a rare flowering plant. The Trump Interior Department had refuted that after an extensive analysis, indicating that the culprit of the buckwheat was hungry squirrels. Despite that analysis, environmentalists asked the Biden administration to list the buckwheat as an endangered species, and Biden regulators subsequently proposed a listing to that effect, placing the mine in limbo.

The Resolution copper mine in Oak Flat, Arizona, which can meet about 25 percent of U.S. copper demand, is currently under federal environmental review. In September 2021, the House Natural Resources committee voted to include language in the reconciliation package to block the building of the Resolution copper mine. The Rosemont copper mine in the northern Santa Rita Mountains in Arizona received a setback when Federal regulators rejected its mining company’s request to reduce critical habitat for jaguars deemed endangered on land that overlaps the footprint of the proposed mine. Hudbay Minerals Inc. has been working for more than a decade to get permission to open the mine that could create thousands of jobs and bring billions in economic development to the region. The mine only needed about 6 percent of the land that had been excluded for the jaguars.

The Pebble copper and gold mine, 100 miles from Bristol Bay, Alaska had its permit application rejected in November 2020 by the U.S. Army Corps of Engineers. In January 2021, the Pebble Partnership requested the Army Corps of Engineers to reverse its denial of the proposed mine’s Clean Water Act dredge and fill permit. According to Northern Dynasty Minerals, the decision is receiving new oversight and is likely to take a year or longer. However, the Environmental Protection Agency indicated that, depending on the outcome in the courts, it would reopen a proposed veto of the Pebble mine, which, if finalized, would effectively block its development on state-owned lands. That process, started under the Obama administration, culminated in a proposed veto of the mine in 2015, before Pebble had even filed a permit application with the Army Corps of Engineers. This was the first time a U.S. mine had been stopped before it could apply for a permit based upon its scientific findings.

Recently, regulators suspended a right-of-way for a road in Alaska, previously granted by the Trump administration, which provided access to one of the world’s largest mineral deposits including zinc and copper. On March 11, the Bureau of Land Management (BLM) notified the Alaska Industrial Development and Export Authority that it suspended a previously issued 50-year right-of-way that covers 25 miles of a proposed 211-mile road connecting the Ambler Mining District to Alaska’s highway system. Biden’s Department of Interior determined that the effects the proposed Ambler Road might have on subsistence uses were not properly evaluated and that tribes were not adequately consulted prior to issuing the right-of-way, despite seven years of such evaluations and consultations. Further, BLM’s right-of-way suspension notice did not identify any specific deficiencies or corrective action plan, which leaves the development authority at a federal roadblock without any indications of what needs to be done or how long it will take to gain access to the Ambler Mining District.

The Defense Production Act gives the president significant emergency authority to control domestic industries for the purpose of national defense. By invoking the Act, Biden is asking the private sector to develop a local supply chain around renewable energy by ensuring the government will pay for some of the costs, such as feasibility studies for new mines. The move supposedly could speed up several new and proposed mining and extracting projects that are in various stages of development. As noted above, however, many of those projects are facing opposition from environmental groups and are further held in limbo by Biden regulators.

The law has been used recently both by President Trump and President Biden. President Trump invoked the act in 2020 to help clear up supply-chain issues encountered in the manufacturing of ventilators and to ensure the production of additional N95 face masks due to the coronavirus pandemic. Biden invoked the act last year to speed up COVID vaccination and testing.

The United States and the 30 other O.E.C.D. member nations of the International Energy Agency recently launched a critical minerals security program that could eventually include steps such as the stockpiling of metals needed for electric vehicles and other renewable energy applications. It is envisioned similar to the commitment by IEA nations since the 1970s to hold strategic stockpiles of oil, which they are now liquidating in response to price increases in world oil markets.

The United States Geological Survey (USGS) under Biden expanded the list of critical minerals from 35 to 50 by breaking out rare earth minerals and precious group metals into separate entities and adding nickel and zinc to the list. Of the original 35 mineral commodities considered critical to the economic and national security of the country, the United States lacks any domestic production of 14 and is more than 50 percent import-reliant for 31. This import dependence is a problem because it can put supply chains and U.S. companies and mineral users at risk, particularly when China dominates the mineral supply chains, including most of the processing.

Most mining is done in countries with low environmental and labor standards such as cobalt mining in the Republic of the Congo where child labor is used. Half of the Congo’s largest mines are owned by China. China has used its critical mineral resources for political advantage when in 2010, it restricted exports of rare-earth minerals to Japan during a standoff over the Senkaku Islands. China has also encouraged investment in foreign mining projects as part of its Belt and Road initiative to lock up critical minerals, which has enabled China to dominate mineral processing. (See chart below.) 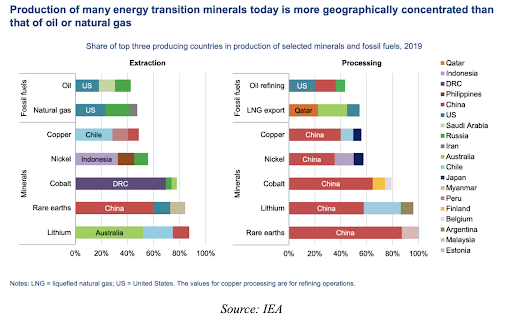 Government climate policies are driving up demand for critical minerals. An electric car includes huge amounts of graphite, copper, nickel, manganese, cobalt and lithium compared to conventional cars. Solar and wind also require more critical minerals than do fossil-fuel plants. For example, a typical electric car requires six times the mineral inputs of a conventional car, and an onshore wind plant requires nine times more mineral resources than a gas-fired power plant. Since 2010, the average amount of minerals needed for a new unit of power generation capacity has increased by 50 percent as the share of renewables has risen.

Last year, President Biden said he wanted to import these critical minerals instead of mining them domestically, despite the United States having the most stringent environmental and labor standards. In his usual contradictory fashion, however, Biden has invoked the Defense Production Act to encourage domestic mining of these critical minerals. However, unless his administration starts approving leases and permits, nothing is going to change. It is just more rhetoric for voters to believe he is accomplishing something.