Today, the House Oversight and Government Reform Subcommittee on Energy Policy, Healthcare, and Entitlements held a hearing on the Wind Production Tax Credit (PTC). Once again the wind industry trotted out the same arguments in favor of keeping and extending their subsidies, as Robert Gramlich, Senior Vice President of Public Policy for the American Wind Energy Association (AWEA), outlined in his testimony. Much of the testimony rehashed claims that the Institute for Energy Research (IER) already discredited in April of this year. If the wind PTC is extended by just one more year, it will cost the American taxpayer over $6 billion dollars. It’s time to say that enough is enough.

As the largest of the 82 federal initiatives that specifically support the wind industry, the Wind Production Tax Credit (PTC) has provided a hefty subsidy of about $20 billion to the wind industry since it was enacted in 1992. In fact, at $23 per megawatt hour (MWh), the PTC is worth more than half of the average wholesale price of electricity in the country.[i]

Last year, Congress extended and expanded the PTC as part of the American Taxpayer Relief Act of 2012, the last-minute bill to avoid the “fiscal cliff”. Rather than providing relief, however, the extension placed the American taxpayers on the hook for upwards of $18.5 billion more in subsidies to the wind industry if the PTC is extended for five years, according to the Joint Committee on Taxation.

Fleecing Taxpayers, One MWh at a Time

Despite Gramlich’s assertion that the wind PTC has been a “tremendous success,” in reality the federal handout is a bad deal for American taxpayers. Specifically, the wind PTC fails to add as much actual electrical generation or generate as many economic benefits as the wind lobby claims.

As evidence of the PTC’s success, Gramlich repeated the misleading claim that wind was the leading source of new electrical generation capacity in 2012. While true at face value, this claim ignores the fact that generation is far more important than mere capacity. It is the difference between actual performance and mere potential. Sports fans can think of the wind industry as the Ryan Leaf of energy—a highly touted prospect who simply did not produce on the field. Although wind added the most nameplate capacity last year, electricity generation from natural gas production actually increased far more. 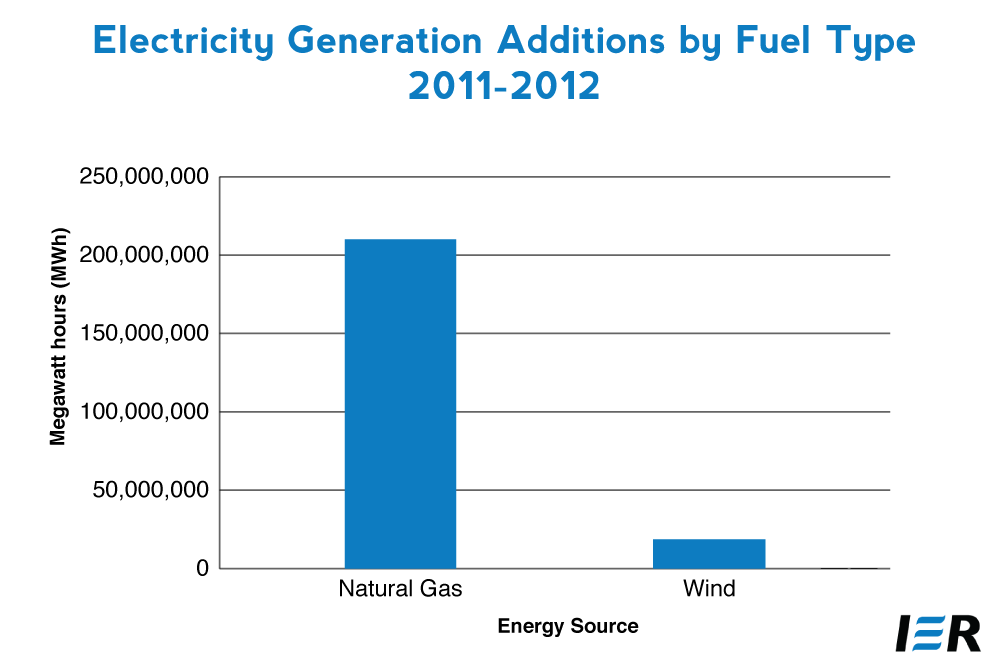 The wind lobby offers other misleading claims to protect their subsidies. For instance, in his testimony Gramlich cites a study by Synapse Energy Economics claiming that increased wind production saves consumers save almost $7 billion per year. But an examination of the study reveals fatal flaws in the methodology. First, to find $7 billion in annual savings, the study depends largely on exacting an arbitrary and malleable “price” of $30 per ton of carbon dioxide emissions.

As IER has explained before, this “price” is essentially the so-called “social cost of carbon,” a dubious metric that the Obama administration uses to justify its costly climate action agenda. Even carbon tax supporter and MIT Professor Robert Pindyck has blasted the underlying models as “close to useless.” Without the social cost of carbon, the industry’s claim that wind energy provides net benefits to consumers drops by more than 60 percent. To make matters worse, the Synapse study does not even consider the PTC in its cost-benefit analysis. It is disingenuous, then, for AWEA to use the study to justify spending billions of dollars through the PTC.

Is Wind Competitive or Not?

A recurring claim from the wind lobby is that wind is cost competitive, but that subsidies such as the PTC are still needed to compete. As Gramlich stated in his testimony:

“The cost of wind energy has dropped by 43% in the last four years, but the PTC is still needed to prevent us from relying too heavily on any single fuel source. The impending expiration of the PTC before it was extended in January had a devastating impact on the industry. Investment was put on hold and factories halted production and project installations came to a standstill.”

Wind developers can’t have it both ways. Either wind energy is competitive or it is not. If it is, then there is no need to continue propping up the wind industry with taxpayer subsidies. If it isn’t, then the PTC amounts to a waste of taxpayer funds. Either way, the PTC deserves to be “permanently terminated as soon as possible,” as IER Senior Fellow Bob Michaels testified.

Furthermore, we have no idea what Gramlich is talking about when he claims that “the PTC is still needed to prevent us from relying too heavily on any single fuel source.” Electricity generation is very diverse and has been for years, as the following chart showing generation in 2012 demonstrates: 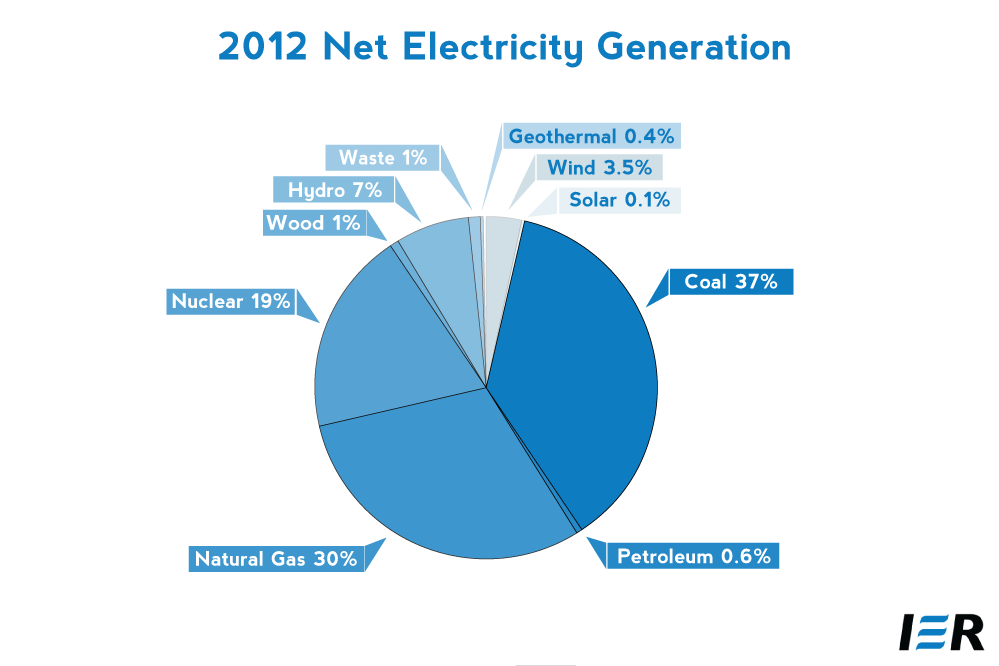 Wind was first used to generate electricity in 1887, and yet the wind industry believes that wind still needs massive subsidies to compete, despite the fact that there has been a commercial wind business since at least 1897, as the advertisement below shows. 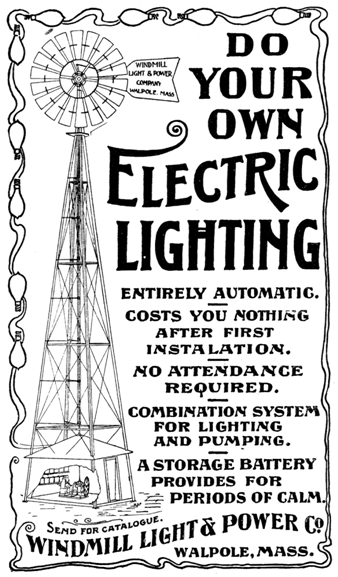 As stated above, the PTC has been around for more than two decades. Over that time, the wind industry has enjoyed not only generous handouts from U.S. taxpayers, but beneficial mandates to generate electricity in 29 states and the District of Columbia. If the industry is as competitive as AWEA claims, then there is no need for continued subsidies.

A study commissioned by the American Energy Alliance finds that it is long past time to take the training wheels off of Big Wind. The wind industry does not need the PTC. Over the last two decades, state Renewable Portfolio Standards (RPS), which provide guaranteed long-term markets for renewables such as wind, have primarily driven growth in wind development, not the PTC. 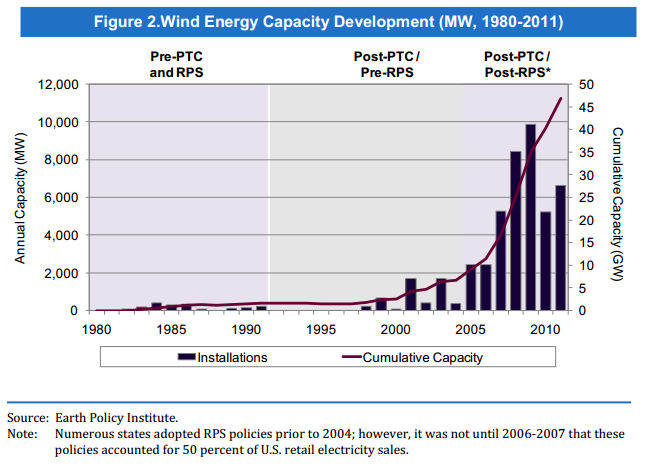 As Dr. David Dismukes, who authored the study, explains, “When you strip away all the rhetoric, the real issue is that wind is a mature industry whose growth is being fueled by aggressive RPS standards and is no longer in need of training wheels. The PTC is a costly and inefficient subsidy that is clearly no longer necessary.”

There is no reason to extend the PTC. The wind industry claims that wind is cost-competitive now, so let wind stand on its own two feet. Any industry over 100 years old should be able to compete on its own without massive subsidies from the American taxpayer.

[i] According to the Energy Information Administration’s 2012 wholesale electricity price data, the average high price for electricity in the 10 electricity markets was $34.45 per MWh and the average low price was $33.05 per MWh, Source: http://www.eia.gov/electricity/wholesale/.

IER's Robert Michaels to Testify on the Wind PTC

A Critique of the 2014 "Climate Action Report"