A new report from Ceres, a well-heeled group of Wall Street activists who work with groups such as the AFL-CIO, Environmental Defense Fund, the National Resources Defense Council and the Sierra Club[1], ranked electric utilities by how well the utilities adopted policies reflecting those of Ceres on energy efficiency and renewable energy. The point of the report is to argue that complying with EPA’s carbon dioxide restrictions for existing power plants will not be too costly. As Ceres President Mindy Lubber said, “Renewable energy and energy efficiency, two of EPA’s Clean Power Plan building blocks, are increasingly cost-effective options for electric utilities seeking to lower their carbon emissions.” The problem is that data from Ceres report shows the exact opposite—the utilities implementing the policies Ceres supports have much higher electricity rates than the average utilities, and that means their customers, the consumers of electricity, pay for the policies Ceres tries to peddle. It appears that Ceres is far more concerned about padding the wallets of their Wall Street donors and supporters than whether middle or low income families can afford electricity.

The cost of electricity from Ceres’ “top ranked” utilities is twice as expensive as the bottom ranked utilities. Electricity from top performers, like Pacific Gas and Electric Corp and Edison International — who on average charge 14.34 cents/kWh — are twice as expensive as electricity from utilities at the bottom of the ranking, such as Entergy and Dominion who charge an average of 7.67 cents/kWh.[2] This is especially alarming because EPA wants to force utilities to implement the policies of utilities like Pacific Gas and Electric and Edison International, and Ceres is backing these efforts.

Ceres described the methodology used for ranking the utilities companies as follows:

Ceres’ goal is to mobilize a coalition of wealthy investors with financial interests in renewable energy and energy efficiency mandates to “change capital market practices[4]” to benefit their products. For example, Ceres strongly advocates businesses and investors spend a “clean trillion” on clean energy solutions by 2030. Ultimately the organization seeks to accomplish their goals by working with government officials to craft regulations that guarantee a return on their enormous investments[5].

Ceres’ President Mindy Lubber did not mince words when describing her hopes for utilities and how proposed EPA’s carbon dioxide limits on existing power plants will help move utility companies that Ceres ranked at the bottom of the report to act like highly ranked utilities:

“…the time has come and we’re going to start seeing even the laggards move into at least a midrange position, and once the EPA rules go into effect, we’ll see more and more companies, because they have to do it, but we’ve got a head start and we’ve got the evidence that they can do it and that it can work.”[6]

It Appears Ceres Goal is to Drive Up Electricity Prices 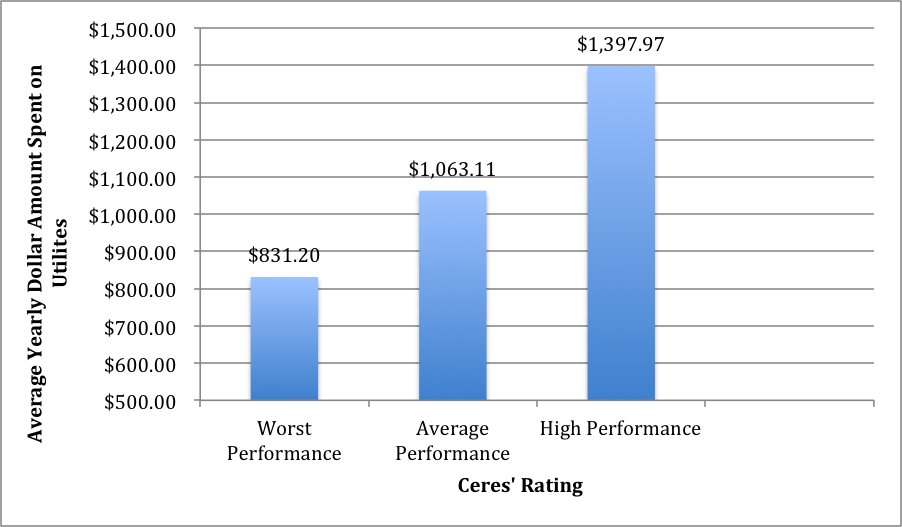 These numbers don’t even account for regional differences in electricity use that could mean an even greater increase in cost for customers since many of the Ceres’ lowest rated utilities are located in the Southern United States where states have not pursued aggressive renewable energy policies and electricity usage is much higher than elsewhere due to hot weather.[9]

For example, if Entergy subsidiaries in Louisiana were to bring their average cost of 6.83 cents per kWh up to 12.90 cents per kWh[10], which is the average cost of the best performers on the list, this would have a more dramatic effect on consumers because the yearly electricity consumption in Louisiana is highest in the country at 15,045.94 kWh.[11] This change would nearly double consumer cost from $1,027.64 per year to $1,940.93. Not only are the price increases much more dramatic, they would also impact many of the poorest states. Louisiana, along with many of the other Southern states who would have the largest increase in electricity prices, is among the poorest states in the country. Louisiana’s median household income was the third lowest in the United States at $40,660, compared to the national average of $52, 142.[12] It is unfair to ask the poor to subsidize wealthy Wall Street investors without providing any direct benefits.

Green groups such as Ceres are not concerned about the amount of money middle and lower income families have to pay for the electricity they need to keep the lights on and the air conditioning running on hot days. Instead of looking for ways to reduce the cost of electricity, Ceres advocates a plan that results in higher electricity rates. Following Ceres suggestions might be good for some wealthy Wall Street investors, but it will cost the families on Main Street.

According to Ceres: Highly Rated

According to Ceres: Average Utilities

According to Ceres: Worst Rated Utilities

[5] Ceres, Our Vision for a Sustainable Global Economy, http://www.ceres.org/about-us/what-we-do

[7] Energy Information Administration, How much electricity does an American home use?, http://www.eia.gov/tools/faqs/faq.cfm?id=97&t=3

Germany's Electricity Market Out of Balance