Can Ernie Moniz help the Department of Energy (DOE) to pick winning technologies? The agency has not fared well during the Obama Administration in dishing out loans and loan guarantees, losing taxpayer money not only to solar manufacturing companies like Solyndra, but to electric car makers as well. Fisker Automotive wanted to start small, but DOE convinced the company to broaden its horizons and open factories here in the United States, supplying the company with even more funds than the company had originally requested. Fisker Automotive is a Finnish company that made a very expensive electric automobile which only the rich could afford to buy even though its purchasers received a very lucrative tax credit from the federal government. So, the American taxpayer paid at least twice—once in lost loan guarantees and second to tax credits. 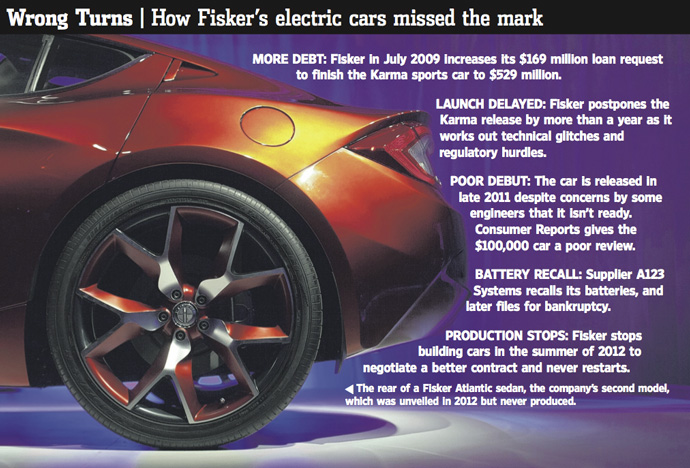 Fisker Automotive got its start in 2007, when its co-founder, Henrik Fisker, a highly regarded Danish designer of luxury automobiles, developed the idea and lured investors with a hand-sculpted clay model of his dream car. In 2008, Fisker unveiled a concept car for the Karma at the North American International Auto Show. Karma is a plug-in hybrid that could travel an estimated 50 miles on battery power before a gasoline engine kicks in to generate additional electricity.[i]

The company — having raised more than $1 billion from highly regarded Silicon Valley venture funds — found its biggest single investor in the United States Government. In 2009, the Obama administration granted Fisker Automotive loans totaling $529 million, which was more than the loan of $169 million that the company had initially requested, and a large enough amount to encourage private backers to provide more funds. At one point, the company was valued at $1.8 billion.[ii]

DOE granted the larger loan amount once Fisker agreed to build in the United States. Its first factory was in Anaheim, California. DOE indicated that it would fund the development of the Karma, an electric sedan costing over $100,000, and the company’s proposed second, less expensive model. In late 2009, Vice President Joe Biden announced that the less expensive model, a $60,000 sedan, was to be built in his hometown, Wilmington, Delaware where Fisker purchased a shuttered General Motors Company assembly plant with 3.2 million square feet, 142 acres and its own power and water treatment plants for $18 million.[iii] But the company failed before the plant was completed and the second model was started.

In September 2009, DOE gave preliminary approval for the $529 million in loans. In April 2010, Fisker started receiving payments on the loan and had been making repayments on the loan interest before its financial woes started. Fisker’s goal was to produce at least 11,000 Karmas by late 2011 and at least 75,000 Ninas by 2012. More than two-thirds of the loan amount was for plans to manufacture a plug-in hybrid car at the former GM plant in Delaware.[iv]

The company’s business model was to design an attractive sports car and then purchase off-the-shelf parts from suppliers. However, some of those parts had to be custom-made to fit the design vision, which resulted in higher prices, and others were delivered late, some of which were faulty.

Thus, Fisker had plenty of problems that added months to the Karma’s release, including troubles with suppliers and regulatory requirements, and problems with the software that ran the Karma’s display screens and phone connections. Due to delays in rolling out the Karma model, in June 2011, DOE froze disbursements to Fisker after paying out $192 million.[v]  But, newly released documents show that DOE was warned much earlier in 2010 that Fisker was not meeting milestones that had been set up for the loan, nearly a year before U.S. officials froze the financing after questions were raised about the company’s statements.

Even after DOE froze the disbursements in 2011, Fisker continued to order parts to build more Karmas, piling up the costs while struggling with the software and other problems. In the fall of 2011, A123 Systems, Inc., Fisker’s battery supplier and another DOE loan recipient, was informed that Fisker had run out of cash and would not be able to receive deliveries.[vi]

In the spring of 2012, Consumer Reports gave the Karma a failing grade after the car died as it was being tested and had to be hauled away on a flatbed truck. According to Tom Mutchler, “This is the first time in memory that we have had a car that is undriveable before it has finished our check-in process.”  The poor rating from Consumer Reports was followed by A123 Systems declaring bankruptcy and Hurricane Sandy flooding 338 Fisker automobiles in storage in New Jersey.[vii]

To date, Fisker has sold approximately 2,000 Karmas worldwide.[viii] In July 2012, Fisker stopped production of the Karma and has not built a car since. In August 2012, Fisker recalled its cars (a second recall) to fix a cooling system flaw linked to battery fires.

Fisker’s problem was also that Americans were not buying many electric vehicles. In 2012, consumers bought 48,000 all-electric and plug-in electric models, a fraction of the 14.5 million vehicles sold in the United States, according to the auto research site Edmunds.com. According to Edmunds, less than 900 of those sold were Karmas.

Fisker tried to get 2 Chinese firms to purchase the company, but that endeavor failed. The Chinese balked at the U.S. loan because they did not want to be compelled to build cars at the Delaware plant, which is big, old, and expensive.[ix] (A Chinese company was successful, however, in purchasing Fisker’s battery maker A123, now renamed “B456.”) Fisker is now looking into a bankruptcy restructuring where the United States could end up owning all or part of the company’s assets because its loans were backed by Fisker assets. Earlier this month, the United States seized $21 million from Fisker in anticipation of a default. According to DOE, a $10 million payment was due on April 22, which Fisker missed.[x] This month Fisker laid off 160 employees without severance benefits.

According to House Energy and Commerce Committee Chairman Fred Upton and Oversight and Investigations Subcommittee Chairman Tim Murphy, “Fisker’s troubles are a sad reminder of the Department of Energy’s loan failures. The jobs we were promised never materialized. Thankfully, because of our aggressive oversight work and the problems we uncovered with the DOE loan program’s office, the administration stopped sending the checks to Fisker when it became clear the company was in trouble. While we are pleased to see DOE taking action to protect taxpayer dollars, we remain concerned whether this loan was approved in the best interests of taxpayers. This deal has been plagued with problems and the question remains: should Fisker have received the half billion dollar loan in the first place?”[xi]

For Karma owners, it is a tough lesson because there may be no company to service the vehicle down the road. For taxpayers, the potential loss of $171 million would be the largest loss of federal loan money since the 2011 failure of Solyndra, a solar panel manufacturer. Solyndra collapsed despite receiving $528 million from DOE, triggering criticism of the Obama administration’s green energy program. Many other companies are also in trouble. (For a list, click here.)[xii]

In this complex world, it is difficult to pick winners and losers and the government has a poor track record at doing so, if for no other reason than because politics gets injected into the process.  The federal government should leave it up to the market place where the track record is better, and if the endeavor fails, taxpayer money is not lost.

Climate Change Madness: Do the Europeans know what they are doing?