To meet a legislated goal of carbon emissions-free electricity by 2040, New York State needs up to 45 gigawatts of dispatchable (available upon demand) emissions-free resources (DEFRs), which is more than the state’s total current utility-scale generating capacity of 39 gigawatts. DEFRs are like wind and solar in that they are “carbon-free” as generating sources, but unlike wind and solar, they are not intermittent. DEFRs do not currently exist and probably will not exist in the next decade. Examples of DEFRs are hydrogen, renewable natural gas, modular nuclear power, and batteries. These are either aspirational, or in the case of batteries, extremely expensive—costs that will be included in N.Y. consumer electricity bills. According to the report 2021 – 2040 System & Resource Outlook from the New York Independent System Operator (NYISO), as New York tries to transform its grid to zero-emission electricity production by 2040, it will face three serious problems: a need for an unprecedentedly rapid buildout of wind and solar power; a critical reliance on energy sources that are not yet economically viable; and severe transmission congestion.

Besides the technology not being available, New York currently generates over 50 percent of its electricity using natural gas, which means that natural gas generation needs to be replaced and future demand growth needs to be fulfilled to meet the carbon emissions free goal by 2040. Natural gas generated about 7,300 thousand megawatt hours of the roughly 12,553 thousand megawatt hours of power on its grid in August, more than 58 percent of the state’s power consumption. Meanwhile, non-hydroelectric renewable energy (wind, solar, and biomass) provided 594 megawatts—less than 5 percent, nuclear provided 18.3 percent and hydropower provided 17.8 percent.  New York’s electricity system has been blessed by the foresight that established significant hydropower that environmentalists now oppose. 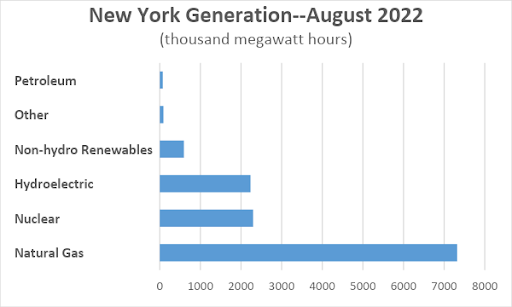 Because more people will be driving electric cars due to prohibitions on the sale of internal combustion engines and more buildings will be heated with electricity, installed electric generation capacity has to more than double in the next 18 years, to between 111 and 124 gigawatts to meet demand. Natural gas plants constitute about half of current capacity, and because they are required to shut down under these edicts, the New York system operator predicts that about 95 gigawatts of new – emission-free – energy production must be built in only 18 years. And at least 20 gigawatts of that needs to be built in the next seven years. By way of comparison, in the last 23 years only 13 gigawatts of energy production have been installed, and over the past five years only 2.6 gigawatts. Much of this capacity was wind and solar power—technologies requiring backup. Meanwhile, in those five years, 4.8 gigawatts of generation has been shuttered, for a net loss of over 2 gigawatts of generating capacity.

Offshore wind projects, which are currently expensive and are increasing in cost due to inflation and supply chain shortages, are slated for development off Long Island, but the transmission capability does not exist to send that electricity to where it is most needed. Offshore wind is a major component of New York’s zero-emission electricity goal and lack of transmission capacity is a critical roadblock to meeting the state’s goals. New York will have to invest in costly transmission capacity, which is time-consuming to plan, permit and build, particularly since no one wants the towers and lines in their backyards.  These costs also will be reflected in utility bills for residents and businesses in New York.

If the state does not dramatically speed up the pace of bringing emission-free resources and transmission capacity online and keeps to its plan to shutter natural gas plants, demand for electricity will eventually outstrip supply. That would lead to blackouts, most likely during exceptionally hot or cold weather. Hundreds or more people could die from being exposed to extreme temperatures or losing power to their medical equipment. As always, these deaths would be concentrated among the elderly, the sick, and the poor.

New York City Mayor Eric Adams recently issued an announcement about a new, $4 billion plan to make all of New York City’s schools “all electric.” The plan, which has to be debt-funded, would be retrofitting about 100 public schools that currently use either natural gas or fuel oil for heating with electricity. Thus, the all-electric schools will actually be over 50 percent natural gas schools since natural gas currently generates over 50 percent of the state’s electricity.

The debt to pay for the $4 billion in spending will increase utility bills for all New Yorkers. The added power demand means more natural gas will need to be imported from other states since New York has banned drilling for natural gas in its state or, LNG will need to be imported from other countries since New York has also outlawed the building of new natural gas pipelines across its borders. Furthermore, since Adams also said that all new schools built in the city will use only electricity, the demand for electricity and thus natural gas will keep increasing substantially.

To meet New York’s goal of emission-free electricity by 2040, a substantial amount of electricity would need to come from sources that are dispatchable on demand, yet emission-free, called DEFRs (dispatchable emissions-free resources). Because wind and solar need the sun to shine and the wind to blow, they cannot be the sole technologies to meet New York’s goal and thus are not DEFRs. None of the politically correct sources that do qualify as DEFRs are commercially or economically viable yet. Batteries, in particular, are unlikely to fulfill a need for multiple days of energy delivery during extended periods of low wind and solar production. If the state rushes into premature retirement of natural gas plants, consumer energy costs could skyrocket and blackouts could occur.

New York at least has identified the need for DEFRs. President Biden seems to believe that solar, wind and batteries with a smattering of hydrogen can accomplish the same goal and more quickly than New York since he envisions a national carbon-free electricity grid by 2035. That is unlikely to happen without blackouts and skyrocketing electricity prices, bringing the United States to a third-world power in lifestyle and national security.

Conference of the Parties (COP27) Has Begun in Egypt