On June 1, 2018, China, the world’s largest solar market, announced changes to its subsidies for solar power, causing estimates of its future solar construction to be slashed. China will terminate approvals for new subsidized utility-scale photovoltaic power stations in 2018. The country will also reduce its feed-in tariff for projects by RMB 0.05 per kilowatt-hour ($0.0078—less than one U.S. cent), limit the size of distributed projects to 10 gigawatts (from 19 gigawatts), and mandate that utility-scale projects go through auctions to set power prices. Projects connected to the grid after June 1 will not receive feed-in tariffs. The changes to China’s solar subsidies are expected to lower its future solar capacity additions by about 20 gigawatts or up to 40 percent. These changes are expected to reduce China’s solar capacity forecast to between 28.8 gigawatts and 35 gigawatts, depending on the forecaster.

China became the world’s leader in solar capacity three years ago. In 2017, it accounted for nearly 54 percent of global photovoltaic installations with subsidy costs totaling RMB 100 billion (about $16 billion). China is in arrears regarding those subsidies, which is the reason for the need to cut them along with its desire to reduce electricity prices by 10 percent. One forecaster (Wood Mackenzie) estimated that the subsidies could reach RMB 250 billion (about $40 billion) by 2020 if China took no action. 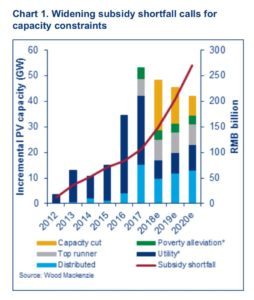 China spent $132.6 billion on renewable energy technologies in 2017, with most of that money, $86.5 billion, spent on solar. It is estimated that China installed 53 gigawatts of photovoltaic solar capacity in 2017, about 20 more gigawatts than originally projected. That increased China’s solar power generation by 64 percent to over 35 billion kilowatt-hours in the first quarter of 2018. China is the world’s largest renewable energy generator. According to its five-year plan, China plans to produce 27 percent of its energy from renewable sources by 2020.

Despite the investment in solar energy, the country has not been able to determine a mechanism to collect the subsidies. Chinese state-owned developers and investors had continued building renewables assuming the government will find a way to pay the subsidies owed them. China first tried to control the solar boom by curbing utility-scale projects built outside of allocated quotas. Despite this initial limitation on solar construction, energy-intensive companies continued building solar in industrial parks to cover some of their own demand and reduce their operating costs.

Chinese solar panel manufacturers urged the Chinese government to delay the subsidy cuts and relax the cap on new projects because the new policy will damage the industry, which is struggling financially. Executives from 11 Chinese solar firms said the announcement to withdraw support had come far too soon. The producers said the sector had racked up huge debts to ensure it could compete with traditional power generators and needed another three to five years of government support.

Some countries such as Spain began cutting their renewable subsidies as early as 2010. Other countries that have reduced their subsidies or mandates include Bulgaria, the Czech Republic, Germany, Greece, Italy, Netherlands, and the United Kingdom. Bulgaria, Greece, and Spain made retroactive cuts to their feed-in-tariffs.

Germany cut feed-in tariff subsidies by 75 percent for new rooftop solar installations because non-solar customers were subsidizing solar customers and other renewable generation. Germany also levied grid fees on residential solar owners to update and expand grid infrastructure, both for transmission lines and distribution grids, as well as for smart metering and technologies to support advanced strategies such as virtual power plants.

In 2015, the UK government suspended all new subsidies for onshore wind farms and reduced subsidies for residential solar installations, resulting in a drop in investment in both 2016 and 2017.

It is expected that the reduced solar demand in China will lead to an oversupply in the global market. One forecaster projects the solar panel oversupply in 2018 to be 34 gigawatts, which will push prices down 32 to 36 percent. That will bring down installation costs for new solar projects, particularly large, utility-scale systems, and spur new investment in other countries like the United States, which still subsidizes and mandates renewable electricity. However, the new investment is unlikely to make up for the reduction in China’s solar industry. Further, unless solar suppliers slow down their manufacturing investments, the oversupply problem could extend beyond 2018.

The costs of the subsidies that the Chinese government provides to the renewable energy industry have been growing at an unsustainable rate. Further, some of China’s solar producers have had to curtail their output because their generating capacity has grown faster than the nation’s grid capacity. That has made China join other countries that have already reduced or curtailed their solar subsidies due to high residential electricity prices and unfairly charging non-solar customers to subsidize solar customers. Reducing solar subsidies will slow the growth of solar generation both in China and worldwide.