The U.S. solar manufacturing industry employed about 32,000 workers in 2014—just a tiny portion of the more than 12 million domestic manufacturing jobs in the United States. China accounted for almost 70 percent of the world’s solar module manufacturing in 2013 and many manufacturers are expanding their activities to countries such as Malaysia, the Philippines, and Mexico. Ten firms control nearly half of the solar module production worldwide–six are in China, two in Japan, one in South Korea, and one in the United States. Overcapacity has caused the price of solar modules to decline by 65 to 70 percent since 2009 causing many U.S. firms to enter bankruptcy, close their U.S. operations, or reassess their business models.[i]

At the end of 2013, the number of U.S. grid-connected photovoltaic (PV) systems totaled over 445,000—more than double the number at the end of 2011. The PV modules are either imported or manufactured by around 75 manufacturing facilities in the United States. Most U.S. module production occurs in California, Ohio, Oregon, Texas, and Washington.

The U.S. market for PV systems has grown recently, accounting for about 12 percent of global installations in 2013, with almost 5 gigawatts of capacity. Of the new installations during 2013, 60 percent consisted of utility-scale installations, 23 percent for non-residential customers, and 17 percent for residential buildings. 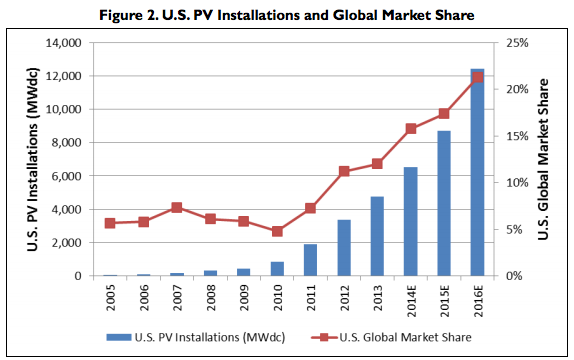 Government support has been instrumental in the growth of the solar industry worldwide. In the United States, the solar industry has been aided by tax incentives and stimulus funding. The investment tax credit for solar is currently 30 percent, but drops to a permanent 10 percent credit for commercial investments at the end of 2016 and will expire for residential investments. For example, a $40,000 system would cost the owner $28,000, because the federal government reduces the owner’s tax obligations by $12,000 in the year it is deployed. ($40,000 x 30% credit = $12,000) In 2012, the United States imposed duties on Chinese solar product imports to help the U.S. solar manufacturing industry. Nonetheless, the following facilities were closed in the United States—a large number of them operated for less than 5 years and many of them received stimulus funding. 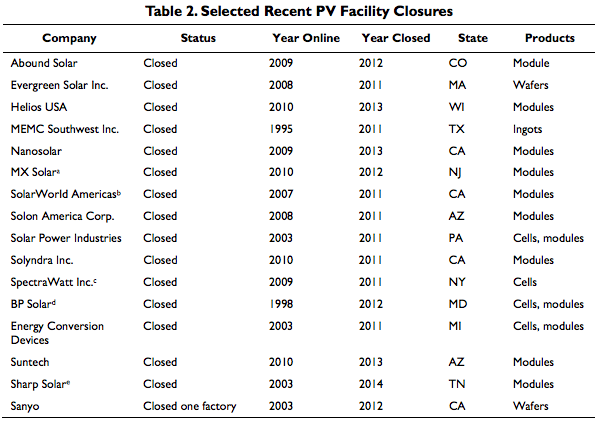 According to the U.S. solar industry, the U.S. solar manufacturing sector employed 32,490 workers in 2014—about 20 percent of all U.S. employment related to the solar energy sector. The remainder of the 141,317 full-time employees in the solar power industry as of November 2014 were involved in installation, sales and distribution, project development, research and development, and finance. According to the U.S. Energy Information Administration, however, the number of full-time employees in the U.S. PV industry was 12,575 in 2012. 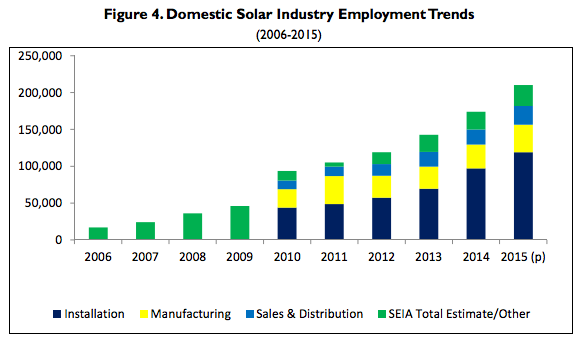 The U.S. government has provided a number of incentives to encourage solar manufacturing and solar electricity generation. Some of these incentives have expired. The incentives include: an advanced solar manufacturing credit (that reached its funding cap in 2010), the section 1705 loan guarantee program that funded facilities with “new or significantly improved” technologies (expired in 2011), an investment tax credit of 30 percent that expires at the end of 2016, the section 1603 Treasury Cash Grant Program that expired at the end of 2011, and the Department of Energy’s “Sunshot Initiative” that has several individual initiatives to support solar manufacturing.

The Advanced Energy Manufacturing Credit was included in the American Recovery and Reinvestment Act of 2009 (popularly known as “the Stimulus.”) It provided a 30 percent tax credit to advanced energy manufacturers that built qualified facilities in the United States. Facilities receiving the credit had to begin operation by February 17, 2013. By 2010 when the program reached its $2.3 billion cap, the program had funded 183 projects including solar module manufacturing projects. The Obama Administration requested another $5 billion for this program, but Congress has not allocated the money.

The Section 1705 loan guarantee program was established by the Stimulus, providing loan guarantees to renewable energy projects. The 16 solar projects, of which four were solar manufacturing projects, accounted for over 80 percent of the loan guarantees, totaling $13.27 billion. Three of the approved manufacturing projects failed. Solyndra declared bankruptcy in 2011 and defaulted on its $535 million loan; Abound Solar closed its operation and filed for bankruptcy in 2012 after receiving $70 million of its $400 million loan; and SoloPower did not meet the requirements to obtain its $197 million loan guarantee. The fourth firm, 1366 Technologies, received a $150 million guarantee and is still operating. The section 1705 program expired on September 30, 2011.

The Investment Tax Credit for solar was adopted by the Energy Tax Act of 1978 and has been available since that time. The current tax credit allows 30 percent of a solar system’s cost to be deducted as a tax credit. This credit expires at the end of 2016 when it becomes a permanent 10 percent tax credit for commercial facilities and zero for residential facilities. In 2009, the program was modified to allow a direct cash grant in lieu of the tax credit for qualified facilities.

The Section 1603 Treasury Grant Program allows renewable energy owners to obtain cash grants to cover 30 percent of the systems’ cost, which is a more favorable option than a tax credit. The program awarded grants to over 95,000 solar projects, totaling $7.3 billion through October 15, 2014. The program expired at the end of 2011.

The U.S. Department of Energy has a number of programs under the “Sunshot Initiative” to support solar manufacturing in order to reach the Department’s goals of 14 percent of electricity generation supplied by solar energy by 2030 and 27 percent by 2050.

The solar manufacturing industry has entered a phase of global consolidation. According to the solar industry, the number of module manufacturing facilities in the United States dropped by 13 in 2 years—from 51 in 2011 to 38 in 2013. Module production in China is relatively flat because of declining demand in some countries and weakened prices. The number of PV module manufacturers in China has dropped by over 200 in 2 years—from 300 in 2011 to less than 100 in 2013. China expects to reduce the number to 10 by the end of 2017 with those 10 manufacturers supplying 70 to 80 percent of domestic demand.

In 2013, China produced about two-thirds of the world’s solar modules and exported around 16.7 gigawatts, totaling around $10 billion. China’s domestic market is small; in 2013 it had 19 gigawatts of total capacity—a sizable increase from its market in 2010 of less than 1 gigawatt. China encouraged solar with policies, including grants for solar PV installation and a national feed-in tariff. 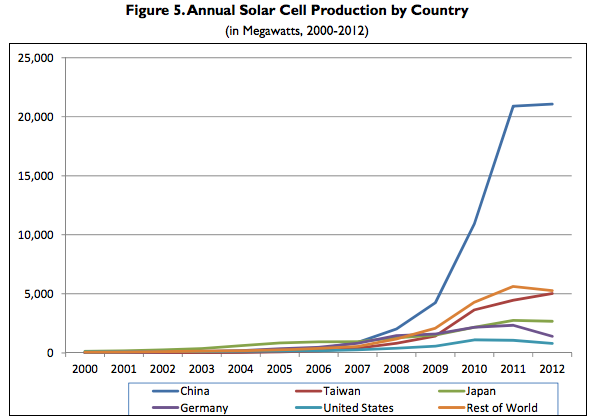 The majority of PV modules are manufactured in China. While there are still firms manufacturing solar panels in the United States, employment in the solar manufacturing industry has stagnated and will remain limited in the near term due to competition abroad and weakening demand in some countries. The United States has provided a variety of incentives to the solar manufacturing industry, but these incentives have failed to achieve dominance in this area by U.S. firms and many of the firms that received incentives have either closed, filed for bankruptcy, or reassessed their business plans.

No, Now Is NOT a Good Time to Raise the Gas Tax

Russia Uses Devious Means to Rid the U.S. of Domestic Oil and Gas