Pacific Gas and Electric will shutter its two Diablo Canyon nuclear units in 2024 and 2025, respectively, when their current operating licenses are set to expire or need to be renewed by the Nuclear Regulatory Commission (NRC).[i] Despite the NRC indicating that these units are well run and among the best in the country, and the utility indicating that they are able to withstand earthquakes, tsunamis and flooding, Pacific Gas and Electric will shutter them and replace them with renewable energy and efficiency programs.

Diablo Canyon produces 9 percent of California’s electricity and 20 percent of Pacific Gas and Electric’s power, which is a lot of power to be replaced by solar and wind units that are not controllable by the system operator. While Pacific Gas and Electric expects its demand to be less when it shutters these units because of California’s law to double energy efficiency by 2030, it is unclear that consumers will demand less even though rooftop solar systems are booming in California, and decreasing demand for the company’s power.[ii]

Another reason given for shuttering these plants is that California’s renewable portfolio standard requires that 50 percent of its electricity generation to come from renewable sources by 2030. However, many doubt that the state’s electricity grid can be run with that much intermittent energy from wind and solar power. If that is the case, more natural gas power will be needed, which will increase greenhouse gas emissions in the state, at least in the short-term when the Diablo Canyon units first retire.

Further, Californians will pay dearly. Decommissioning Diablo Canyon is expected to cost $3.8 billion and replacing all its power with solar energy, for example, could cost $15 billion based on current prices.[iii]

When the wind is not blowing and the sun is not shining, the California Independent System Operator must have an available source of electricity to prevent outages. Generally, natural gas plants have been used to back-up wind and solar power, which means they need to operate at the same time as the renewable plants so that their power can be turned up when needed. (Gas plants can take between four and eight hours to restart, once they are turned off.) As more renewable energy comes online, operating renewable energy, natural gas and other power sources together can create more power than needed, at which point the California Independent System Operator has to switch off solar power to avoid overloading the grid as it needed to on a day in March. (See graph below.)

TOO MUCH RENEWABLE POWER

On a sunny day in March, some solar farms had to shut down because there was more power on the grid than Californians were using. 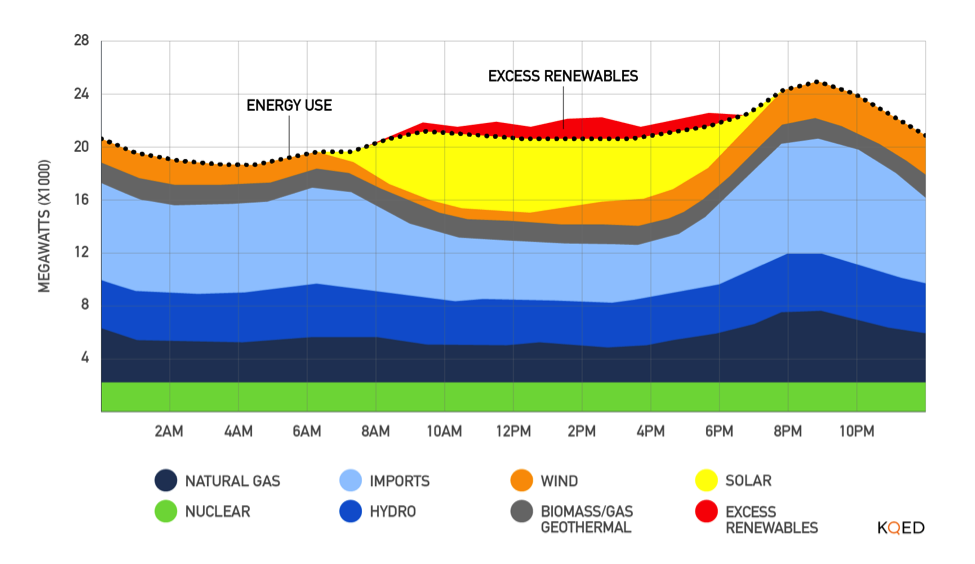 Other Alternates May Be Needed

California is considering joining its electric grid to other Western states so electricity can be shared more efficiently and then hypothetically the state could purchase renewable energy from other states instead of operating additional natural gas plants. However, since all electrons are the same, it just may be purchasing fossil or nuclear energy. For example, Southern California gets electricity from Arizona’s Palo Verde nuclear plant due to its utilities’ being part owners.

The state is also considering energy storage, such as large batteries, to provide back-up power to balance out solar and wind without relying on as much natural gas generation. However, this alternative is expensive and not yet commercially viable.

Almost every time that a nuclear plant has been closed, its energy production has been replaced almost entirely with fossil fuels. When the San Onofre nuclear plant closed in California, the replacement power was provided by natural gas. Some have estimated that the carbon dioxide emissions from the replacement power are equivalent to putting two million cars on the road. A study by PIRA estimates that natural gas consumption could increase by 34 percent in northern California between 2023 and 2026 when Diablo Canyon is shuttered despite the company’s renewable energy and efficiency goals.[iv]

With the San Onofre retirement, California gets almost 60 percent of its electricity from natural gas, compared to 45 percent in 2011, and has to store it because its daily pipeline capacity is insufficient to meet demand. When a leak occurred in a natural gas storage plant last October, state officials warned that there may be power failures this summer. With Diablo Canyon also closing, California’s dependence on natural gas is likely to become even higher.

Only California would consider closing a perfectly good nuclear plant that emits no carbon dioxide emissions and replace it with intermittent renewable energy that needs back-up power from a flexible fossil fuel such as natural gas. California’s laws to get 50 percent of its electricity from renewable energy and to double its energy efficiency–both by 2030–are driving these decisions that will prove costly for electricity consumers in the state.

Arctic Safety Rule Has Nothing To Do With Safety

Why the Social Cost of Carbon is a Dubious Policymaking Tool