Electric utilities are constructing expensive and inefficient solar plants because of subsidies and mandates from federal and state governments. The subsidies are not free–they come from the American taxpayer. And once the subsidies expire, consumers will pay higher electricity rates. So, either as taxpayers or as consumers, the American public is paying for these facilities. Ultimately, this means that the American economy is paying premium prices for a basic product essential for economic growth and competitiveness—electricity.

North Carolina. Western North Carolina is home to a new 555-kilowatt solar array that has been placed atop a landfill.[i] This small solar farm—built in response to bids for projects that would meet North Carolina’s Renewable Electricity Standard—is the fourth to begin operating in the state, with four more under contract. [ii] FLS Energy owns and operates the solar farm and will sell its power to Progress Energy Inc. The solar plant consists of 2,340 photovoltaic panels and is expected to generate about 730,000 kilowatt-hours of electricity annually, only a 15-percent capacity factor.  It is reported to have created five new jobs. Unfortunately, to provide counterweight against high winds and support on the ground, FLS Energy had to construct concrete pads on top of the landfill as a base for the solar panels, creating carbon dioxide emissions and partially negating some of the environmental benefit from the solar generated electricity. 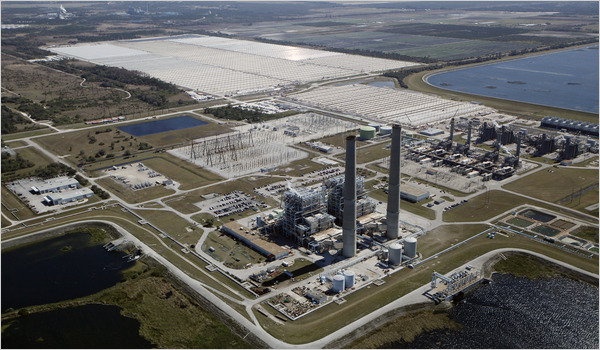 Across 500 acres north of West Palm Beach, the FPL Group utility is grafting what will be the world’s second-largest solar plant onto the back of the largest fossil-fuel power plant in the United States. (NYT)

Florida. The N.C. plants are smaller than the solar plant that came on line last fall in southern Florida. That plant consisting of over 90,500 photovoltaic panels is a 25,000 kilowatt plant, built by Florida Power and Light.[iii] The plant costs more than $6,000 per kilowatt to construct, about 6 times what a natural gas combined cycle plant would cost, according to the Energy Information Administration (EIA), an independent agency within the U.S. Department of Energy.[iv]

Florida Power and Light is building another solar plant in Indiantown, Florida, which is an experiment of marrying a solar plant with a gas-fired plant to reduce cost.[v] Florida Power and Light expects to cut cost by about 20 percent compared with a stand-alone solar facility since it does not have to build a new steam turbine or new high-power transmission lines. Once totally completed, the solar plant will be able to generate 75,000 kilowatts of power using 190,000 mirrors, tripling the size of the Florida plant described above. But it is dwarfed by the adjacent gas plant, which can produce about 3,800 megawatts of power. As you can see by the picture below, the more efficient natural gas plant also requires far less land mass than the solar plant. At a cost of $476 million, it will cost $6, 347 per kilowatt to construct.

These solar plants and other renewable generating plants are being constructed in response to subsidies and grants from the federal and state governments and because of state mandates called Renewable Electricity Standards or Renewable Portfolio Standards.  Over half of the states and the District of Columbia have enacted Renewable Electricity Standards that require a specified percentage of future generation to be from renewable power.

What are the Costs of Competing Technologies?

The EIA provides the construction costs for a slate of generating technologies and their expected annual generating costs for 2016, the first year that they can be compared owing to the different construction times for each plant type. The construction costs, without finance charges,[vi] are depicted in the following graph. The capital costs (in 2008 dollars) range from $648 per kilowatt for a gas-fired turbine to $6,171 per kilowatt for a photovoltaic solar plant, the highest cost of all of the future generating technologies that EIA considers in its forecasts.  Coal and gas-fired plants generally dominate a forecast where current laws and regulations are assumed to continue in the future. A conventional coal plant with equipment for removing sulfur dioxide and nitrogen oxide emissions runs $2,223 per kilowatt and a coal-fired integrated gasification combined cycle plant runs $2,569 per kilowatt. Gas-fired combined cycle plants are of even lower cost at $968 per kilowatt. These technologies can be used as base-load plants that operate at high capacity factors when electricity demand is at its highest.

Many advocates of renewable technologies indicate that while the capital cost of so called “green technologies” may be higher than conventional fossil-fueled technologies, the benefit is zero fuel cost for their preferred technologies–solar and wind. While that is true, wind and solar technologies cannot provide base-load power because the sun is not always visible and the wind does not always blow, meaning the electricity may not be available when you need it. Taking into account these factors as well as operation and maintenance costs and fuel costs, EIA  puts their slate of future generating technologies on a comparable basis by calculating levelized cost, that is, the annual cost of generating power including capital, fuel, operation and maintenance, and finance charges.[vii] And, in the case of coal, they include the equivalent of a $15 per ton carbon dioxide emission fee to represent the current financial and regulatory environment for coal-fired plants. Many coal-fired plants are finding difficulty in getting financing and/or are facing regulatory or legal delays in obtaining permits.

Why Are Electric Utilities Building Wind and Solar Plants?

Subsidies and Mandates for Renewable Technologies

Electric utilities are building wind and solar plants because of incentives offered and mandates laid down by state and federal officials. These include subsidies in the form of investment tax credits, production tax credits, accelerated depreciation of the asset for tax purposes, and Renewable Electricity Standards (RES), which require electric utilities either to build a required amount of renewable power or to purchase credits from other electric utilities who more than meet the targeted requirements. Currently, twenty-eight states and the District of Columbia have renewable electricity standards.[viii] The RES specifications differ by state. North Carolina is the only state in the southeast with an RES. Many southern states are against a federal RES because they will have to purchase renewable credits from other areas of the country since they have very little “green” resources. Purchasing electricity credits will increase their electricity rates, possibly driving out industry from their states. While more than half the states have an RES, many are not monitoring its compliance, and, with the exception of Texas, are not meeting their renewable targets.[ix]

Solar power has had a 10-percent investment tax credit since 1978, which was made permanent by the Energy Policy Act of 1992. The Energy Policy Act of 2005 established a 30-percent personal tax credit, not to exceed $2,000, for the purchase of solar electric and solar water heating property. The Emergency Economic Stabilization Act of 2008 extended the 30-percent tax credit to 2016 and lifted the   cap. It also allowed electric utilities to qualify, paving the way for electric utilities to begin constructing solar thermal and solar photovoltaic facilities.

Wind received a federal production tax credit (PTC) as part of the Energy Policy Act of 1992, defined as a 1.5-cents-per-kilowatt-hour payment (adjusted annually for inflation), available for 10 years to investors for facilities placed in service between 1994 and June 30, 1999. The PTC for wind has expired and been reinstated several times since its origination. The Emergency Economic Stabilization Act of 2008   extended the PTC to 2.1-cents-per-kilowatt-hour through 2012. The $787 billion economic stimulus that President Obama signed into law in February 2009 makes a 30 percent investment tax credit available in lieu of the production credit.

Federal Subsidies for Renewable Power Compared to Other Generating Technologies

While these are some of the more direct subsidies that wind and solar receive, there are many others at both the federal and state level, such as the accelerated depreciation mentioned above. The EIA did a study comparing the federal subsidies received for electric generation by fuel type for fiscal year 2007.[x] They found that wind and solar received almost 100 times more in subsidies than oil and natural gas plants on an electricity production basis.  Total federal subsidies for electric production from wind power were $23.37 per megawatt hour (in 2007 dollars) and for solar power were $24.34 per megawatt hour, compared to 44 cents for traditional coal, 25 cents for natural gas and petroleum liquids, 67 cents for hydroelectric power, and $1.59 for nuclear. These subsidies include the federal production and investment tax credits, but do not include accelerated depreciation (a five-year tax write-off) and state subsidies. Energy subsidies are paid for by consumers and tax payers; they are not free.

Government is intended to work for the people. However, governments have expanded their influence to many areas of our lives where the rationale for action is suspect, even nonexistent. Arguments such as “energy independence from OPEC oil” make no sense when evaluating options for the electricity sector because this fuel generates only 1 percent of U.S. electricity, and this small quantity could be easily replaced if it were economical to do so.

Some people believe that “green energy” will create jobs that will stimulate the economy. But case studies from Spain,[xiii] Germany,[xiv] and Denmark[xv] have shown just the opposite. Early on, Spain embarked on a program of “20-percent renewable by 2010,” to set an example for other countries. However, a Spanish study has found that for every green job the Spanish government created, 2.2 jobs were destroyed elsewhere in the economy, and 9 out of 10 government-created green jobs were temporary. The phrase “20 percent by 2010” turned out to be a close approximation of Spain’s unemployment rate.[xvi]

So why are our politicians continuing to subsidize and mandate inefficient and expensive sources of energy? Doing so only increases taxes (to pay for the subsidies) and increases the price of energy. It’s a lose-lose proposition.

[xiv] Economic impacts from the promotion of renewable energies: The German experience, https://www.instituteforenergyresearch.org/germany/Germany_Study_-_FINAL.pdf

Energy efficiency is great, but we have to ask at what cost?