A recent report proclaimed that solar power will reach “grid parity” in most of the United States by 2016. Referencing a Deutsche Bank report, Bloomberg announced that if the investment tax credit (ITC) of 30 percent is extended beyond 2016, solar energy in 47 states would achieve price parity with electricity from conventional sources in 2016.

The results of the report, as well as the media coverage about its results, are inherently misleading. Focusing on grid parity as an indicator of solar’s ability to replace electricity generated by natural gas, coal, and nuclear power distracts from the fundamental limitations of solar energy. In short, solar panels still cannot replace reliable sources of electricity because we need electricity all the time—not just when the sun is shining.

What is Grid Parity?

Alternative energy sources achieve “grid parity” when their electricity can be purchased for the same amount of money as electricity from conventional sources. The National Renewable Energy Laboratory defines grid parity as the break-even cost of an alternative energy source, “where the cost of PV [photovoltaic]-generated electricity equals the cost of electricity purchased from the grid.”[1] Similarly, another study analyzing the levelized cost of electricity for solar photovoltaic considers grid parity to be “when the LCOE of solar PV is comparable with grid electrical prices of conventional technologies and is the industry target for cost-effectiveness.”[2]

Why Grid Parity is Insufficient

Nevertheless, applying the term “grid parity” to intermittent sources tells less than half of the story. This is because of how the electric grid works. Electricity supply must meet electricity demand 24 hours a day, 7 days a week, 365 days a year, or blackouts or brownouts ensue. It is therefore, very important to have electricity sources that are reliable or can follow the changes in demand. But solar obviously does not do that.

“Since load must be balanced on a continuous basis, units whose output can be varied to follow demand (dispatchable technologies) generally have more value to a system than less flexible units (non-dispatchable technologies), or those whose operation is tied to the availability of an intermittent resource. The LCOE values for dispatchable and nondispatchable [sic] technologies are listed separately in the tables, because caution should be used when comparing them to one another.”[3] [emphasis added]

As a result, a more accurate comparison between solar energy and conventional sources would include the cost of backup power in price estimates.

Even if solar achieves a break-even cost with conventional sources, grid parity is only part of what is needed for an alternative source to be a true contributor on the grid. Conventional sources typically fulfill a certain generator role on the electricity grid. Baseload plants, such as coal and nuclear, continuously supply the grid with power but do not efficiently increase or decrease their electricity production.[4] Intermediate load plants like combined cycle natural gas plants ramp up and down to meet the daily rises and falls in demand.[5] Peak load plants increase or decrease their output quickly in order to meet demand when it is highest.[6] The following graph illustrates how different types of power plants meet electricity demand throughout an average day:[7] 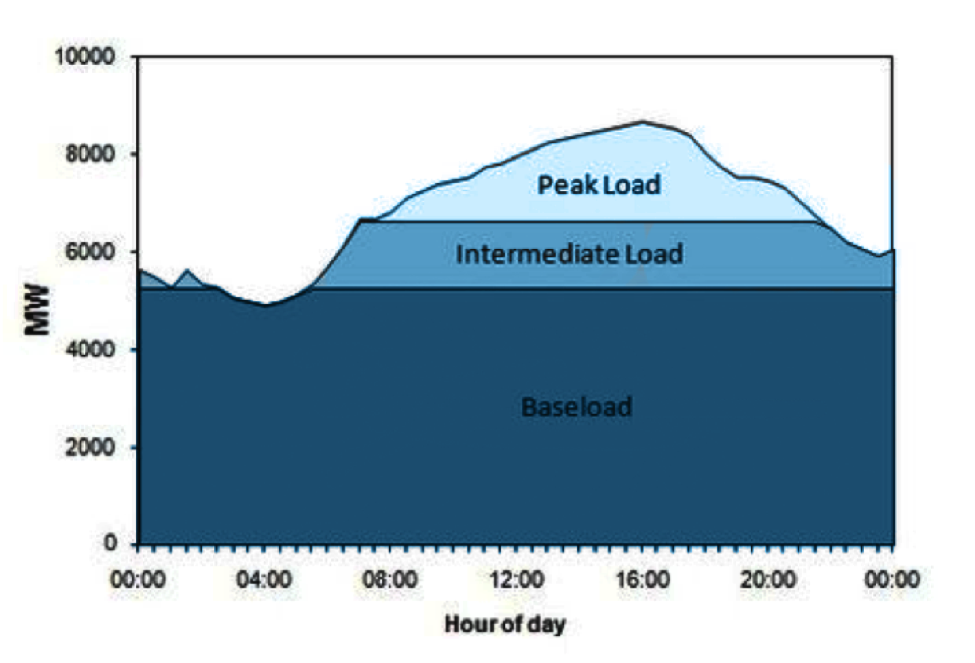 Due to its variability and inability to scale up or down, solar does not effectively fit any of the different generator roles.

In order to achieve true parity, an energy source should be functionally equivalent and not just cost-competitive with grid electricity prices. In particular, the ability to store energy and utilize it on demand is critical. Natural gas, coal, and nuclear power have an advantage over solar because they effectively store energy that can be released exactly when needed. Since there is still no widespread, effective method by which to store solar energy,[8] it is challenging to make an accurate comparison between solar prices and electricity prices from other sources.

The Bloomberg article argues that “solar-power generation will increasingly dominate” in the future because “it’s a technology, not a fuel.” [9] This is simplistic at best and misleading at worst. Natural gas is a fuel, but as with almost everything in life, technology is entwined with the exploration, production, and use of that fuel.

Sunshine may be free, but natural gas in the ground is free too. What matters is the costs of taking the fuel, be it sunshine or natural gas and converting it to energy for people to use when and where they want to use it. Even if solar power were free, by itself, it would not help keep the lights on at night for example.

Saying that natural gas is limited and therefore solar will win in the near future is also flawed thinking because of improvements in technology. For example, as oil exploration and production technologies have improved, proven oil reserves have more than doubled in the last 30 years.[10] Similarly, proven natural gas reserves have also grown, due to the expanded use of techniques like hydraulic fracturing and horizontal drilling.[11]

Assuming that “limited” resources such as natural gas, oil, and coal will automatically and significantly increase in cost is ignorance of history. Currently, the difficulty of storing solar energy appears to be a much bigger hurdle than the limits of natural resources. Ironically, BrightSource Energy’s new Ivanpah Solar Electric Generation Station is using more natural gas than anticipated for their auxiliary boilers.[12]

Solar technology will undoubtedly improve, but so will the technologies for finding, producing, and using other sources of energy such as natural gas. We don’t know what the future holds, but the reality is the future will be bright as long as people are free to choose the sources of energy they think best meet their needs.

Solar reached Parity in Australia in 2012

Australia provides an example of the outcome of grid parity. Even though solar energy purportedly reached grid parity in 2012, only 0.1 percent of the country’s total primary energy consumption is due to solar power.[13] A more recent comprehensive overview of Australia’s renewable energy sector by the Clean Energy Council assessed that only 1.62 percent of the country’s total electricity generation was produced by solar energy.[14]

Solar’s share of energy generation will likely increase over time. After all, according to the government of Australia, “the Australian continent has the highest solar radiation per square metre of any continent and consequently some of the best solar energy resource in the world.”[15] Even though Australia has great solar resources, achieving grid parity has not resulted in a huge shift to solar. Things can (and will change) but solar needs to move beyond a niche role in electricity generation and it will take more than grid parity to do that.

Grid parity sounds nice, but it does not mean that solar will play a large role in electricity generation. For the electricity grid, it is far more important to have on-demand power day or night than cheap power in the middle of the day. Sources of energy that can be called upon to produce electricity independent of the weather or the time of day are crucial to keeping the lights on.

It’s great news that solar is becoming less expensive and closer in price to other sources of energy. This shows that our energy future is indeed bright. But despite claims of grid parity, the real hurdle for solar developers is producing electricity on demand instead of just when the sun is shining. When solar can do that at the same price as coal and natural gas, then it truly will have reached grid parity.

[8] Even those who are bullish about solar’s prospects recognize that battery storage has to be effective and widespread before solar can significantly expand. For more, see John Aziz, Does solar energy have a battery problem?, The Week, September 22, 2014, http://theweek.com/article/index/267440/does-solar-energy-have-a-battery-problem.

[9] Tom Randall, While You Were Getting Worked Up Over Oil Prices, This Just Happened to Solar, Bloomberg, October 29, 2014, http://www.bloomberg.com/news/2014-10-29/while-you-were-getting-worked-up-over-oil-prices-this-just-happened-to-solar.html.

Ozone Rule is All Pain, No Gain