Hillary Clinton recently announced two energy goals that she would undertake as President:

Unfortunately, Hillary’s goals will not support U.S. jobs; but rather, Chinese jobs—since the Chinese make the majority of PV solar panels.[i]

The goals, if met, are meant to increase installed solar capacity by 700 percent, reaching 140 gigawatts by 2020, and expand renewable energy to at least a third of all electricity generation.

Mrs. Clinton’s fact sheet provides the following graph to show how dramatic the solar capacity goal would be. According to the Solar Energy Industries Association, there are about 20 gigawatts of solar capacity in the United States today.[ii] With current policy, the Energy Information Administration (EIA) expects it to grow to 27.6 gigawatts by 2020.[iii] Mrs. Clinton expects to exceed EIA’s current policy forecast by 407 percent. 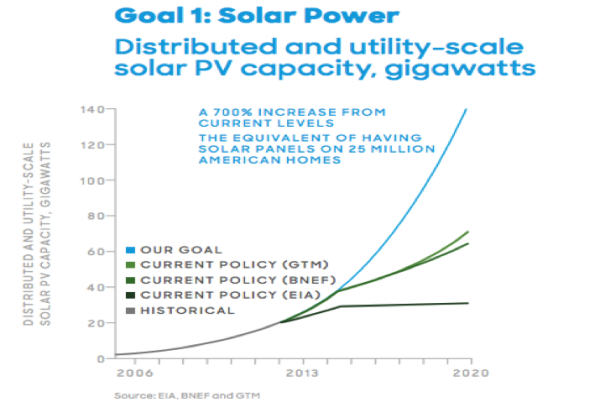 Even EIA’s Analysis of EPA’s proposed ‘Clean Power Plan’, which reduces carbon dioxide emissions by 30 percent from 2005 levels by 2030 from existing power plants, just ups the capacity of solar to 32 gigawatts by 2020.[iv] That is because wind turbines are less expensive than solar power and are also favored by EPA in its design of the ‘Clean Power Plan’. According to EIA, solar photovoltaic (PV) power is 70 percent more expensive than wind power in 2020.[v] Even by 2030, EIA projects that solar capacity under the Clean Power Plan will be just 76 gigawatts, about half of Mrs. Clinton’s 2020 goal. Even by 2040, it is short of Mrs. Clinton’s goal at 136 gigawatts. The extra 120 gigawatts of solar power in Mrs. Clinton’s plan in overnight capital costs alone would total $428 billion ($2012 dollars). And taxpayers would be paying a hefty portion of the bill.

President Obama promised to bring jobs to the United States through his programs to incentivize the solar and wind industries. But failures like Solyndra and inexpensive labor in China results in substantial U.S. imports from that country and elsewhere in Asia. In 2012, China provided 35 percent of our imported photovoltaic modules with Asia providing 81 percent. Of our total supply that year, the United States only manufactured 12 percent domestically.

That data is the most recent available from the EIA. But it is clear from worldwide manufacturing data that China is taking over the production market for solar PVs. China has been the world’s largest manufacturer of solar panels since 2008, and since 2011, has produced the majority of global photovoltaics on an annualized basis. By the end of 2017, China is expected to have enough manufacturing capacity to produce 51 gigawatts of photovoltaics per year, an amount over twice as large as the global production of 24 gigawatts in 2010. So China will have the capacity to supply U.S. needs to help Mrs. Clinton achieve her goal. 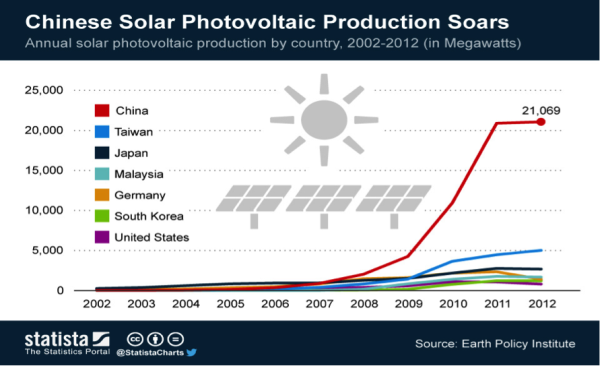 Chinese solar manufacturing policy was driven by its export potential rather than concerns about supporting domestic installations, which were satisfied by default. Between 2007 and 2012, Chinese annual solar installations grew by over 175 times to 3,567 megawatts. Its output of PV cells in 2012, however, was 23,000 megawatts.[vi] Thus, about 85 percent of capacity was exported in that year. It produced 71 percent of global module production in 2012. (See table below.) In 2013, 71 percent of the crystalline modules produced worldwide were from China, totaling 26.5 gigawatts. China dominates the market because of its domestically available polysilicon, a favorable regulatory environment, and its inexpensive labor force.[vii]

President Obama’s war on coal has made it harder to for the United States to use our coal resources, which are by far the largest in the world. Instead of using our own coal, Mrs. Clinton now proposes to outsource our energy future to Asian—and particularly, Chinese—manufacturers.

Mrs. Clinton has wildly optimistic goals for solar power in this country that the American taxpayer will be supporting if she is elected. President Obama expected jobs to abound thanks to his move toward renewable energy. But rather than being made in America, solar modules are primarily being manufactured in China, which will continue to be the case due to the country’s favorable regulatory environment and inexpensive labor. Americans should ask themselves if they want to pursue deliberate policies that will make us more dependent on foreign sources for our energy when we have energy in tremendous abundance right here at home.

[iv] Energy Information Administration, Analysis of the Impacts of the Clean Power Plan, May 2015, http://www.eia.gov/analysis/requests/powerplants/cleanplan/pdf/powerplant.pdf

It's Time for President Obama to Approve Keystone XL