Since he took office, Secretary of Interior Salazar has aggressively limited domestic energy production from efficient sources of energy. He revoked oil and gas leases in Utah, delayed taking action to open up additional areas for offshore energy development, and halted a program to allow commercial oil shale leasing. All of these programs would have created American jobs without imposing additional costs on taxpayers.

Now, after months of limiting access to additional sources of domestic energy, Secretary Salazar has decided to fast track taxpayer-subsidized solar energy development on federal lands. The Bureau of Land Management (BLM), an agency within the Department of Interior, announced earlier this month its intent to use 676,048 acres in six states—California, Nevada, Utah, Arizona, New Mexico, and Colorado—as solar energy study areas. The process to prepare these areas will take 2 years. The first step—soliciting comments via a Federal Register Notice—has already been completed. Comments were due by July 30, 2009. Salazar claims that this action, which will permit the construction of 13 commercial-sized solar facilities on public lands, will create 50,000 jobs.[1]

Salazar failed to mention that because solar power is heavily subsidized by taxpayer dollars, the jobs this plan creates will lead to many jobs lost elsewhere in the economy. He also failed to note that electricity generated by these plants will cost consumers 2.5 to 4 times more than generation from efficient energy sources like coal and natural gas. And solar is subsidized almost 100 times more than petroleum and natural gas, as measured on an electricity production basis (that is, in terms of dollars of subsidy per megawatt-hour produced).

Solar Power Is the Most Expensive Renewable

For decades, advocates of solar power have argued that it will soon be cost-competitive with conventional energy sources. But solar continues to cost much more than other, more efficient, sources of producing electricity. Economist Gilbert Metcalf of Tufts University compiled the table below comparing the cost of electricity from various sources.[2] The column titled “Current Law” shows the price of electricity under current law. However, current law provides for differing tax treatment for each source of electricity. To cancel out the different tax treatments for the different sources of electricity, Metcalf calculated the column titled “Level Playing Field,” which shows the cost of electricity assuming all of the sources were treated equally by the tax code. The last column shows the price if there were no taxes. 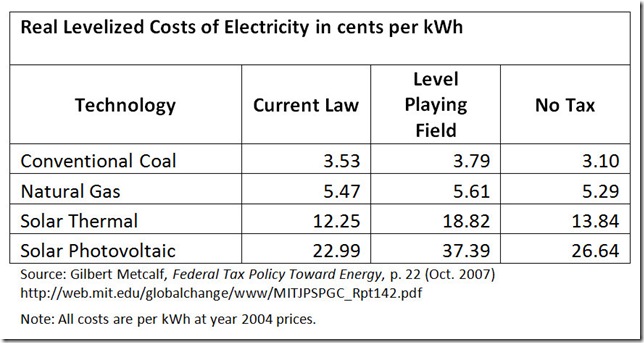 Metcalf explains that the costs of wind and solar shown here are actually too low because the cost does not reflect the fact that wind and solar work only intermittently. People demand access to electricity 24 hours a day and become frustrated when the lights go off, even for a short period. To have electricity when clouds cover the sun or the wind is not blowing requires stand-by power that can produce electricity when the renewables are not available.

Solar Power Will Continue to be the Most Expensive Renewable

According to the Energy information Administration (EIA), an independent agency within the Department of Energy, solar will continue to be the most expensive source of renewable electricity. EIA recently calculated the average cost of generating power from new fossil fuel, renewables, and nuclear energy. They estimate that by 2016 solar power will still cost 2.5 to 4 times more than the cheapest alternative, coal, which currently generates almost 50 percent of our electricity.

In reality, solar is even more expensive. EIA applied a three-percentage point increase to the cost of capital for coal-generated electricity to account for the possibility that future coal projects may need to purchase allowances or invest in other greenhouse gas emission-reducing projects to offset their emissions. This three-percent increase is similar to a $15 per ton carbon-dioxide-emissions fee.[3] On the other hand, EIA applied a two percentage point reduction in the cost-of-capital for eligible renewable technologies to take account of the loan guarantee program of the stimulus bill.

The federal government provides large subsidies for solar power generation in an effort to make solar more cost-competitive. Solar is eligible for a 10-percent business investment tax credit, which was made permanent as part of the Energy Policy Act of 1992. The Energy Policy Act of 2005 established a 30-percent personal tax credit, capped at $2,000 for the purchase of solar electric and solar water heating property. That tax credit was extended to 2016 by the Emergency Economic Stabilization Act of 2008, which also lifted the $2,000 cap and allowed electric utilities to qualify. [4]

To understand the significance of those subsidies, the EIA compared them to other fuels used for electric generation. The EIA calculated that federal subsidies for solar in fiscal year 2007 were over 55 times higher than those for traditional coal-fired generation and almost 100 times more than those for petroleum and gas generation, on an electricity production basis.[5] Even more stark differences in subsidies were documented by the General Accounting Office (GAO), which found that solar received subsidies over 1,200 times the subsidies provided to coal, on an electricity production basis.[6] The difference is largely in accounting, in that GAO attributes all solar subsidies to electricity generation where EIA attributes the majority of solar subsidies to residential, commercial, and industrial end users.

To judge the relevance of Secretary Salazar’s statement about job creation, let’s look at other countries that have more experience with solar technology construction. Spain, for example, requires that 20 percent of its electricity be produced from renewable energy by 2010. Its National Energy Commission estimates that 2,945 megawatts of solar capacity were installed by year-end 2008, making Spain second among nations for installed solar capacity. That capacity generated less than one percent of Spain’s electricity in 2008, and at a price per kilowatt hour that was over seven times higher than the average price of electricity. To attract investors and make renewable energy competitive against other forms of energy, Spain regulated rates and subsidized its renewable market. However, a prominent Spanish researcher found that for each megawatt of solar energy installed in Spain, 12.7 jobs were lost elsewhere in its economy. While solar energy may appear to employ many workers in the plant’s construction, it consumes a substantial amount of capital that would have created many more jobs in other parts of the economy. [7] Recently, the Spanish government decided to slash subsidies to solar power. The government will subsidize just 500 megawatts of solar projects this year, down sharply from 2,400 megawatts last year. [8]

The land mass requirement for solar technology is large, which is why Salazar’s BLM is putting aside over 670,000 acres for it. Compared to nuclear power, for example, the acreage requirement is almost 230 times as much.[9] For this reason, some politicians are urging that the size of solar projects be limited. For example, Interior Appropriations Subcommittee Chairwoman Dianne Feinstein (D–Calif.) said solar projects are “huge” and their size should be limited so that they do not “become an enduring blight upon the land.” She said solar installations require fences, troughs, and steam plants. “That has a huge mark on land that we’re trying to conserve.”[10]

Some argue we need increased electricity production from solar power to reduce our reliance on oil, coal, and natural gas. Solar currently, however, produces only 0.02 percent of the electricity generated in this country. Its increased production will not displace petroleum or make the United States more energy independent, as 99 percent of our electricity is already produced by non-petroleum sources. [11] Our demonstrated reserve base of coal will last over 436 years, at current consumption levels,[12] and much more coal is known to be available.[13] Nuclear fuel can be reprocessed and used again to generate electricity in our nuclear facilities—something other countries are already doing. And although there is great political desire to force the use of renewable energy to replace fossil fuels, it simply cannot happen anytime soon, as hydrocarbons supply 84 percent of our current energy demand[14] and 71 percent of our electricity generation.[15] The level of manufacturing capacity needed to replace a significant portion of that simply does not exist. For example, new solar installations required to replace just one percent of U.S. fossil fuel generated electricity would consume all of the world’s current solar module manufacturing capacity.[16]

As noted above, while Salazar is fast-tracking solar, in early February, his Interior Department canceled oil and gas leases on 77 parcels of federal land in Utah and launched a review to see whether or not they were appropriate for leasing. Also in February, Salazar halted the previous administration’s oil-shale research and development leasing efforts, saying he would offer new lease terms after seeking public input.[17] In April, a federal circuit court invalidated the 2007–2012 offshore leasing program, saying the most promising sales in Alaska needed more documentation.[18] At the end of July, the court clarified that they were only requiring the Alaska OCS sales to be placed on hold, meaning the Gulf of Mexico sales could proceed. Alaskan OCS areas are the most prospective for new oil and gas discoveries because few wells have been completed there.[19]

Last year, when oil prices exceeded $140 per barrel, over twice the current price, Congress allowed the moratoria on oil and natural gas development in restricted areas in the outer continental shelf to expire.[20] However, all of the recent actions noted above reduce our ability to increase domestic production of oil and natural gas, lessen petroleum imports, and create needed jobs. The outer continental shelf—including sections which have been off limits to drilling since the early 1980s—may contain as much as 115 billion barrels of oil.  Taking full advantage of our potential offshore energy production could generate 1.2 million new jobs, $8 trillion in additional economic output and, $2.2 trillion in extra tax receipts nationwide.[21]

For decades, the federal government has restricted access to vast tracts of our domestic energy resources. Now, the government is mandating politically popular, but inadequate energy sources such as wind and solar. Taken together, these policies will create higher prices for U.S. consumers and restrict job formation. In the case of energy policy, the facts speak for themselves—our government is clearly the problem, not the solution.

[19] The Associated Press, Offshore drilling ruling does not apply to the Gulf, http://www.google.com/hostednews/ap/article/ALeqM5ijmzoObcMDyeXXrne4t-7meTNxQwD99OC5V00