In real estate, the old saying is “location, location, location,” and that mantra can be adapted to the needs of a struggling American economy: “jobs, jobs, jobs.” Tonight, President Obama will address Congress and the American people, making a pitch for a bold new jobs plan that will largely focus on infrastructure spending, but more interestingly, green jobs. This will be a difficult sell to make.

One year ago, President Obama touted Solyndra as a company, “leading the way toward a brighter and more prosperous future.” Now they are bankrupt, squandered over $500 million in taxpayer money, and the FBI raided their headquarters today.  This is not an isolated example, but rather fits the theme of green job creation as we pointed out here, here and here.

Yesterday, Wood Mackenzie Energy Consulting came out with a study that makes the argument that $1.4 million private sector jobs will be created if the federal government allows for more energy exploration and development. This study echoes earlier findings, which you can read here and here.  If Obama were serious about job creation and reducing the federal deficit, he would expedite the development of American natural resources instead of only leasing 2.4 percent of federal lands.

If you’re more of a visual learner, take a look at this chart: 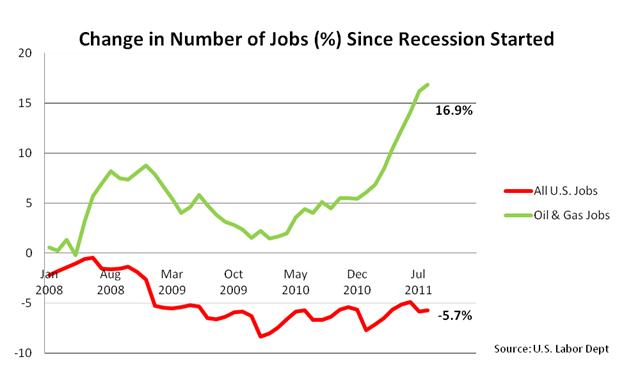 The green jobs expansion the Obama Administration expected was not a bang, but a whimper and sadly, it’s the taxpayers who suffer.

5 Reasons Why The Federal Government Should Get Out of the Finance Business: Solyndra Edition