Now that we are entering a second term for the Obama Administration where spending cuts do not seem to be high on its priority list, it seems fitting to evaluate how we fared from the stimulus spending during the first 4 years. The record is not good, but it is clear; if the government is involved in funding an operation, it increases the likelihood that the investment decisions will be based upon political and not economic or energy reasons.

The stimulus funding in 2009 from the American Recovery and Reinvestment Act (ARRA) totaled $787 billion[i], and most of those funds have been paid out according to the government’s website. The total that went to green energy projects is not clear. Brookings estimated it at $51 billion, with a total government spending (both stimulus and non-stimulus) on green initiatives at $150 billion through 2014[ii].

About $100 billion (two-thirds) of that is expected to fund renewable energy, including subsidies for wind, solar and biofuel projects and research and development for new technologies. Conservation is expected to garner another $15 billion, funding for electric cars and high speed rail about $10 billion each, and smart grid and nuclear power about $6 billion each. 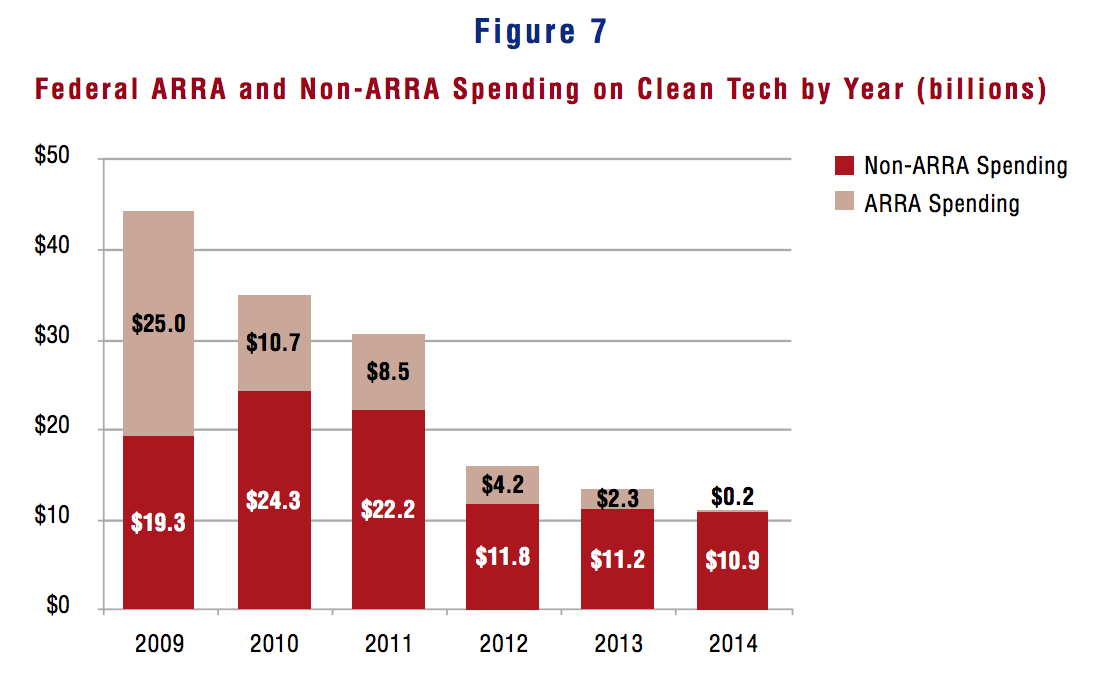 The failures seemed to have started with Solyndra, a solar manufacturer that received almost all of its $535 million loan before filing for bankruptcy in 2011. The cause of Solyndra’s demise was its complicated technology that required a custom manufacturing facility and an expensive price tag. Cronyism with the Obama Administration coupled with a desire for Vice President Biden to tout its importance with a public relations visit to its California facility pushed the loan guarantee out the door quickly to the detriment of the American taxpayers. Solyndra’s biggest investors were funds operated on behalf of the family foundation of Tulsa billionaire and Obama fundraising bundler George Kaiser, who has been a frequent visitor to the White House. Solyndra was so dependent on government for its existence that in 2009 its CEO declared in an email that “The ‘Bank of Washington’ continues to help us!”

Abound Solar, another solar manufacturer that received a Department of Energy loan guarantee for $400 million, filed for bankruptcy in June 2011 after it had laid off 70 percent of its workforce that February. According to the Daily Caller, Abound Solar sold defective or underperforming products, and company personnel claimed DOE officials knew their panels were faulty before they received taxpayer dollars. Virtually all of the panels Abound manufactured underperformed, putting out between 80 and 85 percent of the promised wattage and leading to tens of thousands of panels having to be replaced, particularly towards the end of the company’s life. Cronyism was believed to be a factor in the Abound loan guarantee. Wealthy philanthropist Pat Stryker, whose Bohemian Companies had significant investment in Abound, was a generous donor to President Obama as well as to other Democrats.

First Solar was one of the biggest recipients from DOE’s loan guarantee program garnering over $3 billion. First Solar received one of the last loan guarantees before the program expired at the end of September 2011. At the time, DOE was under pressure not to repeat their mistakes with Solyndra, but again they provided a loan guarantee to a losing company.[iii]

Early in 2012, the company laid off half of its employees at its Antelope Valley Solar Ranch One project in the Southern California desert, which was the recipient of a $646 million loan guarantee that was to create 350 construction and 20 permanent jobs. In December 2011, First Solar announced that it would eliminate 100 positions, including 60 at a research and development center in Santa Clara, California.

Besides Antelope Valley, the DOE partially guaranteed $1.46 billion in borrowing for First Solar’s Desert Sunlight Solar Farm west of Blythe, California, and $967 million for First Solar’s Agua Caliente Solar project in Yuma County, Arizona. But, another round of layoffs came in April 2012, as the company announced it would slash global payroll by 2,000 workers in Malaysia, Europe and the United States.

First Solar sold much of its $3 billion in federal loan guarantees to third parties before it laid off 30 percent of its workforce. Its stock price plummeted by more than 90 percent from its high in 2011, but not before its head officer received more than $329 million in stock sales since 2009.

Fisker Automotive, a Finnish electric car maker, originally received $529 million in DOE loan guarantees, but was cut off at $193 million because it failed to reach milestones for its luxury vehicle Karma.  The company suffered recalls of its extended-range electric sedan, costing over $100,000, because of technology flaws and failed batteries, which resulted in fires. The federal subsidies attracted some of the rich and famous, as it has been a favorite status purchase for Hollywood movie stars and celebrities, as well as rappers and Hip Hop musicians. Even soap opera stars are apparently enamored with the Fisker, despite its problems. Consumer Reports gave the Karma a terrible review, calling it the worst luxury sedan on the market.

Fisker’s battery supplier, A123 Systems, supplied the defective batteries, and declared bankruptcy in October. The Massachusetts-based battery manufacturer received more than $279 million from DOE in loan guarantees to refurbish two Michigan plants plus other projects, but received about $132 million before it declared bankruptcy. Here again the loan guarantee was moved quickly by DOE, with President Obama thanking Energy Secretary Steven Chu “for his extraordinary work to get the money out the door quickly and wisely.” Further, A123’s officers and directors made more than $11 million in stock sales before the bankruptcy filing in October 2012.

Before declaring bankruptcy, the company awarded its executives big raises and golden parachutes in the event the company changed ownership. A123 originally made a deal to be sold to China’s Wanxiang Group, which temporarily fell through when it declared bankruptcy.  Johnson Controls, the U.S. largest battery maker that has its own federal loan guarantee for $299 million and has drawn about $123 million, wanted to purchase A123 but would have to repay a loan from Wanxiang Group that A123 had borrowed. The final determination was to be made in an auction held in early December 2012 based on the bankruptcy filing.

U.S. Congressmen had concerns over A123’s potential sale to a Chinese firm because of the fact that American taxpayers paid for its expansion and because the company has defense contracts that included classified information. Wanxiang Group won the bid for A123 for around $250 million. A123’s U.S. government and military contracts went to Navitas Systems. Wanxiang excluded them due to concerns raised by politicians and a military group that sensitive technology was slipping away from the United States and into foreign hands.[v]

The Wanxiang purchase of A123 marks the second major foreign purchase of a U.S. battery company backed by DOE funding.  Ener1, a battery-maker with operations in Indiana that received $118.5 million in DOE loan guarantees, was snapped up in another bankruptcy by a Russian interest. And, the former CEO of Ener1 served as an advisor to Wanxiang in its purchase of the A123 assets.

For a complete listing of bankruptcies and problem companies that were awarded stimulus funds, click here.

As the above discussion implies, the government is not good at determining winners and losers, and favoritism for those with close ties to political figures seems to be present in many of the failures.  Further, outside forces pushed DOE loan guarantees to be awarded quickly without sufficient review. American taxpayers’ dollars were being used to support companies that were large donors to President Obama and to other candidates, without garnering any benefits.

Numerous companies went bankrupt despite free or easy money either because their technologies were too complicated, too expensive, or markets were insufficient to support their products. The federal government usually works in a slow and methodical pattern, but that was not to be the case with the Obama Administration’s drive for “green” technology. Changes clearly need to be made during President Obama’s second term, but with little criticism coming from the media, it is highly questionable whether this waste of our hard earned money can be corrected.

Economics of the Bakken Oil Boom: What the Rest of the Nation is Missing