Governments are still providing subsidies for solar energy technologies, but there are beginning to be some bumps in the road for these technologies. Spain, which has long been a renewable energy advocate with the first mandates for renewable production and high levels of subsidies, is now taxing owners of rooftop solar panels to pay for its huge debt to power producers resulting from the country’s regulations and renewable energy subsidization.  But the issue goes further. Owners of rooftop solar panels are using the electric grid when they sell excess electricity, but are not paying for that service. In the United States, electric utility companies are proposing alternatives to remedy the problem.  Also, some U.S. homeowners who have elected to add solar panels are astounded by the level of state and federal government subsidization, which cannot be entirely recouped, and questioning the sanity of the programs that cannot generate enough electricity to cover their costs.

Spain is in debt to its power producers to the tune of 26 billion Euros (almost $35 billion) due to its regulations and subsidization of renewable energy technologies. For perspective, Spain’s economy is about 1/12th the size of the U. S. economy. To pay off its debt, it is taxing owners of rooftop solar panels 6 Euro cents per kilowatt hour (about 8 U.S. cents per kilowatt hour) and the country is no longer allowing net metering of those solar panels. That is, homeowners will no longer get paid for any excess power they produce. The tax, which will be imposed on all grid-connected rooftop solar panels, is to pay for the use of the electricity grid. If homeowners fail to connect their solar panels to the grid in an effort to avoid the tax they will be fined exorbitantly.[i]

Because the cost of solar panels has plunged in half, more Spanish home owners are able to purchase the panels, saving themselves the high cost of purchased electricity from the grid that runs 19.488 Euro cents per kilowatt hour in Spain (25.9 U.S. cents per kilowatt hour), more than double the average residential price of electricity in the United States. Under the old system, the payback period was about 5 years for a 1,600 to 2,100 Euro solar system ($2,127 to $2,791). But, the tax increases the payback period to 17 years, which could make the purchase no longer viable given the economic life of the technology.[ii]

None of this should come as a surprise. In March 2009, we warned of exactly this problem in an IER-commission “Study of the effects on employment of public aid to renewable energy sources” by Gabriel Calzada. At the time, Grist and the National Renewable Energy Laboratory tried to cast dispersions on Dr. Calzada’s paper, but time has proven Dr. Calzada’s analysis correct. The simple truth is that something that cannot go on forever won’t. Dr. Calzada recognized that in early 2009, but it took the Spanish government another couple years to catch on.

As we recently discussed at IER, electric utility companies in the United States are now realizing a similar situation, particularly in the states with a greater amount of rooftop solar installations, such as California and Arizona. Utilities are indicating increasing amounts of home-based solar installations that feed electricity to the grid could threaten their ability to maintain the nation’s electricity grid.

In Arizona, its largest electric utility company, Arizona Public Service, submitted two proposals to its public service commission. In one proposal, residential customers selling electricity to the grid would have to pay a monthly fee, a convenience charge, for use of the grid. In the other proposal, homeowners would get a small ongoing bill reduction based on the market rates that the utility pays to other power generators. Customers that currently have a rooftop solar system would be given a “20-year grace period” as would new customers that connect a rooftop solar system by mid-October.[iii]

It is estimated that the average net-metering return is currently at $0.15-$0.16 per kilowatt-hour, saving residential customers on average about 70 percent off their bill. The first proposal presented to the Arizona public service commission would reduce the return to $0.06-$0.10 per kilowatt-hour. The second proposal would reduce the owner’s savings by about 50 percent.[iv] 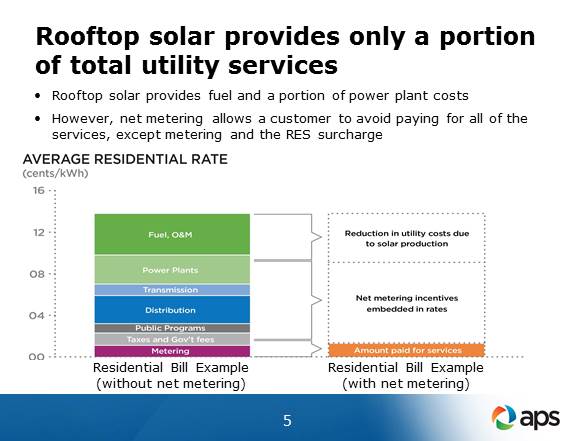 California is also facing similar issues. In California, the payments for excess electricity are tied to the daytime retail rates customers pay for electricity, which include the costs for maintaining the grid. Under the current program, it is estimated that California’s three major utility companies could have to make up almost $1.4 billion a year in lost revenue from solar customers that could shift to about 7.6 million non-solar customers. If that lost revenue were evenly spread among customers, it would add $185 a year.[v]

The situation in Spain, Arizona, and California shows that it could make economic sense to install solar panels at home, but the math does not necessarily work out in places that are less sunny than Spain, California, and Arizona.

A homeowner in Rochester, New York decided to put a rooftop solar system on his house to demonstrate the exorbitant government waste. In 2009, the homeowner put 20 solar panels on a pergola that tilts to follow the sun and provides shade for plants beneath it.  The system cost $42,480, and the home owner received $29,504 from the federal and state government in subsidies and tax credits (almost 70 percent of the total project cost), making the home owner’s investment just under $13,000 for the system. Of the $29,504 the home owner received in government funds, about $17,000 came from the New York State Energy Research and Development Authority; the remainder from the federal government.[vi]

Governments and homeowners may rush into a new technology without fully appreciating all the issues inherent, but eventually the economics catch up and there is a price to pay. This is true with respect to the rooftop solar industry that is heavily subsidized by federal and state governments, but which could end up costing non-solar homeowners for its share of the grid if net metering continues and wasting government funds on an industry that cannot generate enough electricity to cover its cost.

How Big Ethanol Hopes You're a Dope