Louisiana has lower energy prices than the national average. Its gasoline price is the 5th lowest among the states and 9 percent below the national average. The state’s lower gasoline prices are due in large measure to the state’s numerous oil refineries and its oil producing and refining operations in and near the Gulf of Mexico. Its electricity prices are 30 percent lower than the nation’s average electricity price due to its generation mainly from natural gas, coal and nuclear power and lack of regulatory policies and mandates that have increased prices in other states. The state is rich in crude oil and natural gas resources. Oil and gas deposits are found both onshore and offshore in state-owned waters. Due to its large industrial sector that includes chemical manufacturing and petroleum refining industries, per capita energy consumption in Louisiana ranks among the highest in the nation. 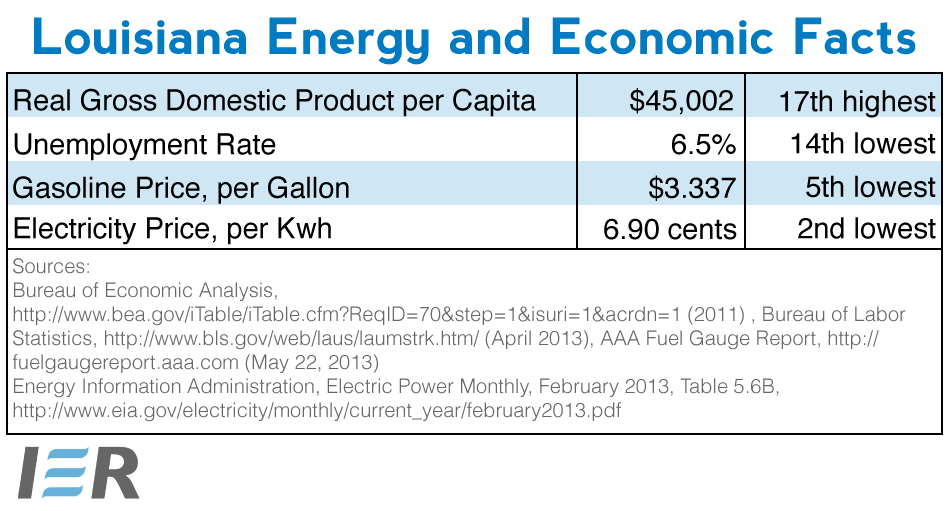 Louisiana’s natural gas consumption is high due to industrial consumption from its chemical plants and refineries, residential consumption for home cooling and heating, and electric generation.  Nearly one-half of Louisiana households use natural gas as their primary energy source for home heating and over half of the state’s electricity generation comes from natural gas-fired generating plants.

Louisiana plays a major role in the movement of natural gas from the U.S. Gulf Coast region to markets throughout the country. Despite its high state demand, Louisiana delivers much of its natural gas production to other states via a vast network of interstate pipelines. Over half of the natural gas that is supplied to Louisiana enters the state via pipelines from Texas. For example, the 195-mile Tiger Pipeline was completed in August 2011 extending from Carthage, Texas, to Delhi, Louisiana, and interconnects to seven interstate pipelines. It carries natural gas from the Haynesville Shale, Bossier Shale and Fort Worth Basin production areas. The state also receives, stores, and re-ships natural gas supplies from international sources, including Qatar and Trinidad and Tobago.

Louisiana has 18 natural gas storage facilities and its storage capacity is among the highest in the nation. These underground storage facilities, located in depleted fields and salt caverns, allow Louisiana to store its natural gas production during the summer when national demand is typically low, and ramp up delivery during the winter months when markets across the country require greater volumes of natural gas to meet their home heating needs. Due to the growing use of natural gas for electricity generation in the United States, Louisiana has also withdrawn natural gas from storage during the summer months to help meet peak electricity demand for air-conditioning use.

Louisiana’s state production of natural gas peaked in the early 1970s and its outer continental shelf production peaked shortly after the turn of the century. To offset the decline in Louisiana’s natural gas supply, the state imported liquefied natural gas (LNG) from overseas. Louisiana contains one offshore and three onshore LNG import terminals, more than any other state in the nation.

Louisiana’s first LNG import terminal, located in Lake Charles, came online in 1981 and is the second largest LNG import terminal in the United States. The largest LNG terminal is located in Sabine, Louisiana, which opened in 2008 and can import up to 2.6 billion cubic feet per day. A third terminal is located in Hackberry, Louisiana.  Because of the shale gas revolution hitting the United States due to abundant and inexpensive gas produced by hydraulic fracturing and horizontal drilling technology, these terminals are now requesting approval from the Department of Energy to export natural gas, rather than import it.

Louisiana ranks seventh in the nation in crude oil production behind Texas, North Dakota, Alaska, California, Oklahoma, and New Mexico. Commercial oil production began in Louisiana in the early 20th century, soon after the discovery of the Spindle Top oil field in neighboring Texas. Louisiana’s onshore production increased until about 1970, when it peaked at more than 1.35 million barrels per day. Output quickly declined thereafter and has fallen to a fraction of the 1970 peak.

Although drilling had taken place in the lakes, marshes, and bayous of Louisiana since the 1920s, it was not until after World War II when offshore workers applied new skills and technologies to overcome the challenges of producing oil from beneath the ocean floor. A historical milestone for Louisiana’s offshore industry occurred in 1947, when Kerr McGee completed the world’s first offshore well out of sight of land. Although Louisiana’s state offshore oil production peaked in 1970, the same year as onshore production, Louisiana’s production in the federal outer continental shelf continued to expand into the 21st century as new offshore technologies allowed companies to access reserves in deeper, more remote areas of the Gulf. This technology’s deployment was incentivized after the U.S. government encouraged investment in the deep waters of the Gulf with the passage of the Deep Water Royalty Relief Act of 1995 (DWRRA). Louisiana’s offshore petroleum industry, like its natural gas industry, had to curb production for several months in 2005 when hurricanes Katrina and Rita damaged offshore oil platforms and similarly in 2008, when hurricanes Gustav and Ike damaged offshore equipment and forced refining and production shutdowns.

Louisiana is also a major importer of crude oil from around the world. The State receives petroleum supplies at several ports, including the Louisiana Offshore Oil Port (LOOP), the only port in the United States capable of accommodating deep-draft tankers. The LOOP, which began receiving foreign crude oil in 1981, can import up to 1.2 million barrels per day and is connected through a network of crude oil pipelines to about one-half of U.S. refining capacity. Associated with LOOP are Clovelly Dome, a 40-million-barrel salt cavern storage facility, and the Capline pipeline, which is the largest pipeline system delivering crude oil from the Gulf Coast to the Midwest. Because Louisiana’s infrastructure provides multiple connections to the nation’s commercial oil transport network, the U.S. Department of Energy chose the state as a site for two of the Strategic Petroleum Reserve’s four storage facilities. The two facilities consist of 28 salt caverns with a capacity of over 300 million barrels of crude oil located in Bayou Choctaw and West Hackberry.

Louisiana has 19 refineries, 18 of them operating, and is second only to Texas in both total and operating refinery capacity. Its refineries are mostly located along the Lower Mississippi River and in the Lake Charles area. With a refining capacity of more than 3 million barrels per day, Louisiana produces more petroleum products than any state but Texas. Many of Louisiana’s refineries are sophisticated facilities that use additional refining processes beyond simple distillation to yield a larger quantity of lighter, higher value products, such as gasoline. Because of this “downstream” capability, Louisiana refineries often process a wide variety of crude oil types from around the world, including heavier, lower value varieties.

Over half of Louisiana’s refined petroleum products are sent to other states for consumption. The Plantation Pipeline, originating near Baton Rouge, supplies much of the South with motor gasoline and distillate fuel. Other major product pipeline systems passing through the state include the Colonial, Centennial, and TEPPCO systems. Petroleum products that are not shipped to other states primarily feed Louisiana’s industrial sector, which includes one of the largest petrochemical industries in the nation. 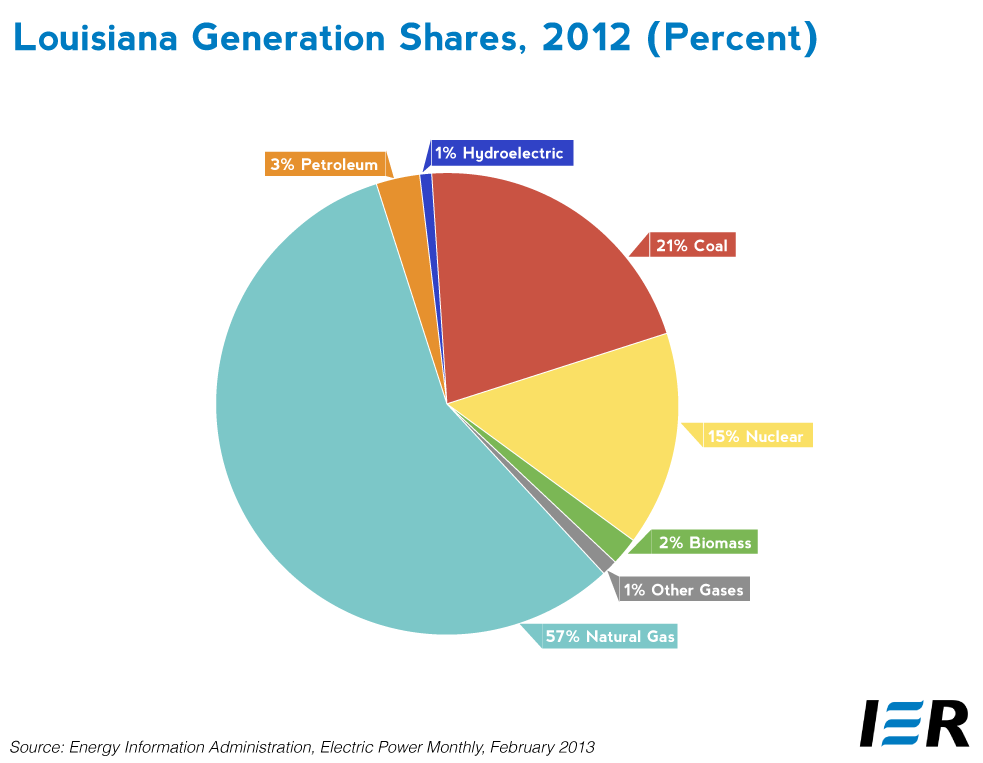 Fortunately for the citizens of Louisiana, the state has not imposed many of the regulations that other states have imposed that usually increase the price of energy. Like most states, Louisiana requires new residential and commercial buildings to meet energy efficiency standards and state agencies to increase appliance efficiency standards using Energy Star as a minimum standard. But, the state does not mandate the use of renewable energy in electric generation although it has a pilot program researching the issue. It does require, however, a small amount of biofuels to be blended into gasoline.

The following summarizes the programs Louisiana has:

Louisiana requires new residential and commercial buildings to meet energy efficiency standards. Residential buildings must meet the 2006 International Residential Code (IRC), while commercial buildings must meet ASHRAE 90.1-2007 or the 2009 International Energy Conservation Code (IECC). The IRC, IECC (both developed by the International Code Council), and ASHRAE (developed by the American Society of Heating and Refrigeration and Air Conditioning Engineers) are model codes that mandate certain energy efficiency standards. Beginning in January, 2007, codes are upgraded every 3 years. The last commercial code update was effective on August 1, 2012, and the last residential code was effective January 1, 2011.

Louisiana enacted legislation (SB 240) in July 2007 which requires energy efficiency measures to be incorporated in the construction and renovation of major facility projects funded by the state. Each major facility project must be designed, constructed, and certified to exceed the requirements of the state energy code by at least 30 percent. Such improvements must also prove to be cost effective based on a life cycle cost analysis with a payback of no more than 30 years. This standard applies to all buildings larger than 5,000 square feet.

The Louisiana Public Service Commission adopted rules for net metering and interconnection in November 2005. Louisiana’s rules require publicly-owned utilities and rural electric cooperatives to offer net metering to customers with systems that generate electricity using solar, wind, hydropower, geothermal or biomass resources. The rules apply to residential facilities with a maximum capacity of 25 kilowatts (kW) and commercial systems with a maximum capacity of 300 kW. In 2008 (Act 543), the state legislature increased the net metering and interconnection limit from 100 kW to 300 kW for commercial and agricultural use.

Unlike many other states, Louisiana does not have a Renewable Portfolio Standard that requires a specified amount of electricity to be produced from qualified renewable generating sources. In June 2010, however, the Louisiana Public Service Commission approved a Renewable Energy Pilot Program, which was adopted in November 2010. The goal of the pilot is to determine whether a renewable portfolio standard is suitable for Louisiana. The pilot program has two major components: the Research Component and the Request for Proposal (RFP) Component. The Research Component requires utilities to collect data on the feasibility of different renewable energy resources. Under this component, each investor-owned utility must develop a minimum of three projects. There are two options for the projects, and utilities may pick any combination of the two options. Projects must be fully operational by the end of 2013. Under Option 1, utilities may build their own renewable energy facilities. Under Option 2, utilities must develop a tariff and an associated contract to purchase renewable energy. The amount of the tariff is $30/megawatt-hour plus an avoided-cost payment for a maximum of five years, after which it becomes equal to just the avoided cost payment. Under the RFP Component, utilities must issue RFPs for new, long-term renewable resources that will come online between 2011 and 2014. In total, the utilities must request a combined maximum of 350 MW and their share will be based on their 2009 retail sales. The contract awarded through the RFP will have terms of 10 to 20 years.

The State of Louisiana is a major energy producer and consumer, and its policies towards energy reflect an understanding that energy is a positive contribution to their economy and way of life.  As a consequence, the state is self-sufficient, creating jobs and increasingly prosperous, while other states pursuing policies that make energy more expensive are experiencing economic difficulties.