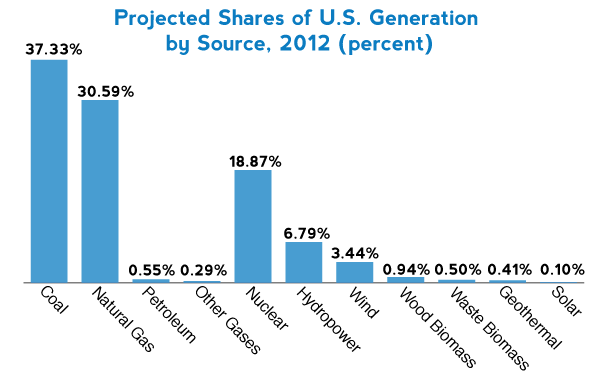 While solar power has a huge percentage increase, its base is so small that its increased generation is smaller than that of wind power and in concert with the other non-hydroelectric renewable energy sources of generation. For comparison purposes, solar power’s projected generation in 2012 would supply about one-third of Maine’s 2011 electric power needs.

Also expected to decrease is the production of ethanol due to the severe drought in the Midwest this summer, but the decrease is small measured on an annual basis—less than 1 percent between 2011 and 2012. But just looking at the summer period, the drought conditions that depressed corn harvests caused ethanol production to fall from 890 thousand barrels per day during the second quarter of 2012 to 806 thousand barrels per day in October 2012—a drop of over 9 percent. 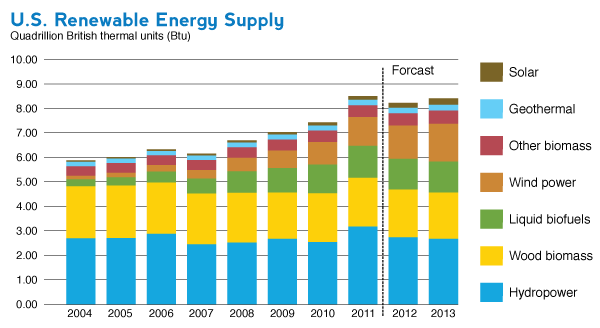 EIA expects renewable energy consumption to increase in 2013 as nonhydropower energy increases by 5 percent while hydroelectric energy declines by another 2.5 percent. This 5 percent increase results even without a production tax credit (PTC) extension because EIA forecasts assume current laws and regulations and thus counts the PTC for wind power as expiring at the end of this calendar year. Wind generation increases by almost 14 percent in 2013 due to renewable electricity standards of 30 states and the District of Columbia requiring increased generation from qualifying renewable sources in the future. Wind power increases the most in absolute terms and solar power increases the most in percentage terms—68 percent in 2013.

Hydroelectric generation hit its highest level since 1997 in 2011, and EIA expects its generation  to continue on a downward trend through 2013, returning to its long-term average level.

While solar generation has seen large percentage increases recently and EIA expects them to continue, the amount of solar generation and its contribution to the nation’s electricity supply remains small.