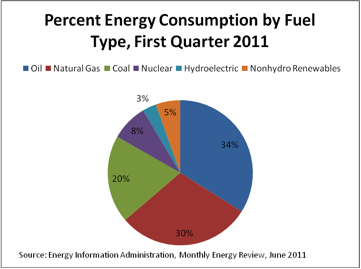 Why is energy demand important? Because the energy we consume runs our homes, our cars, our businesses, our industry and without its availability we could not exist. While for energy independence and national security reasons, we may prefer our energy to be totally produced within our 50 states, economics dictates that it may be less expensive to obtain some of those resources from abroad. That was certainly the case when oil was priced at $20 a barrel just a few decades ago.  Unfortunately, political forces are now limiting certain fuels from being produced today in the United States, and using taxpayers’ money to develop more expensive sources of energy rather than letting the market function based on economics. A freely functioning energy sector would result in a different distribution of energy supplies at lower cost to the consumer and taxpayer.

Ethanol, for example, has been promoted as an additive to gasoline and subsidized at 45 cents per gallon for domestically produced ethanol with a tariff of 54 cents per gallon on imported ethanol to protect the domestic industry. But, blending 10 percent ethanol in our gasoline has caused problems to small engines and boaters, reduced the efficiency of our motor fuel, caused higher food prices, and accomplished little in reducing greenhouse gas emissions[iv]. Now, the Environmental Protection Agency wants to up the blending amount to 15 percent, which it believes is safe for cars of model year 2001 and later, but automobile manufacturers disagree and small engine producers are against it. If politicians did not mandate its use through the Energy Independence and Security Act of 2007, ethanol would not have penetrated the market to the extent it has. Ethanol and other biofuels represent 21 percent of the 8.5 percent share that renewables contributed to our first quarter supply needs. 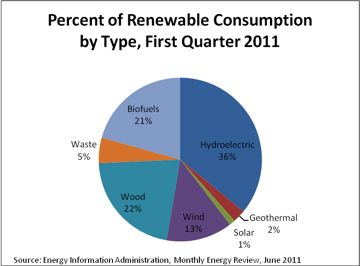 The second largest component of the renewable family, wood and waste, supplying 27 percent of the first quarter 2011 renewable energy output, like hydro power, has been in existence for many decades. Unlike wind and solar power that are intermittent energy sources of power requiring back-up, biomass can produce base load electricity. But, it has issues in further penetrating the generating sector. Generators using biomass require wood or energy crops to be trucked in around the clock, causing road damage and traffic, and its combustion releases carbon dioxide emissions that advocates say are compensated by the carbon dioxide that is absorbed by the production of the fuel source. However, how much of the carbon dioxide emitted is equally compensated by the new plant products absorbing it, may still be an issue, just as ethanol production was assumed to reduce greenhouse gas emissions until the emissions of its life cycle from production and distribution to consumption were examined.

The next largest source, wind, represents 13 percent of the total renewable energy consumed during the first quarter of 2011. Wind, like ethanol, is highly subsidized through either a production tax credit taken over ten years of the plant’s operation or an investment tax credit that currently can be rebated immediately to the producer. Additionally, wind is currently mandated to be built under various state Renewable Portfolio “Standards” (read, “mandates”). Because wind turbines generate power only when the wind blows, the generation system must have back-up power that can be used when the wind is not blowing. In reality, wind power displaces the other power, generally natural gas or coal fired generation, which must then get ramped up when the wind stops blowing. Some researchers have found that this cycling of the fossil plants results in more greenhouse gas emissions than if the fossil units were run at steady state because the ramping up requires more fuel to be burned than would be the case in steady state.

These renewable technologies together represent 3 percent of the total renewable contribution to first quarter 2011 energy supply–geothermal contributing 2 percent and solar contributing 1 percent. Solar technologies are generally the most expensive form of renewable generation, according to the Energy Information Administration.[vi] They produce energy only when the sun shines and they require either expensive battery devices to store the energy or back-up power generators so that electricity is provided when needed. Solar energy works in niche markets where large central station projects are not feasible and for solar water heating for pools and other residential uses.

The statistics provided by the news advisory are correct on a domestic production basis. However, the real story should be based on consumption statistics for the energy that we consume is the energy that powers our GDP. While renewable energy has a role to serve in our energy system, it cannot provide all the energy we need. Fossil fuels that supply 84 percent of our energy needs generally cost less than renewables, are more flexible in their usage and handling, can be imported as needed, and are less heavily subsidized. That is why historically, we have turned to them to supply our energy needs.

Concerns about fossil fuel availability have led to interest in renewables. However, the United States has a vast amount of untapped fossil fuel resources not only in coal where we lead the world in reserves, but in oil and natural gas. Shale oil and shale gas are booming and there remain untapped areas off our coast and in Alaska with oil and natural gas resources that this Administration does not want touched. Recently, a Norwegian consultancy that analyzes field data predicted that U.S. oil and natural gas output would surpass its prior combined 1972 peak in the early 2020s.[vii] Further while coal is having trouble increasing its output in the United States, coal exports topped 90 million tons in the year that ended in March, up 42 percent and the highest level since the mid-1990s.[viii] If we do not use our fossil resources, others surely will use theirs and purchase additional supplies from us when available.

[v][v] Institute for Energy Research, The Status of Renewable Energy Mandates in the States, https://www.instituteforenergyresearch.org/wp-content/uploads/2011/01/IER-RPS-Study-Final.pdf

Why Free Market in Energy?

Are Tax Hikes Good for the Economy?