Energy is critical for our economy and our future and the real issues deserve to be debated. That is why we appreciated the initial response on the American Wind Energy Association’s website to the recent study, Wind Energy: The Case of Denmark. It appears that AWEA actually read the study and raised some questions related to energy. The same cannot be said of other responses, such as this blog post from NRDC. But then, of course, AWEA’s Senior Vice President for Public Policy couldn’t help himself and resorted to the same innuendo and ad hominem attacks against any effort that gets the facts out about the true costs of wind energy production.

Wind Energy: The Case of Denmark

President Obama, the AWEA, and other supporters of wind energy point to Denmark as a model the United States should emulate. For example, as the AWEA writes in a fact sheet, “In western Denmark, wind supplies more than 25% of the electricity that is used during windy winter nights. If wind energy in the U.S. were combined with serious efforts to increase energy efficiency, we could substantially reduce our national use of fossil fuels to generate electricity.” As the Danish wind study shows, Denmark’s situation is substantially different from the situation in the United States. As a result, Denmark wind’s production is not directly replicable by the United States.

In America, it is harder to balance the electricity wind provides to the grid. Hydropower only supplies 6 percent of the electricity in the United States.[3] In some markets, such as the Pacific Northwest, hydroelectric power is plentiful. But the fickle nature of electricity from wind means that even in the Pacific Northwest it is difficult to balance the electrical load and the Bonneville Power Administration is increasing rates for wind operators by 90 percent (down from a proposed 300 percent increase).

Furthermore it is difficult for wind to replace much of the electricity generation from coal and natural gas. Coal-fired power plants are baseload electricity plants. They are not made to cycle as the wind ebbs and flows. Natural gas-fired turbines can cycle on and off to even out wind production, but natural gas-fired turbines are less energy efficient than combined cycle generation.

Electricity from wind only supplies an average of 9.7% of the electricity Denmark consumes, the rest of Denmark’s subsidized wind production is exported, bringing no direct benefit to Danish ratepayers

Wind produces the equivalent of 19 percent of the electricity consumed in Denmark. But, on average, over half of the electricity from wind in Denmark is exported. The AWEA does not understand why the Danish wind study is critical of exporting highly subsidized electricity. The AWEA writes that “it seems especially strange for a self-described “free-market” ground like IER to be so dismissive of interstate trade.”

The Institute for Energy Research and the study’s authors support free trade. The authors of the Danish wind study are concerned that Danish ratepayers subsidize wind power with few concomitant benefits to the Danes. As the study explains on page 22:

But for the Danish householder who is paying the subsidy in order to save imported fuel and CO2 emissions, the subsidy so exported brings no direct benefit at all. The total probable value of exported subsidies between 2000 and 2008, was DKK 6.8 billion (€ 916 million) during this period.

AWEA argues that “even if the claim made by the study were true, this example would have no bearing on the situation in the U.S.” The Danish wind situation is very relevant to the situation in the United States. AWEA has cited Denmark as a model for the United States (in this fact sheet for example, and this article on integrating utility-scale wind energy onto the grid). When President Obama and the AWEA cite Denmark as a model, it makes Denmark relevant.

The AWEA seems to believe that the Danish wind study is critical of electricity exports and because the United States is only weakly tied to the Mexican and Canadian electrical grid, the Danish study is of no import. This misapprehends the point of the study. There problem is not with the export of the power. The study is concerned with exporting subsidies, the benefits of which should accrue to Danes, not the Swedes or Norwegians.

The whole of Denmark is 281 miles east to west and 229 miles long. The entire population of Denmark is not far from good wind resources (as this map shows). That is not true in the United States. As this map shows, the best onshore wind resources are in the Midwest from the Texas panhandle north to the Canadian border. There is not one large city in this area, making it expensive to get electricity from this wind to market.

IER’ has more on the levelized costs of electricity production here. 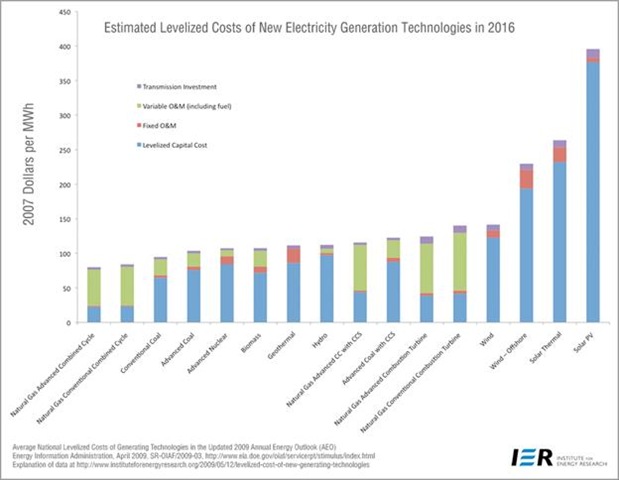 Wind energy (here, there and everywhere) is very expensive and highly subsidized

For decades the promoters of wind have argued that wind’s cost competitiveness is just around the corner. For example, in 1986, a representative of AWEA testified:

The U.S. wind industry has . . .demonstrated reliability and performance levels that make them very competitive. It has come to the point that the California Energy Commission has predicted windpower will be that State’s lowest cost source of energy in the 1990s, beating out even large-scale hydro.

We are not quite there. We have hopes.[8]

Christopher Flavin of the Worldwatch Institute has been predicting competitive viability since the 1980s. In 1984 he wrote:

Tax credits have been essential to the economic viability of wind farms so far, but will not be needed within a few years.[9]

Although wind farms still depend on tax credits, they are likely to be economical without this support within a few years.[10]

Early evidence indicates that wind power will soon take its place as a decentralized power source that is economical in many areas…. Utility-sponsored studies show that the better windfarms can produce power at a cost of about 7¢ per kilowatt-hour, which is competitive with conventional power sources in the United States.[11]

Even after more than two decades, wind still isn’t cost-competitive and EIA predicts wind will still be 49 to 77 percent more expensive than coal and natural gas in 2016.

The wind lobby has been very effective at securing subsidies, set-asides, and favorable tax treatment

It is not surprising that electricity production from wind has expanded recently. Wind turbine designs have improved, but wind remains very expensive and as this list of subsidies, tax credits, and set-asides shows, the American taxpayer is footing the bill for the wind’s expansion. Even after decades of financial support, electricity from wind still only supplies 1.3% of all electricity generated in the US.

The promoters of wind point to Denmark as an example the United States should emulate. But as the Danish wind study shows, Denmark wind’s production is not directly replicable by the United States. The Danish wind experiment also shows that generating electricity from wind is an expensive way to create jobs or reduce carbon dioxide emissions.

Which leads to a final thought: If wind power is everything that proponents say it is, then why can’t it exist in the marketplace without government subsidies, government mandates, government tax credits, guaranteed market share in the form of government enforced feed-in tariffs, and backup generation from more reliable energy sources such as hydropower or natural gas?