In the United Kingdom, electricity demand reached its highest levels on January 19, 2015, but the country’s wind turbines generated their lowest output of the season. The wind industry is one of the most highly subsidized parts of the UK economy. Yet when UK demand hit 52.54 gigawatts between 5 pm and 5.30 pm on Monday, January 19, wind contributed just 0.573 gigawatts during that time–just over 1 percent of total demand.[i] On average that day, natural gas and coal each generated 35 percent of electricity demand, nuclear power generated 21 percent, and wind power generated 1.9 percent.[ii] Further, when temperatures are at subzero levels, the UK’s offshore wind farms require power from the National Grid to prevent the wind turbine blades from icing. The turbines have to idle slowly when temperatures are low to stop ice from forming and to power the hydraulic systems that turn the blades.[iii] 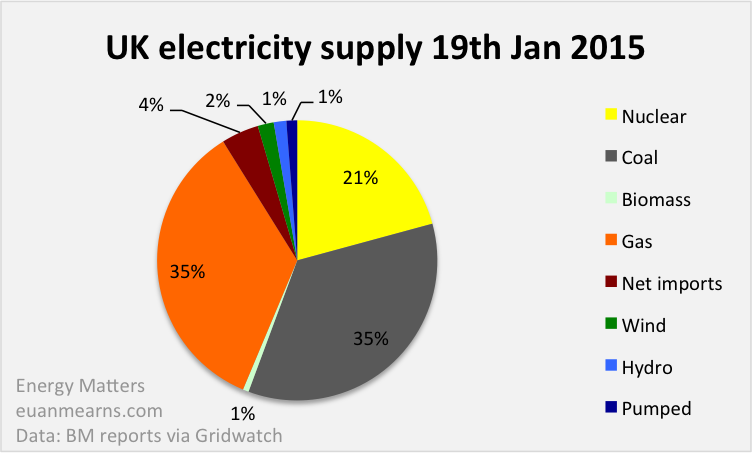 Clearly, traditional, reliable technologies are needed to ensure electricity is available when needed most. On average, wind power contributes about 10 percent of the electricity used in the UK, with coal and natural gas contributing about 30 percent each and nuclear power 20 percent. Yet when it is needed most, the UK wind industry produced just under 2 percent of the nations’ power.

Monday, January 19, was the coldest day of the year, as temperatures dropped to minus 13˚C (8˚ F) in parts of central Scotland. At one point, wind production fell to just 0.191 gigawatts–effectively a zero contribution to the country’s energy needs. The UK has about 12 gigawatts of wind capacity (4 gigawatts offshore), and the wind farms are reported to operate on average at 28 percent of their theoretical maximum capacity. But when the country needed the generation the most, those turbines could not produce despite all the subsidies they have received.

For all the vast subsidies it has been given, the wind industry in the UK did not produce electricity when needed most.  While wind can contribute during some periods, its high cost to consumers and taxpayers is unacceptable given its inability to produce when needed. The UK will need to continue to rely on generation from natural gas, coal, and nuclear power for the bulk of its energy consumption, as it did on January 19th.

[i] Telegraph, Proof that the wind industry cannot be relied upon for our electricity, January 20, 2015, http://www.telegraph.co.uk/finance/newsbysector/energy/11358770/Proof-that-the-wind-industry-cannot-be-relied-upon-for-our-electricity.html

Russia Uses Devious Means to Rid the U.S. of Domestic Oil and Gas