On Saturday, September 27, the “Green Jobs Now” campaign is fielding what it calls a National Day of Action to “build the new economy.” Their goal is to repower “America with 100% clean and renewable electricity within 10 years.” The goal sounds laudable, but repowering America in 10 years comes with a hefty price tag in the form of new government subsidies, taxes and possibly even the job you hold today.

To illustrate the difficulty of repowering America with 100 percent renewable electricity in ten years, consider the graph below. This chart shows, based on data from the Energy Information Administration, the sources of U.S. electrical generation in 2007. 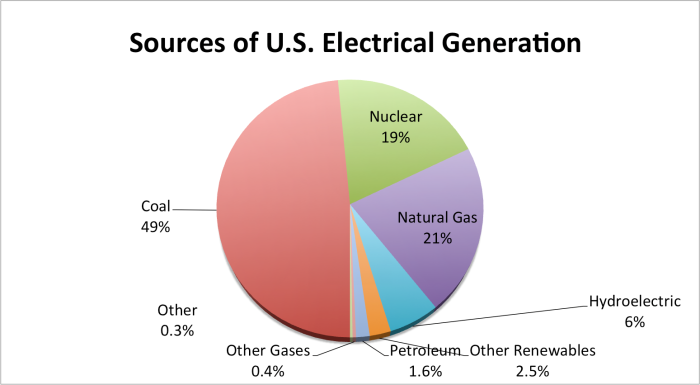 Only about 3 percent of electricity generation in America is produced by electricity that is considered renewable. And while most people consider hydroelectric power to also be renewable (which would have raised the current total to nearly 10 percent), “Green Jobs Now” proponents do not because the reservoirs behind hydroelectric dams emit carbon dioxide and methane.

IER supports a diverse portfolio of electricity generation and believes it is both unnecessary and impractical to spend billions of taxpayer dollars to help increase renewables—a 3 percent source—by over 3,000 percent in the next 10 years. No amount of wishful thinking will change the fact that the energy harnessed from wind and solar is intermittent—they only produce electricity when the wind is blowing or the sun is shining—and therefore must be balanced by more reliable and affordable sources.

Putting aside the impracticality of this goal, the Green Jobs Now campaign also makes a fundamental economic error: They are counting all of the “green” jobs that will be created by new government spending and regulations, but they are ignoring the jobs that will be lost in the process. Indeed, a recent study commissioned by IER found the proposed repeal of the Section 199 domestic manufacturing tax deductions for oil and gas companies would cause more than 600,000 job losses over ten years.

The real economic objective isn’t just jobs per se; what Americans really desire are high-paying jobs with security. Such quality jobs can only be provided in a free market, where workers produce goods and services valued by customers.

But high-paying, secure jobs cannot be provided by the government, once all the effects of its programs are taken into account. What the government gives with one hand, it takes away with the other. For example, it is true that a tax credit for hybrid cars may spur job growth in specialized areas.

But how does the government pay for this tax expenditure? If it raises taxes elsewhere—perhaps by installing a cap & trade system—then those industries facing the tax hike will lay off workers. And if the government simply borrows the difference, then the budget deficit will rise, pushing up interest rates and reducing business investment. Either way, the hybrid tax credit won’t increase the total number of jobs in the economy. Much worse, workers will now be employed in areas where they are less productive and total output will fall, meaning everyone is materially poorer than before the policy shift.

This last point is easy to illustrate by taking it to extremes: Imagine that the government raised income taxes, and then used the extra money to pay one group of 100,000 workers to dig ditches, while it paid another group of 100,000 workers to fill the ditches back up. These groups could continue day in, day out, so long as the government kept redirecting funds out of taxpayers’ wallets and into the pockets of the ditch diggers (and filler uppers). But clearly the U.S. standard of living would be lower, because those 200,000 workers could have been doing something more productive with their time, rather than doing nothing useful in order to qualify for the government checks.

The pattern holds for “green” jobs fostered by government interventions. If it really made economic sense for thousands of workers to flow into, say, hybrid car production or wind power generation, then market prices and wages would guide the adjustment. Car manufacturers would see big profits on their hybrid models, and would expand output and bid up wages to attract workers.

However, it currently does not make economic sense to devote millions of workers to the favored energy sources of the moment. These alternative technologies still have many hurdles to overcome, before becoming competitive with coal, oil, natural gas and nuclear power. Government interventions can force the workers to shift, but these actions won’t change the underlying economic realities. If workers move from industries that pass the market test, into industries that need to be propped up by government policies, then the overall economy is less productive. Americans will see a drop in their material standard of living.

Our economy runs on natural gas, coal and oil because they are currently the most economical way to deliver affordable and reliable energy to serve Americans. At some point in the future, it may become profitable to make the switch, but in the meantime, government efforts to promote these pet technologies will make Americans poorer.

The “Green Jobs Now” campaign is calling for “a multi-billion dollar national investment from Washington and Wall Street” in order to “build the new green economy and solve the climate crisis” at the same time. But they neglect to add the part about how this grandiose plan would have serious economic consequences. If it really made economic sense to displace workers in the energy fields today for the “green” energy fields of tomorrow, then the laws of supply and demand would already be paving the way.

The Financial Incentives Behind the Pickens Plan