While politicians hawking policies supporting green energy warn that China is overtaking us in that race, many forecasters and analysts think China’s green energy future is a myth. While China is putting more money into green energy technologies than the United States, it is doing so for reasons other than securing a green energy future. Rather, it is investing in order to export technology to developed countries promoting green technologies, like the United States and Europe. The laws, policies, and subsidies in the United States and Europe are creating a renewable market for China. For China’s own electric generation program, it is robustly building coal-fired generators, currently getting 80 percent of its electricity from coal-fired generation. Coal is expected to generate more than 60 percent of the country’s electricity for the foreseeable future.

China’s growing economy demands energy to fuel it. In the first seven months of 2011, electric power consumption increased 12.2 percent from last year’s levels.[i] That 12 percent generation increase compares to less than a one percent increase in generation levels in the United States for the first 5 months of this year.[ii] Forty-one gigawatts of new generating capacity in China helped to meet that higher generation level, consisting of 27.7 gigawatts of coal-fired capacity and 7.7 gigawatts of hydroelectric power. 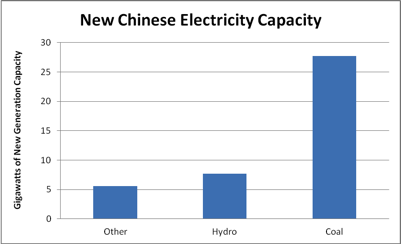 According to the newspaper The Australian, for every obsolete coal-fired plant that China dismantled over the past three years, 2 new coal-fired plants have been built.[iii] And this pace is expected to continue. The Energy Information Administration (EIA), in its International Energy Outlook 2011[iv], expects China to build 1,020 gigawatts of generating capacity between 2008 and 2035, of which almost half (48 percent) is expected to be coal-fired. The International Energy Agency (IEA) is forecasting a similar build pattern of coal-fired plants for China in its new policies case. In its current policies case, it expects China to build about twice as much coal-fired generating capacity–almost 1,000 gigawatts during the same 2008 to 2035 time period.[v] 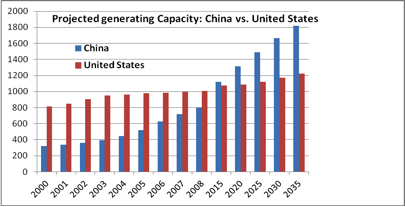 Both agencies are also bullish on nuclear generating capacity with China building an additional 100 gigawatts over the 9 gigawatts that they currently have. Some Chinese officials have announced that hydroelectric and nuclear generating capacity will make up most of the country’s targets for clean energy in their most recent 5 year plan that requires 50 percent generation from renewable sources by 2050.[vii]

The reason is that the preferred renewable generating technologies, wind and solar, have low capacity factors compared to fossil, nuclear and hydroelectric technologies. That means that wind and solar generation levels from the same amount of capacity as fossil and nuclear technologies will be much lower in comparison. So, while China currently has more wind generating capacity than any other country in the world and is expected to add over 100 gigawatts more by 2035, wind power’s share of generation will only meet 5 percent of the country’s total generation in 2035 and solar generation will not even attain a one percent share, according to the EIA. 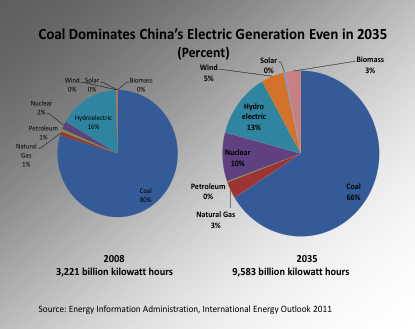 China’s policy is to undercut the market for solar cells and wind turbines in developed countries with inexpensive labor and subsidization of these industries at home. In essence, they have found another area in which their exports are demanded without needing to subject itself to the whims of clean, renewable technologies with their associated problems of intermittency, storage, transmission, and cost. A Chinese wind, turbine, for example, is one-third the cost of one manufactured in Germany or Spain.[viii] Because of its ability to undercut cost, China is now the world’s largest manufacturer of wind turbines and solar panels. Further, China is the world’s largest exporter of rare earth minerals, which are needed in the manufacture of these renewable technologies as well as in hybrid vehicles, cell phones, and energy efficient light bulbs. China supplies about 95 percent of the global market for rare earth minerals.[ix] High-technology manufacturers are finding it difficult to operate anywhere but in China due to China’s tightening of rare earth supplies and creating higher prices through heavy taxes and other export controls.[x]

While China’s gross domestic product has been growing at about 10 percent during the past five years, its consumption of coal has been increasing at a faster rate–about 17 percent each year– and its coal production has been increasing by more than 20 percent. Over the past three years, investment in the Chinese coal industry has been increasing between 30 percent and 50 percent a year.[xi] With those coal statistics it is no wonder that China is the largest emitter of carbon dioxide in the world. 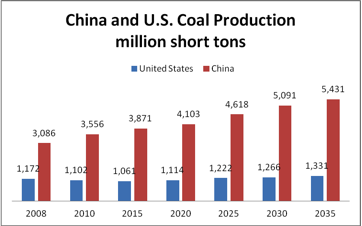 China’s goal is to make a better life for its citizens and to increase its economy by supplying goods to the global marketplace. To do that, it needs energy, and to China, it does not matter whether it is coal, oil, natural gas, nuclear, or renewable energy. China has become the world’s largest manufacturer and exporter of wind turbines and solar panels for which demand is being created solely by U.S. and European government policies.  They are making these products primarily with coal fired electricity, and they have no intention to make non-hydro renewable energy generation a significant part of their overall energy consumption for decades. The trendy belief that China is switching to renewables for its electricity generation is a myth. Coal is, and will continue to be, China’s dominant source of electricity generation for a long time into the future.

[iii] The Australian, The greening of China a mirage, September 19, 2011, http://www.theaustralian.com.au/national-affairs/opinion/the-greening-of-china-a-mirage/story-e6frgd0x-1226140342005

[viii] The Australian, The greening of China a mirage, September 19, 2011, http://www.theaustralian.com.au/national-affairs/opinion/the-greening-of-china-a-mirage/story-e6frgd0x-1226140342005

Cuba Not Afraid of Offshore Oil