Countries are finding that offshore wind is not only expensive, but noisy too. Brazil, the world’s eighth largest producer of wind power, has erected wind turbines off its Atlantic coast where the wind blows consistently and the noise is constant. Recently, officials in Massachusetts and Rhode Island announced contracts for two large offshore wind farms off Martha’s Vineyard. Massachusetts is planning to build an 800-megawatt wind farm with over 100 turbines about 15 miles south of the Vineyard. And Rhode Island officials plan to build a 400-megawatt wind farm northwest of the Vineyard Wind project that is planned by Massachusetts. The wind developers are rushing the projects to benefit from a federal tax credit for offshore wind projects before it expires in 2020. As with other offshore wind projects, fishermen are wary of the detrimental impacts that the wind turbines, the associated subsurface cables and the subsequent noise will have on their livelihood. 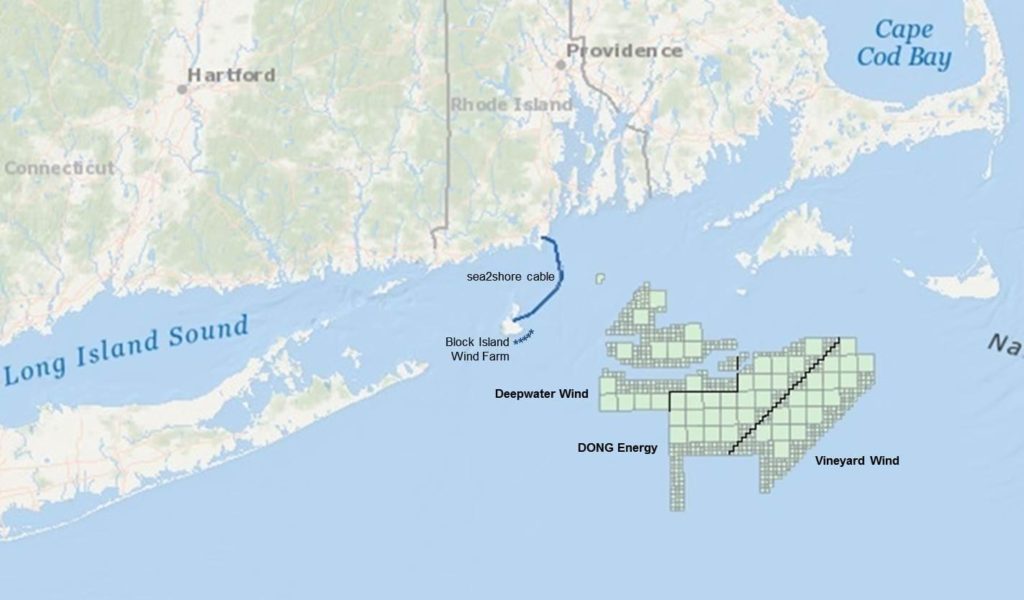 Massachusetts’ 800-megawatt Vineyard Wind project is the largest single procurement of offshore wind power of any state. Construction on the project is expected to start next year, with the first turbines connecting to the grid in 2021.  This project will provide about half the level of offshore wind that Massachusetts state energy law calls for– 1,600 megawatts of offshore wind by 2027. Vineyard Wind plans to run its underwater transmission line along the channel between the Vineyard and Nantucket, crossing the sound and connecting to the mainland on Cape Cod.

The Massachusetts Clean Energy Center spent $113 million dredging the harbor and expanding and reinforcing a 29-acre marine commerce terminal. The state agency is preparing the harbor and terminal so that components of wind turbines that are up to 600 feet high and several tons of weight can be loaded onto special vessels for installation at sea. The port contains hundreds of fishing boats, seafood auction houses and processing plants that could be in jeopardy due to the wind farm.

The winning bid came not from a U.S. firm, but as a joint venture of Copenhagen Infrastructure Partners, a Danish renewable energy investment firm, and a subsidiary of Iberdrola, a Spanish utility.

According to Massachusetts officials, it is too early to disclose the project’s cost. According to the Energy Information Administration, the levelized generating cost of an offshore wind turbine runs 13.8 cents per kilowatt hour—the second highest cost technology that the agency considers and more than double an onshore wind turbine and almost 3 times the levelized cost of a combined cycle natural gas plant. Electricity prices in Massachusetts are already one of the highest in the nation, averaging 18.92 cents per kilowatt hour for residential customers during 2017.

Massachusetts also wants to increase hydroelectric power and to build a power line through Maine to import electricity from Canada.

In Rhode Island, the Revolution Wind project would be located about 12 miles southwest of the Vineyard and consist of about 50 wind turbines. It would be over 10 times the size of the Rhode Island’s current 30-megawatt Block Island wind farm. The developer, Deepwater Wind, will invest $250 million, including $40 million in improvements to the Port of Providence, the port facilities in the Quonset Business Park in North Kingstown and potentially one or more other ports in Rhode Island, where Deepwater would stage construction of the 400-megawatt Revolution Wind project.

As with Massachusetts’ Vineyard Wind project, the price of power from the Revolution project has not been released to the public despite the requirement for bidders to quote prices in the proposal they made in response to the procurement process.

In New Hampshire, the governor is about to sign a bill, H.B. 1550, that would require utilities to calculate, and print on people’s power bills, the cost of complying with the state’s renewables targets.  Retail customers would see that number once a year on their power bills. It would be stated on a per-kilowatt-hour basis. According to Governor Sununu, “New Hampshire’s ratepayers are entitled to understand the factors driving some of the highest electric rates in the nation.” The average retail price of electricity in New Hampshire in 2017 was 16.16 cents per kilowatt-hour, well above the U.S. average of 10.54 cents per kilowatt hour.

New Hampshire is considering deceleration of renewables, seeing them as an expensive luxury. State lawmakers are looking to cap or reduce the state’s renewable portfolio standard, which requires about 25 percent of electricity generation to come from renewable energy by 2025. They are also questioning the state’s participation in the Regional Greenhouse Gas Initiative as a burdensome cost.

Last year, New Hampshire generated about 10 percent of its electricity from hydropower, solar and wind and another 10 percent from biomass, according to Energy Information Administration data. Last month, Governor Sununu put out a 10-year energy strategy saying that controlling costs needs to be policymakers’ overriding goal. According to Sununu’s energy strategy, renewable energy should have to compete on price, without the support of taxpayers or ratepayers.

Brazil ranks eighth in the world in wind-generated power with 12,763 megawatts. The country is building offshore wind farms in the Atlantic Ocean where both the wind and noise are fairly consistent. One of Brazil’s offshore wind farms is a mile from the beach where the view and the noise is a constant reminder to the residents in the area. Investors in Brazil’s offshore wind industry are cautious, however, as the construction of transmission lines is slow, and poor infrastructure increases the price of imported parts. Further, lawmakers are proposing a tax on wind- and solar-generated power as the government plans to profit from their generation.

Massachusetts and Rhode Island have some of the highest electricity prices in the continental United States. Yet, the policymakers there want to increase those prices by erecting offshore wind turbines that are expensive and noisy and most likely a detriment to the fish habitats in the area. While the policymakers in those states believe that the offshore wind farms will decrease carbon dioxide emissions, data show that while renewable generation has increased worldwide, so too have carbon dioxide emissions, reaching an historic high in 2017. Only the policymakers in New Hampshire are realistic regarding the cost of renewable energy technologies, considering them luxuries.  New Hampshire electricity consumers will be the beneficiaries of this new policy of transparency regarding the real costs of renewable energy deployments, while other states in the region will not even release the price of the electricity from these offshore wind sources that they are forcing consumers to buy.