Massive solar power plants and wind turbines are killing birds and bats in large numbers, but the Obama Administration is not disturbed. In Appalachia, the administration imposes strict standards on the amount of salt in streams below coal mines because it may (or may not) have an adverse effect on mayflies and other flies, but hundreds of thousands of birds and bats are killed every year by solar and wind facilities and the Obama administration shrugs it off.   In fact, they give permits to companies to do so.

A wind facility in Nevada is killing 3 times the number of bats allowed under an agreement by Obama Administration regulators and massive solar facilities are incinerating up to an estimated 28,000 birds per year using sophisticated solar technology. The Obama “administration has made clear that they’re not going to let a few whimpering hippies stand in the way ofprogress.”[i] To the Obama Administration, wind and solar power, no matter what the cost is progress.

BrightSource Energy has a large solar power plant in the Mojave Desert where Federal wildlife investigators watched birds being roasted by the concentrated sun rays from the plants’ mirrors and then fall to the ground. Birds that fly through the plants’ concentrated sun rays are called “streamers,” referring to the smoke plume that comes from birds that ignite in midair. On average, there is one “streamer” every two minutes. The streamers have caused investigators to prompt California officials to halt Bright Source’s application to build a still-bigger solar plant until the full extent of the deaths is assessed. BrightSource claims that bird deaths are about a thousand a year, but an expert for the Center for Biological Diversity environmental group estimates them at 28,000 per year.[ii] 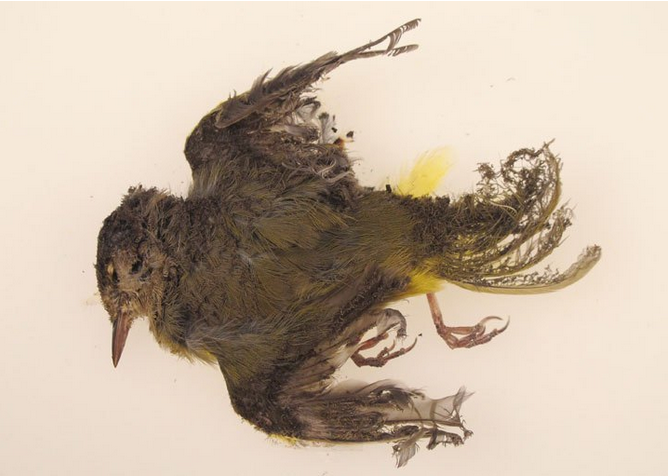 The bright light from the plant acts as a “mega-trap” for wildlife that attracts insects, which in turn attract insect-eating birds that fly to their death in the intensely focused light rays. The birds also die because they collide with the mirrors that reflect the blue sky which they mistake for water – something all creatures seek out in a desert environment. Sun rays produced by the mirrors also are a hazard to pilots flying in and out of Las Vegas and Los Angeles who are blinded by the glare from the mirrors.

BrightSource’s solar power plant is located at Ivanpah Dry Lake near the California-Nevada border. It formally opened in February and is the world’s biggest plant to employ “power towers”. The plant cost $2.2 billion to build, with most of the money coming from a Department of Energy loan, and sizable investments from NRG Energy and Google.[iii]  Over 300,000 mirrors spread across 3,500 acres, each mirror about the size of a garage door, reflect solar rays onto three 459-foot boiler towers. The boilers heat water to produce steam, which turns turbines that generate electricity. The method is called “solar-flux”; temperatures from the heat flux are up to 800 degrees Fahrenheit.[iv]

BrightSource has plans to build another solar plant in Palen California that is expected to be twice the size of Ivanpah. The proposed tower would produce a flux area that would be more than three times as large as the existing towers at Ivanpah. It would also be on a flight path for birds between the Colorado River and the Salton Sea, California’s largest lake, which has more avian life than the Ivanpah plant, including protected golden eagles and peregrine falcons and more than 100 other species of birds. The proposed new tower is estimated to be almost four times as dangerous to birds as the Ivanpah plant. The Palen Solar Power Project is currently in front of the California Energy Commission.[v]

BrightSource is proposing to pay $1.8 million for anticipated bird deaths at the proposed plant for programs to spay and neuter domestic cats, which supposedly kill over 1.4 billion birds a year. But that, of course, does nothing to protect the desert birds at the proposed site.

Ivanpah Does Not Have Sufficient Sun Power; Needs to Burn Natural Gas

Ivanpah uses natural gas to keep the water hot when there is not enough sun to do so. Bright Source Energy is petitioning the California government for permission to burn more natural gas that would emit 94,749 more tons of carbon dioxide per year–the equivalent of emissions from about 16,500 automobiles. If approved, the plant will produce about 35 percent of its electricity from fossil fuels.

According to the U.S. Energy Information Administration (EIA), solar thermal is the most expensive electricity generating technology. EIA indicates that the levelized cost of a new solar thermal plant averages 24.31 cents per kilowatt hour and could be as high as 38.8 cents per kilowatt hour.[vi] The average solar thermal plant cost is more than double the average cost of electricity in the United States. These plants will increase rates for the people of California, who are already paying electricity rates that are the 9th highest in the nation.

A White Pine County, Nevada wind farm has been forced to change operations after its massive turbines killed triple the number of bats allowed under an agreement with federal regulators. The 152-megawatt Spring Valley Wind Energy project located about 260 miles northeast of Las Vegas killed an estimated 566 bats in 2013. In order to reduce the number of deaths, the plant operator agreed to change the operation of the wind turbines. The wind farm’s 66 425-foot turbines were adjusted on nights with high bat activity so they would start operating when sustained winds reach about 11 mph instead of the usual start up of 7 mph.

Spring Valley is the first utility-scale wind farm in Nevada. It went online in August 2012 at a cost of $225 million. Its 66 turbines cover 7,600 acres of federal land.

Because of Nevada’s Renewable Portfolio Standard, requiring 12 percent of a utility’s generation to come from renewable sources in 2010, NV Energy has agreed to purchase wind energy produced from the Spring Valley project.

Through agreement with federal regulators and the Spring Valley wind farm, bird deaths are limited to 178 per year and bat deaths to 169 per year.

As many as 3 million Mexican free-tailed bats roost in Rose Cave, about five miles from the wind farm, on their southern migration to Central America.  At peak times in August as many as 2,000 bats per minute leave Rose Cave. The tips of wind turbine blades can reach 170 mph, which can be deadly for a bird or bat because sudden changes in barometric pressure cause their insides to explode even if the blade does not touch the bird or bat.[vii]

Spring Valley reported 40 bird deaths last year, below the agreed upon limit. The federal government has been reluctant to prosecute illegal eagle killings at wind farms. In December, the Interior Department exempted wind farms from penalties associated with bald and golden eagle deaths for up to 30 years, provided companies obtain permits and make efforts to avoid killing protected birds.

The 30-year rule replaced an earlier rule implemented in 2009 to cover eagle deaths for up to five years. Because the administration showed little interest in penalizing wind farms for killing eagles, no company ever applied for the five-year permits. Because of a golden eagle death at Spring Valley in February, the wind farm applied for a 30-year eagle permit this year. The permitting process is expected to last into 2015.

The urgent political quest for clean energy brings with it environmental harm including bird and bat deaths from solar and wind power that federal regulators seem to ignore. In fact, the government allows for a 30-year permit to kill protected eagles at wind farms that has superseded an initial 5-year permit. Because the federal government never took action for the killings, no company ever applied for the 5 year permit. But, the federal government is quick to take action if other energy industries cause bird deaths. In Appalachia, coal companies are penalized for potential impacts to flies due to salinity in streams. Oil and gas companies are fined millions of dollars each year for the deaths of protected birds that land and subsequently drown in their waste pits, and power companies are prosecuted when birds are electrocuted by their power lines.[viii] The Obama administration turns a blind eye to environmental harms if the harms come from wind and solar.  They have apparently chosen wind and solar power as their “winners,” despite the fact that birds and bats – not to mention energy consumers — are coming up as the losers.

[viii] The Hill, Republican: EPA ‘rewards it friends and punishes its opponents’, May 15, 2013, http://thehill.com/blogs/floor-action/house/299917-republican-epa-rewards-its-friends-and-punishes-its-opponents#ixzz2TSbUcIRh

The GAO’s Whitewash on the Social Cost of Carbon

The Story of Electricity