The Department of Interior just leased two tracks off the coast of Ocean City, Maryland to a wind developer. When the wind facility is built, it will cost Maryland residents higher electricity bills due to the exorbitant cost of offshore wind. Residential customers will see up to $1.50 more a month in their bills and corporations can expect a 1.5 percent monthly surcharge once the wind turbines are up and running. But that won’t be for quite a while given the steps that are needed before construction can begin.

For over a decade, Cape Wind, off the coast of Cape Cod, Massachusetts, has been trying to get off the ground with sufficient buyers and investors to start construction of its 130 wind turbines. Now, Maryland, with support from its Governor and other politicians, also wants to build wind units off the coast of Ocean City, Maryland—another major resort area. The Bureau of Ocean Energy Management (BOEM) just sold two 25-year leases for wind development off the coast of Maryland, consisting of 79,707 acres, for $8,701,098.The Maryland Wind Energy Area covers about 94 square nautical miles, roughly 10 miles off the coast of Ocean City and extending about 30 miles into the ocean.[i] The purchase was made by U.S. Wind Inc., a subsidiary of the Italian renewable energy firm, Renexia.

Maryland is the third competitive offshore lease sale made by the Bureau of Ocean Energy Management (BOEM), the bureau of the Department of Interior in charge of offshore leasing. This lease sale was more competitive than other lease sales for offshore wind power.[ii] The winning bid was more than double the amount for a similar offshore wind auction last year[iii] when a sale in July received more than $3.8 million in high bids for 164,750 acres off the coast of Rhode Island and Massachusetts. Also last year, in September, plots off the coast of Virginia received $1.6 million for almost 113,000 acres.[iv]

In 2013, Maryland state legislators passed a bill requiring power suppliers to purchase up to 2.5 percent of their electricity from offshore wind beginning in 2017. The Maryland Offshore Wind Act of 2013 describes a wind farm off the coast of Ocean City consisting of around 40 tall wind turbines.

Maryland is offering offshore wind developers billions of dollars in subsidies paid through consumer rate increases. Under the legislation, the state is providing a subsidy of up to $1.7 billion for construction of a 200 megawatt project. If the project developer meets state conditions, residential customers would pay up to $1.50 and businesses up to 1.5 percent more on their monthly electricity bills once turbines are built and operating.[v] The subsidy was a substantial inducement to the lease sale although it would underwrite only a fraction of the development cost. Maryland’s offshore wind renewable energy credit program follows a program originally developed by New Jersey, but New Jersey slowed its implementation because it found the program to be too expensive.[vi]

Before construction can begin, numerous approvals and steps are needed that will take around 6 years if all goes well. U.S. Wind’s successful bid is considered provisional until the Attorney General, in consultation with the Federal Trade Commission (FTC), completes an antitrust review of the auction process that takes place during the 30-day period following the auction. Then, U.S. Wind has 10 days to sign the leases, file the required financial assurance documentation, and pay the balance of the winning bids. After that, U.S. Wind has one year to submit a site development plan to BOEM, which describes the activities the company plans to perform for the assessment of wind resources and ocean conditions, such as the installation of meteorological towers and buoys. Once the site assessment plan is approved by BOEM, U.S. Wind will have four-and-a-half years to submit a detailed Construction and Operations Plan (COP). Then, BOEM will conduct an environmental assessment of the plan and obtain public input on the proposal from stakeholders.

U.S. Wind must also begin paying the federal government annual rent of $3 per acre, for a total of $239,121 for the two leases.

According to the U.S. Energy Information Administration (EIA), offshore wind is the second most expensive electricity generating technology. EIA indicates that the cost of a new offshore wind turbine averages 20.41 cents per kilowatt hour and could be as high as 27.1 cents per kilowatt hour.[vii] The average offshore wind turbine cost is over 3 times the cost of a new natural gas combined cycle unit and almost double the average cost of electricity in the United States.That will increase rates for the people of Maryland, who are already paying electricity rates that are higher than the national average. 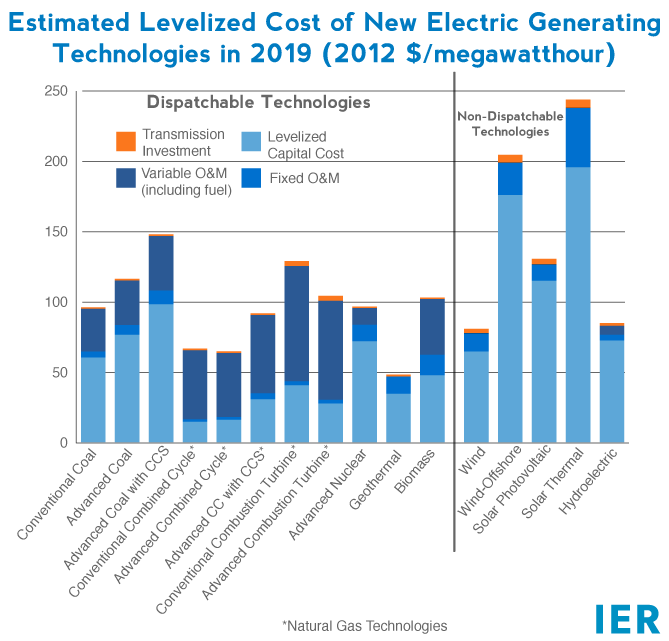 Marylanders are already paying the 15th highest residential electricity price in the nation[viii]—over 10 percent higher than the national average. Now, the state and federal governments are providing inducements for its electricity consumers to pay even higher prices by promoting offshore wind energy off the resort area of Ocean City. While supporters of offshore wind energy say that the turbines will not be a blight on the horizon, others are very reticent regarding the effect on beachgoers to the resort city. If offshore wind was cost effective, the energy marketplace would have determined it rather than politicians, such as Maryland’s, who are requiring Marylanders to buy a certain amount of expensive electricity from offshore wind. Again, in this case, consumers are being treated by politicians as guinea pigs on a green treadmill, and the economy of tourist-based Ocean City is being thrown to the winds.

The GAO’s Whitewash on the Social Cost of Carbon