Congress passed an expansion of the wind production tax credit (PTC) in the recent “fiscal cliff” legislation, but employee layoffs and wind project cancellations continue. Why? Because, as we have previously written, the market has become saturated in areas where renewable portfolio standard mandates have been reached—or more than reached—and issues surrounding the use of wind are becoming more apparent including costs, visual and noise pollution, bird kills, and havoc to other more reliable and affordable technologies due to the instability it causes to the electric grid.  U.S. energy policy as represented by the PTC’s expansion continues the “reality debt” being accrued by the government, which ultimately will have to be paid by U.S. citizens.

Last week, the Danish company Vestas announced additional personnel cutbacks at several of its Colorado facilities in spite of the PTC extension that should be sending people in the wind industry back to work. Vestas put its workers at several of their Colorado facilities on a 24-hour work week this month.[i] Further, Vestas still plans on eliminating 2,000 jobs this year reducing its work force from 18,000 to 16,000 employees by the end of the year. These job losses will occur in several countries including the United States. According to a company statement, “The extension of the PTC does not affect Vestas’ projections to deliver about 5 gigawatts this year and to employ about 16,000 people by the end of 2013.”[ii]

Iberdrola Renewables, a Spanish company, has confirmed that it will no longer pursue developing a wind farm in Hammond, New York. Further, a spokesperson for the company indicated that Iberdola is cancelling 100 wind projects in the United States.[iii]

Congress extended the production tax credit for wind for ‘one year’ in the ‘fiscal cliff’ bill that passed January 1. The credit provides 2.2 cents per kilowatt hour for electricity generated for the first 10 years of operation of the wind unit. Therefore, if wind investors are eligible to receive the PTC, they get it for 10 years in a row. While the original PTC stipulated that the wind unit must begin operation in the year of the credit, the extension that was passed only indicates that the project must begin construction in the initial year and that the unit has 2 more years to become operational. According to Senator Udall, “So if you put a shovel in the ground on Dec. 31, at the end of this year(2013), the tax credit will apply, in effect a two-year extension, and some might argue it would take the form of a three-year extension because some projects take more than a year” to get off the ground.  It is therefore a significant expansion of the current law.

The wind industry is hoping that the Obama administration defines beginning “construction” very loosely; even more loosely than when Sen. Udall suggested they would qualify by putting a “shovel in the ground.” According to Politico, wind developers hope the federal government follows the Department of Energy’s example in the 1603 grant program and defines “construction” merely as when 5 percent of the total cost of the project has been invested.  According to the Joint Committee on Taxation, the expansion of the qualifying criteria for the PTC means that the credit will cost taxpayers over $12 billion over 10 years, or over a billion dollars per year.

Xcel Energy, which is one of the top 10 biggest utilities in the country and had the largest wind capacity of any utility in 2011, is concerned that the PTC helps wind developers to the exclusion of customers. The PTC is a tax credit that goes to wind-energy developers, but does not benefit customers paying electricity bills or the utilities buying wind from renewable-energy generators.  As a result, a spokesperson for Xcel Energy indicated that the company may not buy any more wind power.[iv]

Thirty states and the District of Columbia have renewable portfolio standards (RPS) that mandate specific levels of power to be generated by qualifying renewable technologies on a given timeline, and 7 other states have voluntary goals. Since onshore wind is the lowest cost qualifying renewable generating technology, it has been the major recipient of the mandate, obtaining 90 percent of the RPS market. As the graph below shows, the PTC was first passed in 1992, but it did little to generate interest in the wind industry in the 1990s. Once Texas introduced its RPS in 1999 and most other states followed between 2004 and 2007, wind construction began to take off. 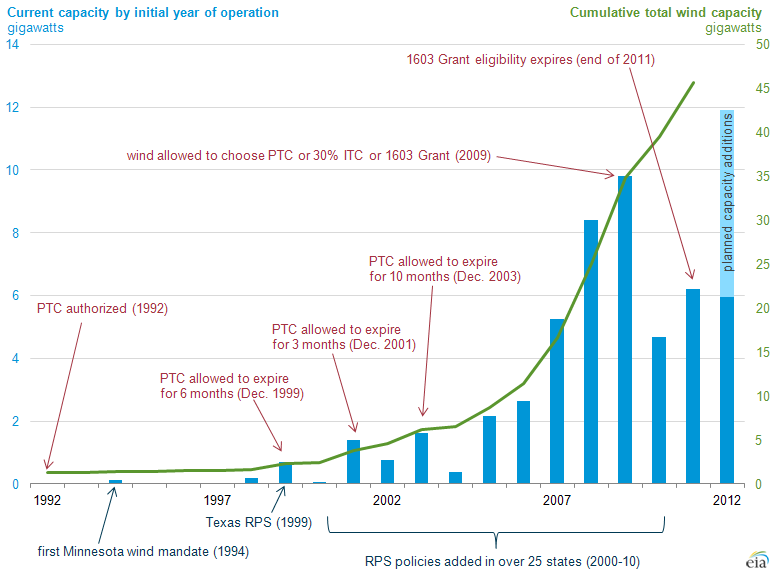 The importance of the RPS compared to the PTC can be seen from NextEra Energy Resources, a major wind developer, in its most recent Third Quarter earnings report, “we signed our first PPA for 2013 U.S. wind project, a project that is not dependent upon extension of the PTC program…we see it as supportive of the view we have publicly expressed that there will continue to be a wind development business in the U.S. post-2012 even if the PTC program is not extended.”[v]

Adapting wind power into the electric grid is one of the main issues facing it and other sources of intermittent renewable energy generation. Power plant and electric grid operators consistently attempt to match electricity demand, i.e. what people’s TVs, appliances, computers, and other electronic devices need, and the output from their generators. Because wind and solar energy are “unpredictable” sources of electricity, i.e. the amounts of electricity they produce are consistent only with wind speeds and the degree of sunlight received by panels, other sources of generation must be used to back-up these intermittent sources. This can cause havoc to baseload generators that have to pay fines when they cannot scale down their generation when the wind does blow, or hydroelectric power units that face issues with salmon and other fish runs if required to adjust their output when wind does produce.   Hydroelectric dams are the largest renewable energy source for electricity in the United States.

Where natural-gas fired technology is available, the back-up power issue is less onerous, but the amount of wind power on-line now is stretching beyond our natural gas-fired generating capacity to serve as back-up in some areas of the country, resulting in coal or nuclear units being asked to ramp up or down according to wind production.

Intermittency is not the only issue. Noise pollution is bothering residents who live near wind farms. For example, a couple had to abandon their home near Denmark, Wisconsin, because of the unbearable low-frequency noise produced by a half-dozen wind turbines that were built near their home. Shortly after the turbines began operating, the couple began experiencing numerous symptoms, including “headaches, ear pain, nausea, blurred vision, anxiety, memory loss, and an overall unsettledness.”[vi]  Wind shadow flicker has also caused concern in Wisconsin where the turning of the blades is causing shadows that “flicker” removing sunlight at intermittent periods. And, in Maine, local residents have complained about noise, low frequency sound pressure and vibrations that turbines and their blades make under various wind conditions due to insufficient setback distances. Setback distances are based on safety guidelines from the turbine manufacturer.[vii]

Wind turbine blades have killed birds and bats that have come within their path. For example, conservation groups have asked the Fish and Wildlife Service to reduce birds and bats being killed at the 28-turbine Criterion Wind Project, located near Oakland, Maryland, about 175 miles northwest of Washington, D.C. It is believed that this wind farm ranks as the deadliest to birds and bats in the United States on a per-turbine basis. Because bats eat insects that are agricultural pests, bat losses at wind projects are detrimental to agriculture resulting in farmers either suffering agricultural losses or having to use more insect-controlling poisons on crops. Neither option is appealing or economic.[viii]

While bird, bat and other wildlife deaths are a factor in wind production, wind power actually gets an indirect subsidy from being exempt from enforcement from wildlife laws. According to energy expert Robert Bryce, “Despite numerous violations, the Obama administration—like the Bush administration before it—has unofficially exempted the wind industry from prosecution under the Eagle Protection and Migratory Bird Treaty Acts. If Congress extends the PTC, federal taxpayers will, in effect, be subsidizing the killing of federally protected birds.”[ix]  Obviously, wind power – like all energy sources — is neither free nor without impacts, despite claims that it is both by supporters.

Thanks to President Obama as well as Senators John Thune, Chuck Grassley and other wind electricity supporters, the production tax credit got a reprieve, costing taxpayers over $12 billion for a ‘one year’ extension for a tax credit that has been around for 20 years and should have already accomplished its job.[x] But, unfortunately, to taxpayers, the expense of the PTC was not needed since another policy implemented by over half our states is driving most of the wind capacity additions. That policy, the RPS, is completely disconnected from market reality and cost-benefit considerations since the technologies that it promotes are not economic and are increasing the cost of electricity to consumers.  The mandate requiring a certain amount of energy be purchased from such sources is prima facie evidence of its disconnection from costs and markets.

But, regardless of the PTC extension, wind power is reaching a saturation point for the next several years as some RPS’ are exceeding their mandates and wind companies are laying off personnel and cancelling projects as in the case of Vestas and Iberdrola. We can thank the President and Congress for here again spending our money foolishly on policies that drive up energy costs, destabilize the electric grid and simply do not make sense.  Ultimately, the “reality debt,” like the fiscal debt, will have to be repaid.