WASHINGTON – Today, the Institute for Energy Research released the most comprehensive study to date of the impacts of federal wind subsidies across all U.S. states. IER analysts found that from 2005 to 2014, the cumulative subsidy allocations from the PTC, ITC, and Section 1603 to the wind industry are at least $18.58 billion.

The study also found that over the last decade, taxpayers in 30 states and the District of Columbia paid more in taxes to the federal government to support wind subsidies than wind producers who own wind facilities in those states received in subsidy allocations. 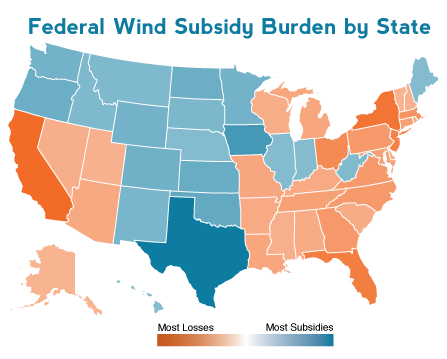 Although the report discusses states and regions in terms of net losses and net subsidies to show the geographical distribution of federal wind subsidies, we note that the ultimate recipients are actually the owners of wind facilities, while losses accrue to all Americans who pay federal taxes. In other words, subsidies to wind producers come at the expense of all U.S. taxpayers.

Other key findings include: