The Institute for Energy Research (IER) is committed to free-market policy solutions for America’s energy needs. IER has repeatedly argued that reducing the federal government’s intervention in the energy sector would reduce prices for consumers and, especially in our current recession, would create thousands of good jobs for unemployed workers.

In this context, a recent opinion piece on FoxNews by Steve Lockard—CEO of a company making wind turbines and a board member of the American Wind Energy Association—was quite ironic. Lockard was trying to appeal to conservative readers by claiming that the Congress was threatening to destroy American jobs through tax hikes, and that even Ron Paul agreed this was a violation of the free market. Let’s go through Lockard’s claims to get the real scoop on the inefficiency of wind power.

Lockard on Wind Power and the Market

To set the stage, we’ll quote extensively from Lockard’s piece:

Our industry can do the same in hard-hit towns all across the U.S., if Congress will let us and doesn’t increase taxes on wind power in the New Year.

What is happening in Newton is happening all across the country, although many people don’t realize it. Wind energy is a market that the U.S. is winning.

These economics are driving a surge in wind manufacturing. Over the last six years, U.S. domestic production of wind turbine components has grown 12-fold, to more than 400 facilities in 43 states. This has helped shift manufacturing jobs from overseas back to the U.S.

All that is needed is Congressional action to keep the tax rate stable and low on this homegrown American energy source. That is why extending wind’s federal Production Tax Credit (PTC) is so important. If Congress raises taxes on wind energy by letting this tax rate expire in 2012, many of the good U.S. manufacturing jobs we’ve been able to create will evaporate.

Presidential candidate Ron Paul visited our factory himself in October. He told reporters in our conference room that, “As a believer in the free market, I don’t look at a tax credit as a subsidy.”

Now if Congress will let us finish the job, wind energy can do for America what we have already done for Newton, Iowa: Create U.S. manufacturing jobs right here at home.

Lockard’s piece is a great PR effort, making three basic claims that would appeal to Fox readers: (1) Wind power can fuel job growth out of the recession. (2) Congress is threatening to abort this recovery by raising taxes on wind power. (3) If Congress would just mind its own business, the free market would support a massive expansion of wind power.

Unfortunately for Lockard, these claims are either very misleading or downright false.

Wind Power Is a Tiny Fraction of the Energy Sector

Lockard’s talking points make it sound as if wind power is poised to take over the energy scene. But like Paul Krugman’s similar remarks about solar power, these too are unsubstantiated.

According to the Energy Information Administration, in 2010, wind power accounted for 0.9 percent of the energy used in the United States. 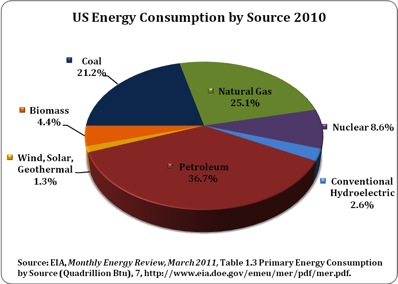 Yes, it’s easy to achieve large rates of growth in the wind sector, when starting from such a low baseline. The EIA projects that wind will only produce 3.1 percent of electricity by 2035, up from 2.3 percent in 2010. Because of higher costs and the tremendous problem of intermittency—the wind doesn’t always blow—wind power is nowhere near a position to fuel an economic recovery.

When Lockard speaks of “raising taxes” on wind power, it’s not the same thing (say) as proposals to raise marginal income tax rates on the rich. Rather, he refers to the expiration of the federal production tax credit (PTC) that wind currently enjoys.

The PTC for wind was first introduced as part of the Energy Policy Act of 1992. It was defined as a 1.5-cents-per-kilowatthour payment (adjusted annually for inflation), available for 10 years to investors for facilities placed in service between 1994 and June 30, 1999. The PTC for wind has expired and been reinstated several times since its origination. The Emergency Economic Stabilization Act of 2008 (Public Law 110-343) signed on October 3, 2008 extended the PTC to 2.1-cents-per-kilowatt-hour through 2012. The $787 billion economic stimulus President Obama signed into law in February 2009 made a 30 percent investment tax credit available in lieu of the production credit.[1] The Obama Administration also instituted the section 1603 grant program where the 30 percent investment tax credit could be taken as an immediate rebate rather than used against taxes, but that program expired in 2011.

Now it is true that other forms of energy receive federal tax preferences. However, when calculating the implicit “subsidy” in terms of dollars per unit of energy delivered, the relative advantage isn’t even close. For example, total federal subsidies in fiscal year 2007 were $23.37 per megawatt hour for wind, compared with $0.44 for conventional coal and $0.25 for natural gas and petroleum liquids.[2] In fiscal year 2010, they were even higher. Wind’s subsidies amounted to $56.29 per megawatt hour, while the figures for coal, and natural gas and petroleum liquids, were tied at a mere $0.64.[3]

In addition to the federal tax advantages, wind power also enjoys mandated usage in various’ states Renewable Portfolio Standard (RPS) frameworks. What happens here is that a given state will mandate that utilities must generate a certain percentage of electricity from “renewable” sources, and it is often cheapest to comply with the mandate by using wind power. (However, we note that many states are not in compliance with their own RPS.)

Tax Credits and the Free Market

By citing Ron Paul’s views on tax credits, Lockard tries to equate a blossoming wind sector with the “free market.” However, this is quite misleading. Ron Paul was making a principled distinction, based on libertarian views of property rights, between an actual government spending subsidy versus a tax credit (which simply subtracts from a company’s tax payment owed to the government). Paul’s point was that any revenues a wind company gets from its customers are the property of the company, and so it shouldn’t be considered a “government subsidy” if that company is allowed to retain more of its own money through a tax credit. (In contrast, a bona fide subsidy would involve a person or company receiving a net transfer of tax dollars to achieve some goal that the government wanted to promote.) This is what Ron Paul meant by saying that he supports the free market and therefore doesn’t consider a tax credit to be an actual government subsidy.

Yet Lockard shouldn’t leap to the conclusion that wind power is therefore a creature of the free market. Really what we’re seeing is that if the government mandates the use of wind power, and keeps taxes relatively low on wind power, while heaping much larger taxes on conventional energy sources, then wind power can survive, albeit still being confined to a small niche.

Lockard implicitly gives away the game when he says that removal of the tax credit would devastate the wind industry. By the same token, if the government kept the wind PTC, but extended the same credit to every other energy source, then the wind sector would also collapse. This is because—with current technologies and the state of our energy infrastructure—it is more efficient to have the vast bulk of US energy produced by conventional sources, rather than wind.

Although he made a clever effort to appeal to conservative readers through rhetoric of job creation and tax hikes, Steve Lockard hides the plain fact that in a level playing field—i.e. a true free market—wind power will only constitute a small niche for the foreseeable future. It is only growing at its current rate because of a massively unfair playing field of federal tax advantages, subsidies, and state mandates.