EPA’s rule is very contentious for a number of reasons, including the fact that the way EPA set up the rules makes it much easier for some states to comply with the rules than for other states. But more importantly, even though EPA says that global warming is a problem and is the reason for promulgating this rule, the rule itself will result in a miniscule amount of warming averted. In fact, according to EPA’s climate model, the rule would only reduce global temperatures by 0.018 degrees Centigrade by 2100, while raising electricity prices and costing jobs.

Here are interesting takeaways from the testimonies:

The Chair of the Regional Greenhouse Gas Initiative (RGGI) thinks that RGGI has had a “positive impact on ratepayers,” even though electricity rates have increased more in RGGI states than non-RGGI states

One of the people who was asked to testify was Kelly Speakes-Backman, Commissioner of the Maryland Public Service Commission and Chair of the Regional Greenhouse Gas Initiative. A large part of her testimony was devoted to defending RGGI. RGGI is a program in Northeastern and Mid-Atlantic states that caps carbon dioxide emissions from power plants.  RGGI is important in the context of the rule because EPA’s regulations cite RGGI as one way to help comply with the regulation’s carbon dioxide (CO2) reduction requirements. 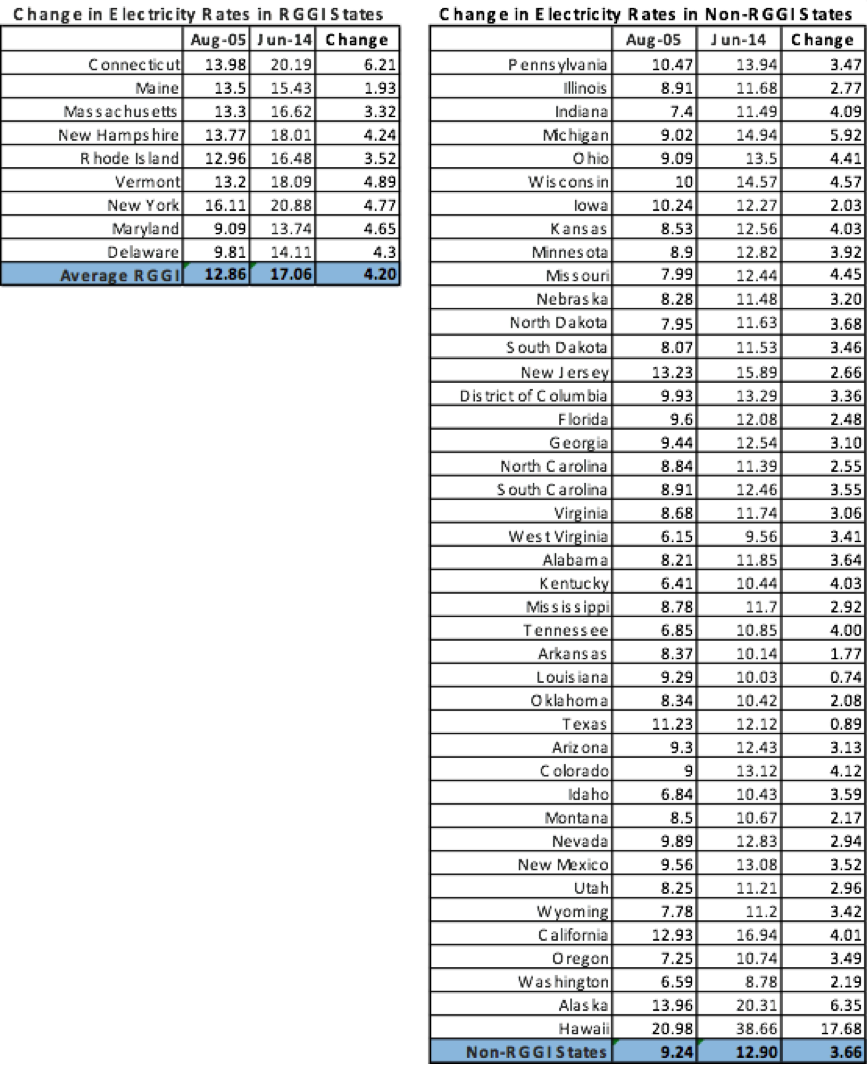 As the chart below shows, electricity rates in RGGI states are higher than average in all RGGI states. 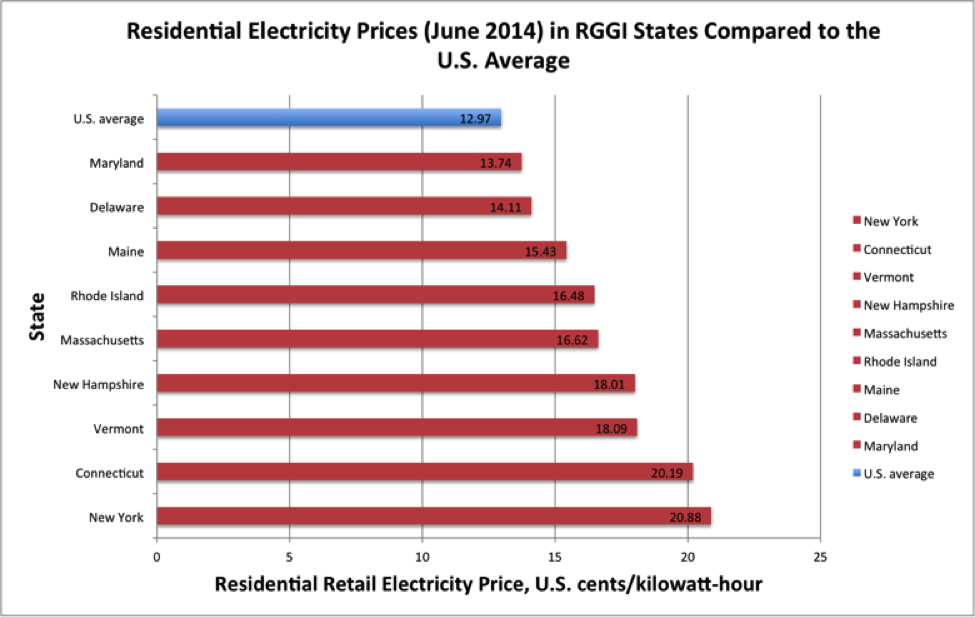 Has RGGI really been responsible for carbon dioxide emission reductions?

Speakes-Backman’s testimony also claims, “The Regional Greenhouse Gas Initiative (RGGI) states have demonstrated the successful reduction of carbon pollution, while maintaining grid reliability and having a positive impact on ratepayers and our overall economies.”

It is possible in the intervening years that RGGI is now responsible for reducing some carbon dioxide emissions. But as noted above, it has come at a cost of higher electricity rates.

Washington State might have the highest percentage reduction target for carbon dioxide emissions, but it turns out that the target can be met by closing a single plant

David Danner, the Chairman of the Washington Utilities and Transportation Commission, claimed in his testimony, “EPA assigned Washington the highest percentage reduction [of carbon dioxide] target of any state, 72 percent.”

It is true that Washington State has the highest percentage reduction target, but it is also true that it is easy for Washington to meet the target. According to Doug Steding, an environmental lawyer at Graham & Dunn, this reduction can be achieved by re-powering Washington State’s only coal-fired power plant, which the state is already planning to phase out, regardless of the EPA rule. Steding notes,

“However, what the AP article misses…is that the vast majority of [CO2] emissions in Washington associated with energy production come from Centralia. The numbers EPA used on this point are available in the spreadsheets here, and TransAlta [the coal plant]’s emissions account for approximately 80% of the total fossil fuel emissions of carbon dioxide in Washington. So, the phase-out of TransAlta’s facility alone (which would count under EPA’s proposed rule) will indeed mean that the goal set by EPA will be easy for Washington to meet.”

The EPA’s requirements will be easier for Washington to meet, because the state mostly relies on hydropower. The state’s Department of Commerce released a Fuel Mix Disclosure recently that reveals that, in 2012 (for when data were most recently available), hydropower accounted for nearly 70 percent of electricity generation. Because of its abundant hydro resources, Washington is less coal-reliant than other states without as much hydro potential. 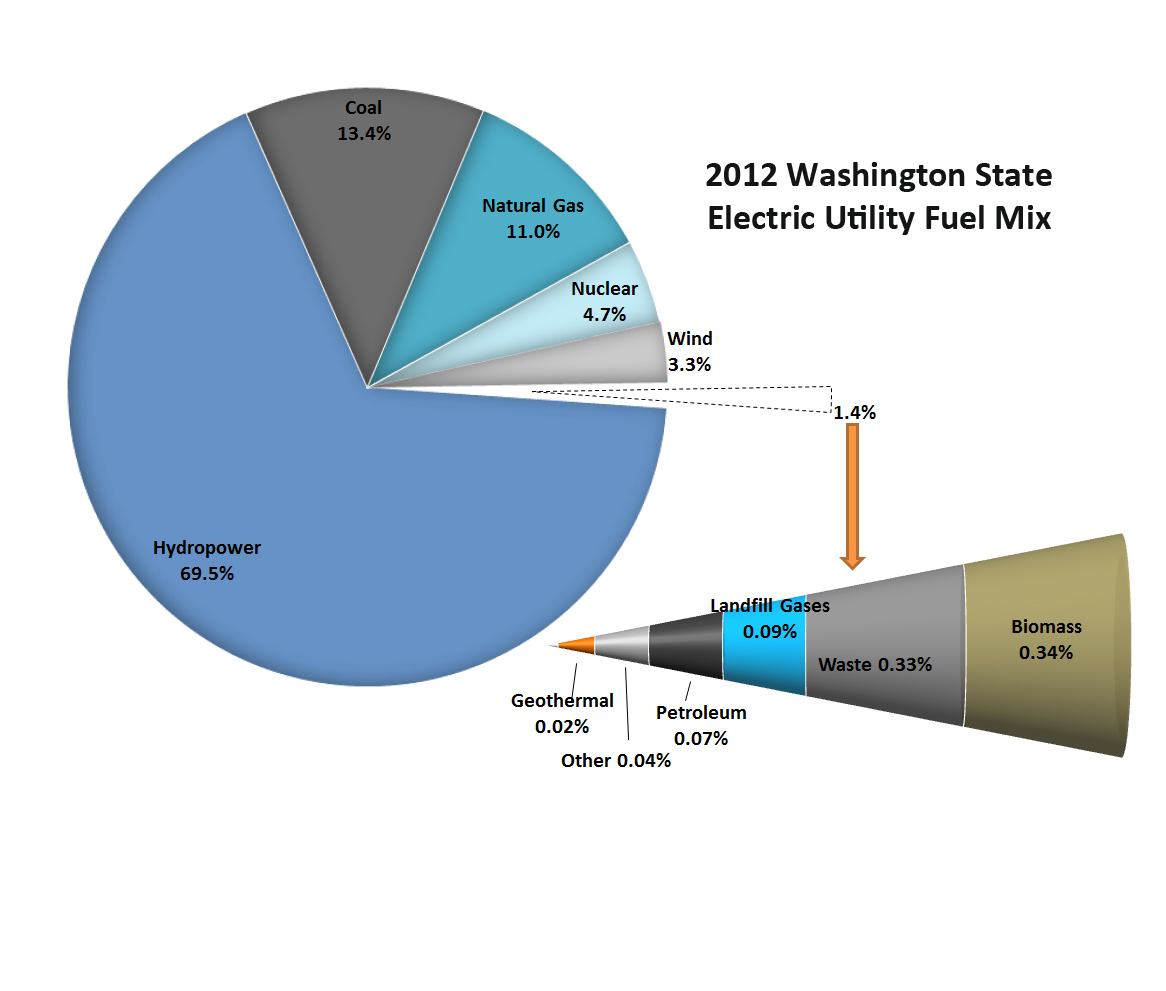 EPA’s Rule is of Dubious Legality

A few weeks ago, the New York Times disclosed that NRDC, essentially a New York-based activist law firm, was responsible for creating much of the legal underpinnings of this regulation on existing power plants. EPA needed help because the rule is very “creative.” But creative also means that it is of questionable legality.

The rule could run into legal problems. Already, pressure from the states is mounting, with Alabama and 11 other states leading a lawsuit against the EPA.. These states note that the regulations are illegal because if an industry is regulated under one part of the Clean Air Act, it cannot be regulated under another section. They explain that, if this occurred, it would amount to “double regulation”—industries being regulated twice under different sections of the same law.

Brian H. Potts, a partner and business lawyer with Foley & Lardner LLP writing in the Yale Journal on Regulation, acknowledged this same reality in 2013 when he wrote:

…if the EPA tries to adopt uniform…limits for new or existing power plants that require more than about a five percent reduction in emissions [which this rule does], it will almost certainly run afoul of the [Clean Air] Act.

EPA’s rule creates a paradox for Texas that would lead to more CO2 emissions, not less

Kenneth Anderson, a Public Utility Commission in Texas, points out in his testimony that two of the options EPA has given Texas for meeting its requirements would work at cross-purposes and increase CO2 emissions. He writes,

“Another example: “building blocks” 2 (70% capacity factor of natural gas combined-cycle generation) and 3 (increase in non-hydroelectric renewable energy megawatt hours (MWh) to 20% of the state’s  total energy produced) act counter to each other in Texas, making “building block” 1 impossible to achieve, and simultaneously worsening emissions of not only CO₂, but other harmful pollutants. “Building block” 3 assumes that the Texas renewable energy production can increase to a level above the minimum load in the Texas ERCOT market. Putting aside the timing, cost, and reliability issues, relying on this compliance alternative will likely shut down all other generation during certain times of the day, including nuclear. This creates a paradox. Texas cannot achieve both a 70% capacity factor for gas combined cycle plants and 20% renewable energy production without increasing CO₂ emissions. This occurs, in part, because the 2012 energy baseline year selected by the EPA does not give Texas any credit for the already dramatic increase in Texas wind generation that delivered 35.917 million MWh (16.24% of this nation’s non-hydro renewable generation) in 2013.”

In essence, as IER pointed out in its recently-launched “Story of Electricity,” the problem is that when the wind isn’t blowing and the sun isn’t shining, electricity needs to come from some other source—a source that can “ramp up” generation to make up for the electricity that isn’t coming from wind or solar power. Anderson goes on to explain that nuclear power is not well-suited to “ramping up” generation quickly to meet demand and that coal is more likely to be used in those situations, leading to more CO2 emissions. He also reveals that natural gas cannot solve this problem because natural gas, while suitable for “ramping up,” cannot be a baseload plant—that is, a plant that can handle round-the-clock electricity demand.

Anderson also noted that the EPA has overestimated the state’s wind generation capabilities when setting CO2 emission reduction requirements for Texas. Anderson acknowledged that, although parts of Texas are windy, wind energy is extremely inconsistent. IER has already made this point on several occasions, explaining that the wind doesn’t always blow, and storing electricity in the grid is economically infeasible.

Figure 3 of Anderson’s testimony (on page 8) points out the variability of wind electricity generation, and the drops in power production can be frequent and severe. The blue line represents the amount of wind that the weather forecasts predict will blow vs. the actual amount that blows: 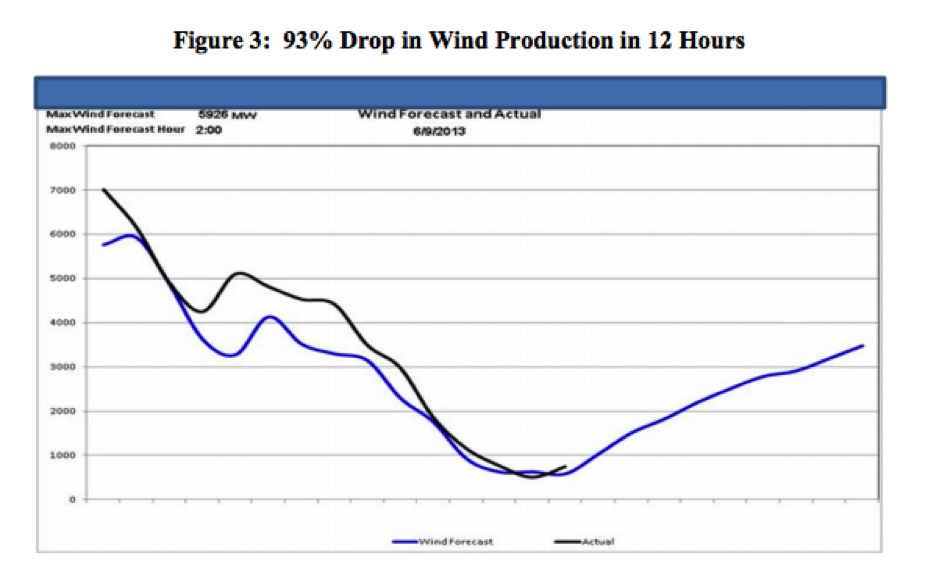 IER’s recently-launched “Story of Electricity” project pointed out how variable wind generation can be on a daily basis by including wind and solar vs. total load graph for a day in California, using data from the California ISO: 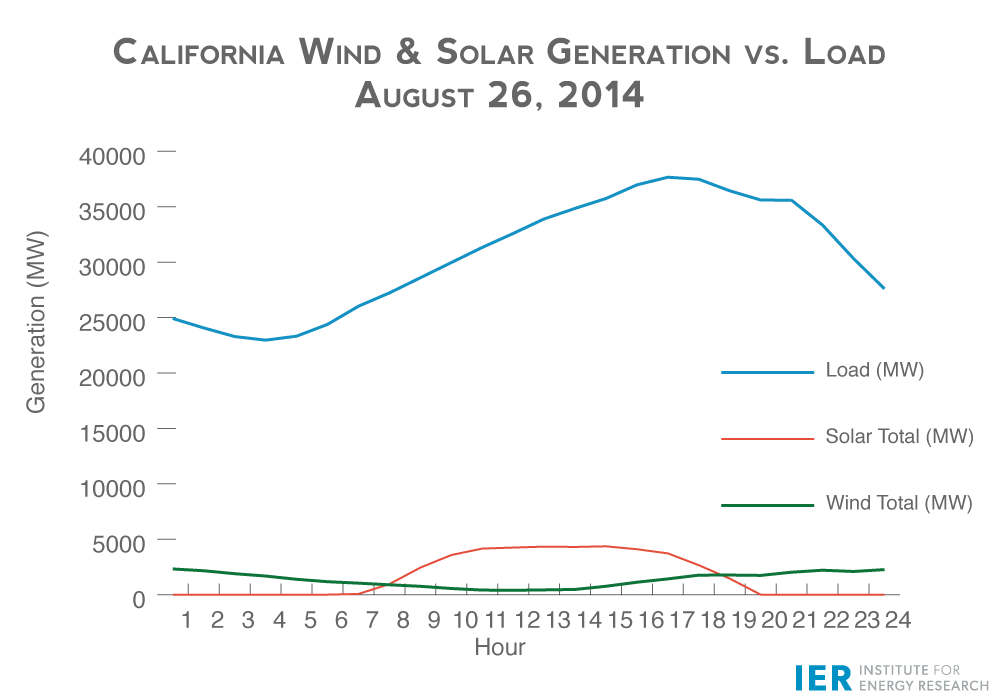 If the EPA is going to claim that wind and solar will be a significant part of electricity generation, it needs to answer questions about the reliability and intermittency of an energy source that it has strongly encouraged states to employ.

The EPA rule, if implemented, will have enormous impacts on state energy policies for the foreseeable future, and any responsible decision-maker needs to consider the effects the rule will have on all states. The rule is already pitting states against states, and this is worth seriously considering.