As debate intensifies around the Environmental Protection Agency’s (EPA) proposed carbon dioxide rule, EPA’s supporters are pushing back against claims that the economic costs of the rule outweigh the climate benefits. For instance, in a recent opinion piece for the Arizona Republic, University of Arizona law professor Kris Mayes claims that a widely cited study by NERA Economic Consulting fails to account for “energy efficiency investments that save money for consumers.”

This criticism of NERA is unfounded. In fact, as NERA and others explain, it is EPA who has failed to accurately calculate energy efficiency and other impacts, resulting in dramatically underestimated costs. Even the nonpartisan Government Accountability Office (GAO) has criticized EPA for using data that is more than two decades old, resulting in cost-benefit analyses that are “limited in their usefulness.” Furthermore, EPA’s analysis of energy efficiency is flawed because the agency assumes that even though energy efficiency measures help people, the only way people will implement these measures is if EPA mandates them through regulation.

Below we review two major studies highlighting the economic costs of EPA’s proposed rule. First, a study by NERA finds that residents in 43 states would see double-digit electricity rate hikes under EPA’s plan. NERA also criticizes EPA’s flawed methodology on energy efficiency, which means “the potential impact to the economy is likely understated.” Second, a study by Energy Ventures Analysis (EVA) shows that EPA’s Clean Power Plan, along with other agency rules, would increase electric and natural gas bills by 35 percent. EVA also discusses EPA’s flawed assumption about electricity demand, which puts EPA at odds with the Energy Information Administration (EIA), resulting in “less severe” cost impacts “than they would be under a more realistic” methodology.

In October 2014, NERA Economic Consulting released a report analyzing the economic impacts of EPA’s carbon dioxide rule for existing power plants. The report found that the rule would cost least $366 billion by 2031 and that residents in 43 states would see double-digit percentage increases in their electricity bills. Meanwhile, the benefits of compliance are miniscule: the rule limits global warming by just 0.02 degrees and lowers sea level rise by just 0.01 inch, according to EPA’s models. The following chart shows percent rate hikes by state: 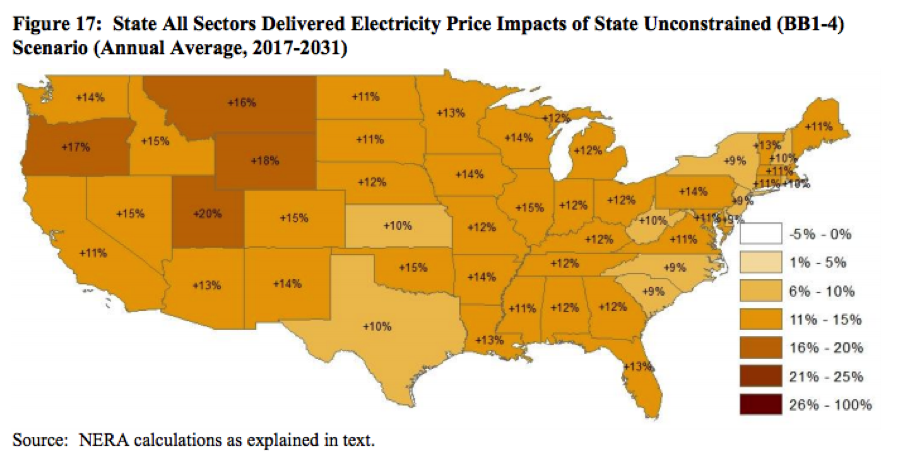 Some claim NERA underestimates the value of energy efficiency, which results in an overestimation of costs. For example, EPA claims its rule will result in only modest, short-term electricity rate hikes and actually save consumers money long-term due to energy efficiency measures.

There are reasons to doubt EPA’s cost-benefit analysis. Last year, the nonpartisan Government Accountability Office (GAO) criticized the methods EPA uses to conduct regulatory impact analyses. In one instance, EPA measured employment impacts for a particular rule using economic data that was more than 20 years old and may not have even applied to the industries being regulated. According to GAO, “Without improvements in its estimates, EPA’s RIAs may be limited in their usefulness for helping decision makers and the public understand these important effects.”

Cost-benefit analysis is a challenging but essential element of rulemaking. It requires agencies to use complex economic models to predict potential impacts for years into the future. Unfortunately, EPA is likely underestimating the economic costs of its proposed carbon dioxide regulation by using flawed assumptions about energy efficiency and electricity demand. Even the nonpartisan GAO questions the reliability of EPA’s cost estimates. The bottom line: the public shouldn’t look to EPA for a realistic assessment of economic impacts.

Forbes Op-Ed: Can The 'Tyranny Of The Status Quo' Be Broken?

Oil and Natural Gas Booms on Private and State Lands